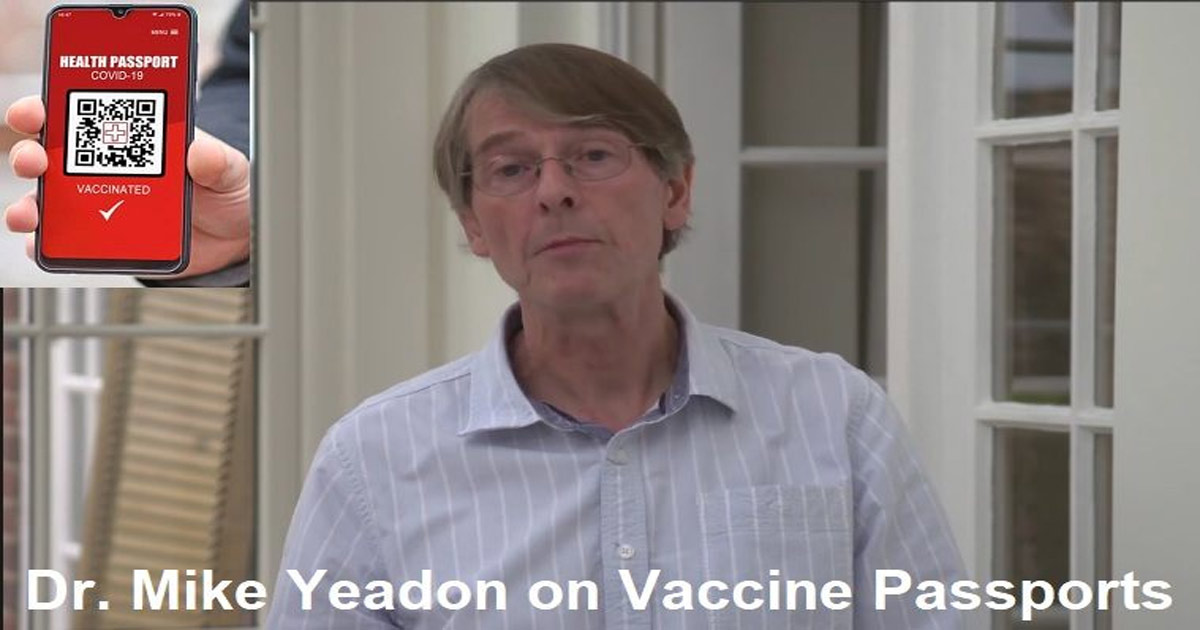 We are providing another short video clip of the interview with Dr. Michael Yeadon in the Perspectives on the Pandemic published on their YouTube channel.

In this video clip, Dr. Yeadon explains how universal vaccine passports do not benefit either the COVID vaccinated or unvaccinated, but only the totalitarian controllers who implement it, and that if they succeed, “we’ll not only be standing at the gates of Hell, we’ll just be given a little push and in we’ll go.”

After this short clip, we are republishing Makia Freeman’s excellent article from this week, “Vaccine Passports: One Passport to Rule Them All.”

This is from our Rumble channel. It will also be on our Bitchute channel.

By Makia Freeman
The Freedom Articles

Vaccine passports are a major goal of those orchestrating Operation Coronavirus, though not the ultimate end goal of the COVID agenda.

There are no clever legal arguments that can distract from this basic truth: vaccine passports are inherently discriminatory.

In a sane society, no nation that even pays lip service to care about human rights could claim that vaccine passports are in alignment with their existing laws on individual rights, freedom of choice, freedom of movement, informed consent and medical sovereignty.

However, it hardly bears stating that we do not live in a sane world. Below is a brief list of the vaccine passport schemes that are either proposed, about to be rolled out, or already in existence.

This is a worldwide agenda being rapidly promoted and implemented.

EU Planned for Vaccine Passports in 2018

Long before the word ‘coronavirus’ become a household word, or the term ‘COVID’ even existed, the European Union (EU) was planning for a vaccine passport scenario.

The European Commission (the executive arm of the EU) published a proposal for vaccine passports on April 26th, 2018 in a document entitled “Proposal for a Council Recommendation on Strengthened Cooperation against Vaccine Preventable Diseases”.

It lays out the plan for a “vaccine passport” or “vaccine card” and “vaccine portals”:

“HEREBY WELCOMES THE COMMISSION’S INTENTION TO:

17. Examine issues of insufficient vaccine coverage caused by cross-border movement of people within the EU and look into options to address them, including developing a common EU citizens’ vaccination card/passport, compatible with electronic immunisation information systems and recognised for use across borders.

HEREBY WELCOMES THE COMMISSION’S INTENTION TO TAKE THE FOLLOWING ACTIONS, IN CLOSE COOPERATION WITH THE MEMBER STATES:

10. Aim at establishing a European Vaccination Information Sharing (EVIS) system, coordinated by the European Centre for Diseases Prevention and Control (ECDC), in order to:

a. Together with the national public health authorities,

i. examine the options of establishing, by 2020, guidelines for a core EU vaccination schedule, aiming to facilitate the compatibility of national schedules and promote equity in Union citizens’ health protection, and subsequently ensuring broad uptake of the core schedule as well as a common vaccination card;

ii. strengthen the consistency, transparency, and methodologies in the assessment of national and regional vaccination plans, by sharing scientific evidence and tools with the support of National Immunization Technical Advisory Groups (NITAGs);

iii. design EU methodologies and guidance on data requirements for better monitoring of vaccination coverage rates across all age groups, including healthcare workers, in cooperation with the World health Organisation (WHO). Collect such data and share them at EU level;

b. By 2019, establish a European vaccination information portal, with the support of the European Medicines Agency, to provide online objective, transparent and updated evidence on vaccines, their benefit and safety, and the pharmacovigilance process.

Interestingly, on pg.13, this document also mentions the term vaccine hesitancy as it recommends a “Joint Action on Vaccination, co–funded by the third Programme for the Union’s action in the field of health … to address vaccine hesitancy.”

Vaccine hesitancy has also become a theme in the COVID op because so many people have become aware of just how toxic vaccines can be and how experimental these ones are in particular; in my article from August 2020 I revealed how a Yale study was analyzing how to combat vaccine hesitancy and increase vaccine uptake through a variety of psychological techniques and manipulation.

Given the above documents, it’s no great surprise that Europe is at the forefront of implementing vaccine passports.

The UK and many European countries are getting close to rolling out their passport scheme; on March 17th 2021, the European Commission proposed the following draft legislation to create a “Digital Green Certificate” as you can see from this document. In a classic example of doublepseak, Commissioner for Justice, Didier Reynders, said:

With the Digital Green Certificate, we are taking a European approach to ensure EU citizens and their family members can travel safely and with minimum restrictions this summer.

The Digital Green Certificate will not be a pre-condition to free movement and it will not discriminate in any way.

A common EU-approach will not only help us to gradually restore free movement within the EU and avoid fragmentation.

No pre-condition for movement? Not discriminate in any way?

The very essence of the vaccine passport is to regulate and restrict movement, as well as to discriminate. Otherwise, what is the point of it?

This is a constant theme of the COVID op. Politicians make rules to control your life, and right when they announce these rules, they claim they are not controlling you.

Black is white, up is down and tyranny is freedom.

They’re coming to America too. The US state of New York was the first state to introduce a pilot program.

Authorities have said it’s optional, but that’s how all these schemes of control initially work; first they’re optional to break down resistance and get people accustomed, and then they’re mandatory.

New York is calling its vaccine passport the “Excelsior Pass” and the official announcement states:

Developed in partnership with IBM, the Excelsior Pass will use proven, secure technology to confirm an individual’s vaccination or a recent negative COVID-19 test through a confidential data transfer to help fast-track the reopening of theaters, stadiums and other businesses in accordance with New York State guidelines…

The Excelsior Pass will play a critical role in getting information to venues and sites in a secure and streamlined way, allowing us to fast-track the reopening of these businesses and getting us one step closer to reaching a new normal.

On the upside, there are certain states which have preemptively banned vaccine passports in some form or another, including Florida, Texas, Arizona, Montana, and Idaho.

As for much of the duration of the COVID op, support or resistance to vaccine passports is mostly following party lines, with the left-wing Democratic states supporting it and the right-wing Republican states resisting it.

Israel has earned itself another dubious distinction by leading the world in COVID vaccination rates, and by already implementing its vaccine passport program.

“Whoever doesn’t vaccinate will only go out to supermarkets or pharmacies, while the vaccinated will go to stadiums and gyms.”

The tyranny doesn’t stop there.

Israel has also issued “Freedom Bracelets” to be worn by those entering the country from abroad.

Israel’s parliament joined action taken previously by the Spanish government in approving a law to create a registry of people refusing the COVID vax.

Interestingly, UK Cabinet Office minister Michael Gove was recently seen arriving in Israel for what they say was “vaccine passport talks” but in reality, from those who know the backstory of the Zionist New World Order (NWO), was likely his marching orders.

China and India have both joined the vaccine passport game. China called their version the “International Travel Health Certificate” (downloadable from its WeChat mobile app) while India has a QR code certificate version.

One Passport to Rule Them All

No matter what fancy and different names these passports, apps and QR codes have, there are plans afoot to link them all via a common software or framework.

This is a clear manifestation of the NWO Agenda of a One World Government with detailed information on every single person (except for the ruling elite) on Earth, who are planned to be its subjects or slaves.

This has been a long time coming.

It seems like a long time ago now – over a year ago – when Bill Gates started mouthing off about the need for immunity certificates and digital vaccine passports.

The plan is not hidden, but rather wide out in the open. Of course, there is a distinct lack of logic about the whole issue.

First of all, as I have exhaustively documented, there is no evidence that the virus SARS-CoV-2 exists.

But putting that inconvenient truth aside for a moment, why couldn’t natural immunity to the virus qualifies you for the vaccine passport?

Mainstream brainwashed medical authorities may say it’s because you can still get re-infected. However the same goes for the vaccine … hence all the talks of a 2nd and 3rd shot (actually the plan is to give people countless shots as they upgrade and rewire their DNA operating system).

This is the very same group of vaccines which by the way don’t give you proper immunity and are even admitted to only protect against mild symptoms and not to stop transmission.

Are we going to stand in our inherent sovereign rights or grovel beneath the slavemasters for government-bestowed privileges?

The truth is that vaccine passports are a scheme to force people into getting vaxxed so that they become genetically modified humans.

The vaccine is the real bioweapon, not an imaginary virus.

The vaccine passports will function to make life uncomfortable for the unvaccinated, and also as a registration system to distinguish between the vaccinated and unvaccinated, so the NWO controllers know exactly which citizens have certain nanotechnology embedded inside of them – which you can be sure will be used to further whatever nefarious goals the NWO manipulators have in mind.