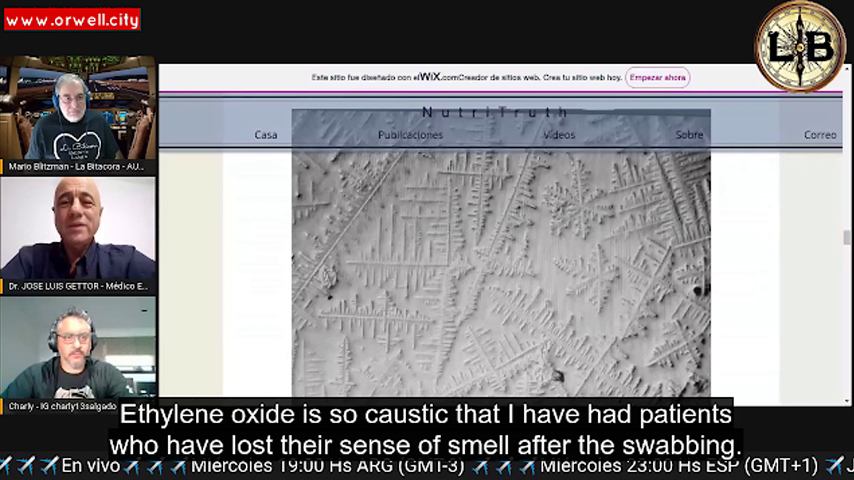 Dr. José Luis Gettor was interviewed a couple of days ago by Mario Blitzman of the La Bitácora channel. Dr. Gettor gave more details on how he became aware of part of the composition of the so-called “DARPA hydrogel” contained in nasal swabs.

In the interview, he further explains that ethylene oxide causes, in some people, permanent loss of smell.

Mario Blitzman: José Luis, I’d like you to start with the subject of the swabs. I heard something very interesting. Something that you posted and went viral everywhere, right? And it’s about what you see that swabs have. And you gave an explanation that I thought was very interesting. And I wanted you to explain a little bit about what this Defense Advanced Research Projects Agency thing is, right? You talk about this hydrogel. What’s the hydrogel? How does it work? Who did the research? What can you tell us about this topic to give us some background?

Dr. Gettor: Well. Gels, in fact, which have been booming in the last decades, are just elements used to transport substances. The case of my video that spread unexpectedly —because, I’m going to be honest with you, I had no idea that this was going to happen in this way, although we already know that this is seen by everyone—, I said it because I remembered that I hadn’t talked about swabs. It was an Instagram video, a video I made with activist people here in Argentina and with Dr. Soifer, who’s a lawyer —a patriotic lawyer— I remembered that I was about to finish the air time. And I said, “I haven’t said anything about the swabs.” And then I said, “Stop going to get swabbed like someone who goes to an infirmary to get their blood pressure checked.”

In other words, swabbing isn’t innocuous because the swab is a weapon. It has elements of military intelligence. When I said that, of course… The… The vocabulary is a little surprising, but things are really that way. These swabs aren’t sticks, as I was saying… They aren’t plastic sticks with a cotton tip that innocently sweep bacteria out of the pharynx as biochemists used to do in pharyngeal swabs.

In the past, I have indicated many pharyngeal swabs when we saw angina or pharyngitis with plaques, with white spots, in an attempt to isolate the germ, right? And people think it’s that same innocent swabbing that the biochemist did and then cultured on a culture medium. On a petri dish with agar and more enrichment elements for the germ to grow to work out the identification of the germ and assign the appropriate antibiotic. What we were doing was identifying the pathogen, right? No, no. This is by no means that innocent swab.

These swabs come from China. As if here in Argentina we didn’t have the technology to make a swab out of absorbent cotton! Look at such a basic, simple thing, that we have to bring it from China, don’t we? Just like the masks and all the supplies of all this planetary lie that has been spread in the last two years. And what I said came out spontaneously. I said, “Gentlemen, be careful because this is a weapon.”

There’s a document from the Argentine government, from the Ministry of Health in May 2005, Resolution 387 —if I remember correctly—, which among the numerous elements for sterilization of surgical elements, mentions formaldehyde, certain thermal and chemical elements, and mentions ethylene oxide. And I started to read that official document. And it instructs the reader because I found out through that document that ethylene oxide boils at 10.4ºC.

I already knew that this hydrogel is like some kind of hard gelatin because if we feel the tip of the swab, it’s hard. Then, that hydrogel enters the fauces through the individual’s rhinopharynx. The individual obviously has a body temperature of more than 30ºC, and at that temperature that hydrogel melts. When it melts, it releases the substance it has retained.

What’s very common to find is the famous alcohol gel. Everybody is cleaning their hands with alcohol gel. Alcohol gel is nothing more than a gel that holds alcohol. And that alcohol is retained until the gel dissolves. As long as the gel maintains its temperature, its consistency, the alcohol is “trapped” in there. It doesn’t evaporate. We can have a mountain of alcohol gel, look at it again an hour later, and the alcohol is still present. In fact, if we put a match near it, the alcohol ignites. What do I mean by this? Gels are substances prepared to retain and transport other substances.

And these same manufacturers, Mario, reveal, warn that this has ethylene oxide. Ethylene oxide is so caustic that I have had patients who have lost their sense of smell after the swabbing. And haven’t recovered it until now. Not to mention the many other elements that can be transported. This isn’t cotton. It’s a bundle of nylon fibers. Polyester fibers. And they’re hollow fibers that not only carry ethylene oxide, but also other components that we’re seeing in these images, in which there are particles of graphene oxide. These acquire a magnetic property in contact with organic fluids.