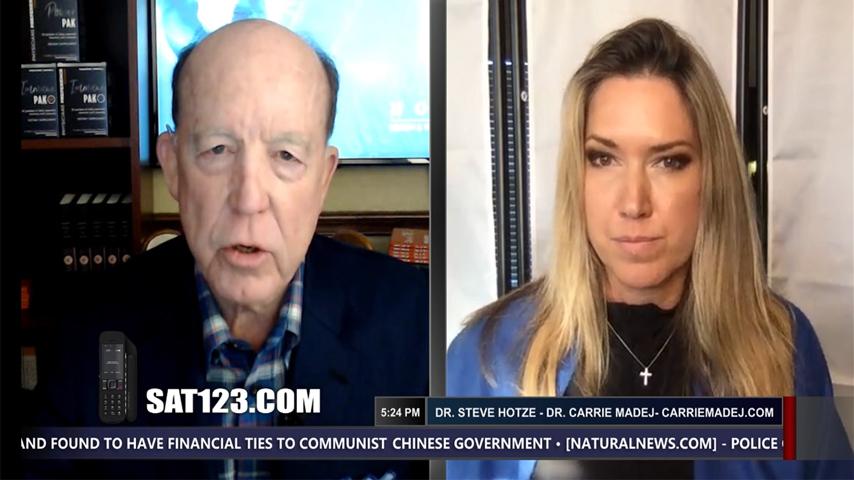 “In essence, it’s like putting your smartphone inside your body permanently so that forever there’s a two-way communication going on. You become part synthetic and part organic. And this is an example of what they call a cyborg. This is the beginning of that,” said Madej, who received her medical degree from Kansas City University College of Biosciences in 2001. (Related: Dr. Carrie Madej reveals to Health Ranger that Covid vaccines contain “exotic nanotech” for tracking and bio-control)

“And if you look at these world leaders, World Economic Forum, they claim that by 2030, they expect almost every human to have this technology inside of them. And they would be considered cyborgs. And at that moment, they could connect all humans like a cell phone to the Cloud which is the 5G. That’s why they need a big bandwidth. That’s the reason for the 5G – not for anything to be faster, it doesn’t do that.”

Madej, who completed her traditional internship at The Medical Center in Columbus, Georgia, said Big Pharma companies like Moderna and Pfizer are putting “hydrogel” inside the COVID injections and they call it a different name so that people don’t know what they’re using.

“It’s called nanolipid particles. So a nanolipid particle is technically a hydrogel. And that was very created so that you wouldn’t know what they’re doing. But if people start looking up that keyword hydrogel and looking at biosensors — there’s a company called Profuse — you’ll see everything that hydrogels can do,” Madej explained.

Hydrogel is the opposite of water. It actually sucks the water out of anything around it. Madej said that it can reproduce on its own or make more of itself aside from disassembling or reassembling itself.

Hydrogel in COVID vaccines can form toxins in the body

Madej also said that hydrogels can be used for a drug delivery system as a biosensor, and it can hold nanobots – little tiny microscopic robots that can have a multitude of functions. She added it can hold graphene oxide and magnetic particles and it can also be stimulated to form toxins or medicines in the body.

“I was told by genetic and nanotech engineers that this is a sign of a superconducting material. This is how they would know where the electronic components were in a substance. If you let it out for hours, you could see almost like self-assembly going on with the synthetic parts,” Madej said.

“And also sometimes there was a sticky material like a gelatinous material inside. I can say that every time I looked at them, this was not uniform, it was different. It appeared as though the ingredients changed over time.”

Aside from seeing graphene oxide, Madej added she also saw organism-like structures which are very analogous to water parasites like hydra vulgaris, which she found in more than one vial from different manufacturers.

The Georgia-based doctor revealed that after doing data research on hydra vulgaris, she found that scientists were very interested in the organism because they believe it is immortal. It supposedly contains the immortality gene, which they are hoping to use and put into the human genome.

“Perhaps one or two shots isn’t going to completely change you. I don’t know how many shots it will take. The manufacturers don’t know either. They’re experimenting on us. But if you go ahead and you continue to take these shots and booster after booster, well, at some point, yes, you’re not going to be totally human anymore,” Madej said.

“The genetic changes that will happen and the amount of synthetic substance inside of you can be so great that [there will be] more of that than [there] is [of] a natural, organic human.”