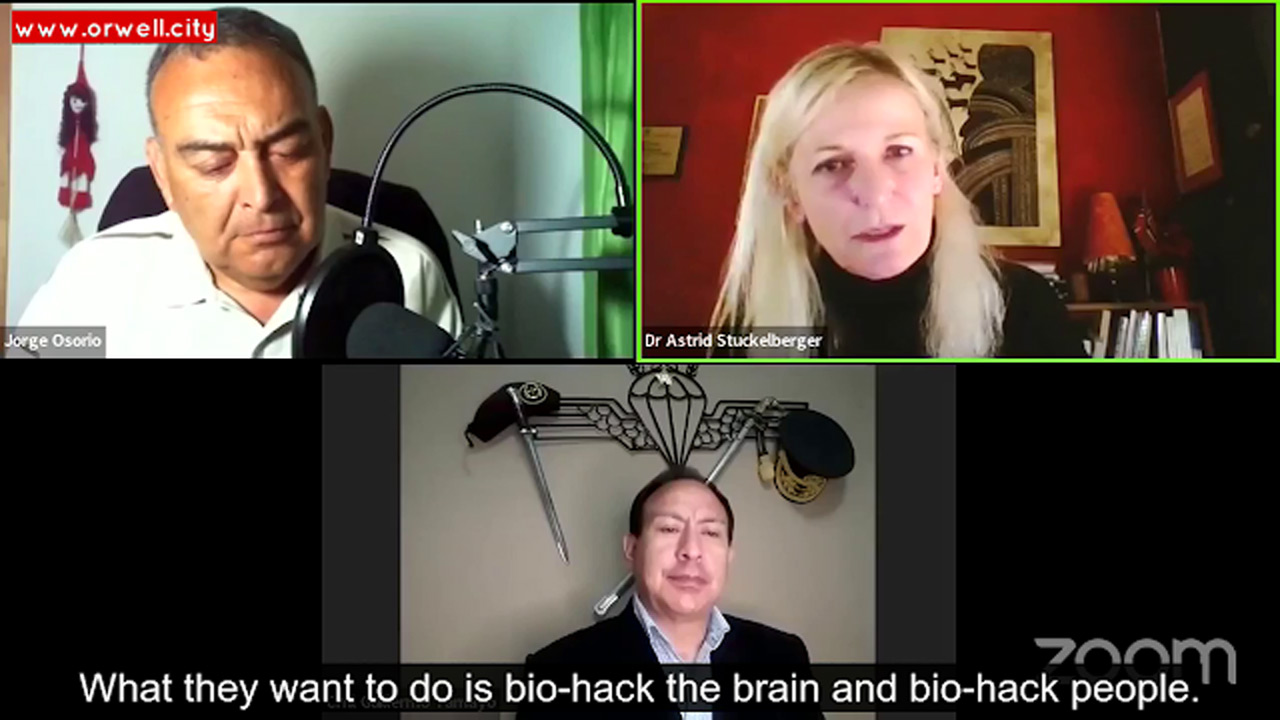 In the same interview that CONUVIVE Mundial conducted with Dr. Astrid Stuckelberger two days ago, the scientist commented on the relationship between graphene, 5G, and Neuro-rights.

One mind-blowing point is that the technology that’s being injected into the population would make it possible to intervene in human beings to send them virus imprints and make them sick, among other possibilities.

Dr. Stuckelberger emphasizes the need to become aware of this and start a detox from the graphene present in the body since it’s thanks to this nanomaterial that the bio-hacking of the human being is possible.

Jorge Osorio: Doctor, I’d like to ask you… Because I was just going to ask you about Dr. Pablo Campra’s report. And you already brought it up. In this same line, what do you think about graphene —which is a nano-conductor—, electromagnetic waves, and 5G?

What could we be talking about, in your opinion? Graphene, 5G, and Neuro-rights.

Dr. Astrid Stuckelberger: What are Neuro-rights? Can you just explain?

Jorge Osorio: The Neuro-rights Law establishes —the Chilean President of the Republic said it here— that your thoughts could be intervened. He regularized it as a law.

Dr. Astrid Stuckelberger: OK. Yeah, that’s… We’re coming to a very interesting topic. So, Dr. Charles Morgan… And I invite you to go and see it on YouTube. Bio-Psycho-Neurology. He made a YouTube video of 58 minutes. And it’s fantastic.

He’s teaching the military about this new DARPA technology in 2018. And in this… And it’s an eye-opening video, really. And in there, he says —about graphene oxide in nanoparticles—, that they were doing experiments —with monkeys, first— of the transmission of thought patterns. They can read or transmit thought patterns.

And they were taking the example of a surgeon. Of course, they want to make it look like it’s good, but you can also use it badly. So, they took the example and said that, if a neurosurgeon wants to make an operation in the Philippines and wants to take control of a person’s hand by his thinking, they can analyze his pattern lighting… We’re electric beings. We’re bioelectronic, so it’s easy to see the pattern. And then they transmit… The person has graphene, and they can transfer the pattern by WiFi. And the person in the Philippines gets the hands going into a pattern of a surgeon. And the person even says, “Oh, it’s very strange. I don’t even do anything, and I’m directed by this program.”

So can you see where I’m going? I’m going to this zombie pandemic because what they’re doing now is that… Yes. Professor Campra came to the conclusion that, in fact, this bioelectric graphene is able to receive information and change the body because it’s everywhere. It’s everywhere, and it even goes in the brain. So, of course, it can have a toxicity. So… The endpoint of this is that they’re going to… What they want to do is bio-hack the brain and bio-hack people. And yeah, that’s what I wanted to say.

I want to make the link with David Martin. Dr. David Martin is a patent expert in the USA who spoke to Reiner Fuellmich, in his debate (program). And he said something very important. I invite you to go and see his video with Dr. David Martin. He gives a clue. He says that he was responsible to give the patents of coronavirus and of the vaccine. And he was doing a mea culpa. He said, “I’m very sorry because I should have never accepted those patents because they aren’t biological. They are synthetic modélisations of the virus.”

And when you go and see into some of the documents of Bill Gates, you see in the back the… I have put this in the report. I can give it to you so you can translate it into Spanish. They have put the number of the patent of the synthetic modélisation of many diseases. Marburg, also.

So what they’re doing is: they have modelized a synthetic message to send through Wi-Fi, through 5G. Because the band is so potent, it’s going up to terahertz. Because of the ionization that increases 1000 times. That’s what La Quinta Columna says. It goes up to terahertz, so it can get the information very quickly.

So, the first thing is that people have to stop this receptor. The graphene. Because they’re going to get the information and will be sick. It’s not a biological virus. It’s a synthetic nanoparticle. Biotech through WiFi. And you can already, you know, transmit through your computer. Information.

This is crazy. But now, I see that it has been used for the collection of data with the PCR —in the nose—, the mask, the antigenic test. They’re getting it through WiFi to the databank because there’s a hydrogel, and there’s everything to make this transmission.

OK, so this is what I’m saying. We’re in a world where they have kept us ignorant in medicine and science. And they have gone very far into what we’re doing now. We’re electric beings, and we can get the imprint of a virus. hat’s why we have to protect ourselves from 5G. From our phone. Even the phone. You hold it like this, and the graphene comes up. So we have to stop using the phone like this. We have to use it like that. Not having it in our pockets, not sleeping with WiFi, etc. And to detox with zinc, glutathione, and N-acetylcysteine, for example.