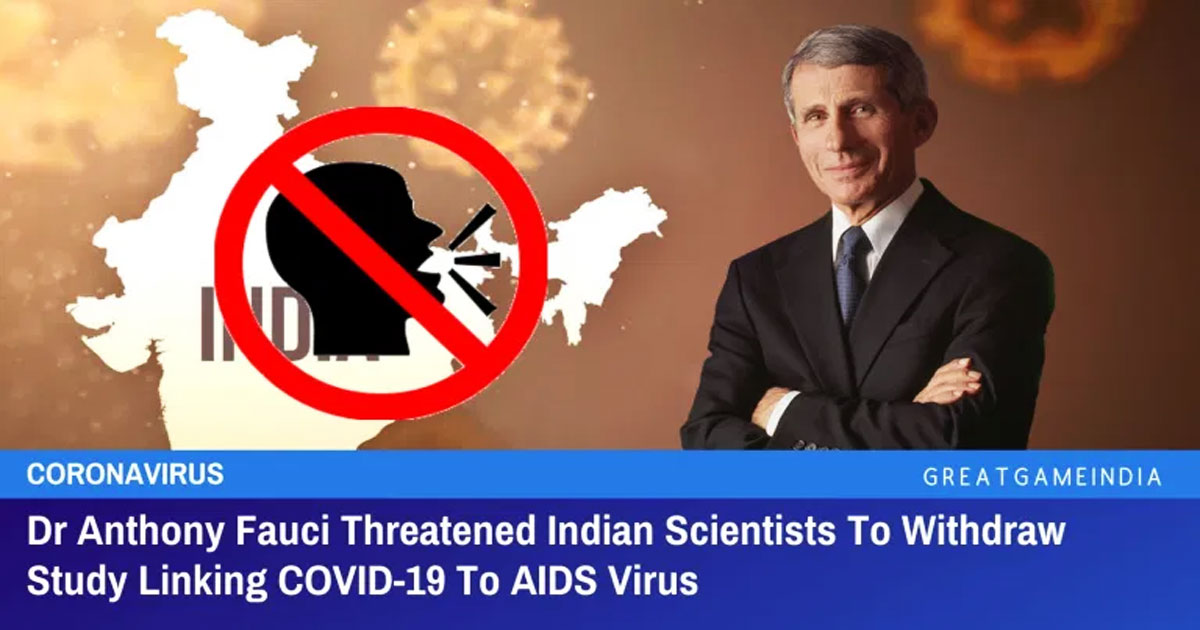 Last year group of Indian scientists discovered that coronavirus was engineered with AIDS-like insertions. After GreatGameIndia published the results of the study, it attracted heavy criticism to an extent that the authors were forced to retract their paper. Now, Fauci’s Emails reveal that it was Dr. Anthony Fauci himself who threatened the Indian scientists and forced them to withdraw their study linking COVID-19 to the AIDS virus.

Last year, a group of Indian scientists discovered that coronavirus was engineered with AIDS-like insertions. The study concluded that it was unlikely for a virus to have acquired such unique insertions naturally in a short duration of time.

Readers of GreatGameIndia would remember how after we published the results of the study, it attracted heavy criticism from social media experts to an extent that even the authors were forced to retract their paper.

Dear @GreatGameIndia
It appears that one of your study concerning HIV insertions inside coronavirus made it to a Nobel prize winner, Luc Montagnier https://t.co/82BMeFiAhq

He discovered HIV was nominated for a Nobel prize in 2008/2009. He was inspired by an Indian group.

Later, none other than the French Nobel Laureate Luc Montagnier himself confirmed the conclusions of the study.

It was in this context that the Batwoman of China, Shi Zhengli said, “I advise those who believe… academic analysis of Indian scholars, to shut their stinking mouths”.

This was claimed months ago by our local Satyanveshi (Truth Seeker) @GreatGameIndia. Unless, US confirms it, we don‘t blv anything. https://t.co/royVdYkXYm

Concerns about the manmade origin of the virus and the implications of the findings of the study were raised with Dr. Anthony Fauci as well, but he chose to remain silent and ignore it.

Now the Fauci Emails show that when he was asked about this research paper by the Indian scientists, he had dismissed it saying it is “really outlandish”. Several other emails have also shown that Dr. Fauci was warned that COVID-19 may have been ‘engineered’, but he had dismissed all of them.

A leading infectious disease expert, Kristian Andersen, emailed Dr. Fauci referring to the Indian study saying that some of the features of the virus looked engineered. But he did not announce it in public. This reveals that Dr. Fauci was already aware of the man-made nature of the virus but he did not inform the public about the same.

Further, Professor Madhav Nalpat, the Director of the Department of Geopolitics & International Relations at Manipal University claimed on Indian television that Dr. Fauci threatened to tarnish reputations and destroy the careers of scientists.

“What is even more disgusting is the cover-up. Any scientist who spoke up was strictly warned that his career would be destroyed should he speak against Dr. Fauci,” said Prof Nalapat.

This fact was also revealed by Josh Rogin, a columnist of the Washington Post who claims that scientists don’t speak up about issues connected to Dr. Anthony Fauci’s research. Rogin also claims Fauci is the ‘Godfather’ of gain-of-function research that was taking place at the Wuhan laboratory which was then named as the site of the coronavirus outbreak.

Josh Rogin appeared on Megyn Kelly’s podcast, where he said – ‘I often talk to scientists who say the same thing, who says, “Listen, we really want to speak out about this, but we can’t do it.”

Ashutosh Kumar Pandey, one of the researchers of the study had earlier said that they stand by their conclusion that the SARS-CoV-2 is not natural. “We said this in Jan 2020, we are saying it again”, he had tweeted.

If published this will be tight slap on the cartel of Virologists who are hell bent to make this virus natural. SARS-CoV-2 is not natural. We said this in Jan 2020, we are saying it again.

He said clearly referring to Dr. Fauci, that the paper was outlandish for those who wanted to prove the ‘natural origin’ theory for the virus. He said that their study had correctly identified sections of the genome that are giving this virus its specialty.

When asked why they had withdrawn the paper, he said that was withdrawn due to the pressure from the people with vested interests.

Pandey also said that this paper was just a section of the different studies that they had conducted and they wanted to include the entire findings in the updated version. But the revised manuscripts were hard-blocked by the publishers.

He said that in the revised manuscript, they have provided information on why the virus infection remains asymptomatic and why it infects human beings so easily. But it never was allowed to come out, he said.

It matters whether you are the part of the collegium that controls the narrative in science or not. If someone isn't then it's insignificant.

Commenting on how a scientific paper is being blocked to favor a particular agenda, he said, “Science is the new medieval church, those who are popes of it censor at their will”.

Meanwhile, Dr. Fauci himself funded gain-of-function experiments at Wuhan lab through Peter Daszak, the President of EcoHealth Alliance by the US Government.

The interesting part is that Peter Daszak is the same guy who orchestrated the publication of a ‘scientific’ paper in Lancet claiming that the virus made the cross-species jump naturally.

How can the same guy who funded the experiments to make the cross-species jump of the virus, claim that it evolved naturally?

If you think that’s outrageous, well just wait for it.

Peter Daszak is also the same guy the WHO sent to China to investigate the claims whether the virus evolved naturally or was coronavirus engineered.