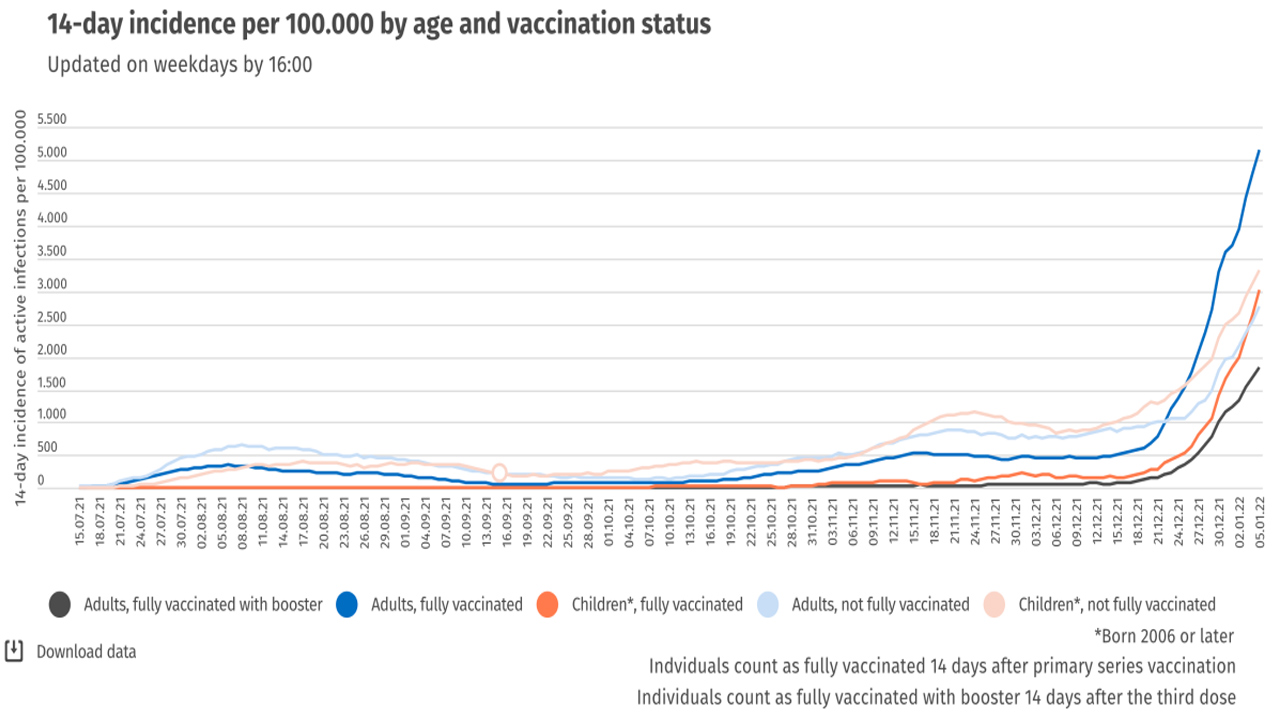 The double-vaccinated are twice as likely to be infected as unvaccinated people, data from Iceland shows. This is the same pattern as found in data from the U.K. Thorsteinn Siglaugsson has written about the trend in Morgunbladid, the main national newspaper in Iceland, and put up a translation on his website.

This change can hardly be explained away by changes in behavior, such a sudden and decisive change of behavior between groups is impossible. It is also unlikely that testing has suddenly increased this sharply among some groups and not others. We know the protection against infection from vaccination wanes rapidly, but it is out of the question that it should drop so suddenly. The most likely explanation is the new omicron variant. Foreign data also indicate that the currently available vaccines have little or no effect against omicron infection.

The data published on covid.is are weighted, the different size of the groups is adjusted for. This means we can use them to conclude the probability of infection. At present, triple-vaccinated people are only 30% less likely to get infected than unvaccinated adults, and for vaccinated children, the difference is only 15%. This small difference decreases rapidly in both groups. The biggest news, however, is that double-vaccinated people are now 90% more likely to get infected than unvaccinated. This suggests that the protection provided by two doses of vaccine is in fact less than none, it is the opposite.

(After this article was published in Morgunbladid, the main national newspaper of Iceland on January 8th the Icelandic chief-epidemiologist has tried to explain this away by claiming the number of unvaccinated people is overestimated in the data. The problem is that if this was the fact they would have had to overestimate this figure by 90% to get the rate for the double-vaccinated down to the level of the unvaccinated. This is very unlikely for official data, published daily for over six months and quoted by the responsible officials at least weekly. A 5-10% error might be tolerable, but it would only bring the difference down to 70-80% instead of 90%.)

There is a fairly clear trend in the data. If this development continues, it can be expected that very soon the low level of protection afforded by triple vaccination will be completely gone – the boostered will be just as likely to be infected as the unvaccinated, and the same goes for vaccinated children.

It is surprising that this massive change in the incidence of infection has not yet found its way into the media, and no less that such drastic changes seem to have no effect on government policies, neither the misguided plan for vaccinating healthy children who are at very low risk from the virus nor plans for discrimination against people based on the number of vaccine doses they have received. It is the duty of the government to base its actions on facts and review them when the facts change. This is what they must do now.

How to Protect Yourself from Vaccinated People

Pharmakeia, The ‘GOD GENE’, and Just What is The Real Target of The COVID-19 Vaccines that were Rushed into Production and Forced On Us

Reiner Füllmich and 50 lawyers: ‘The vaccines are designed to kill and depopulate the planet’