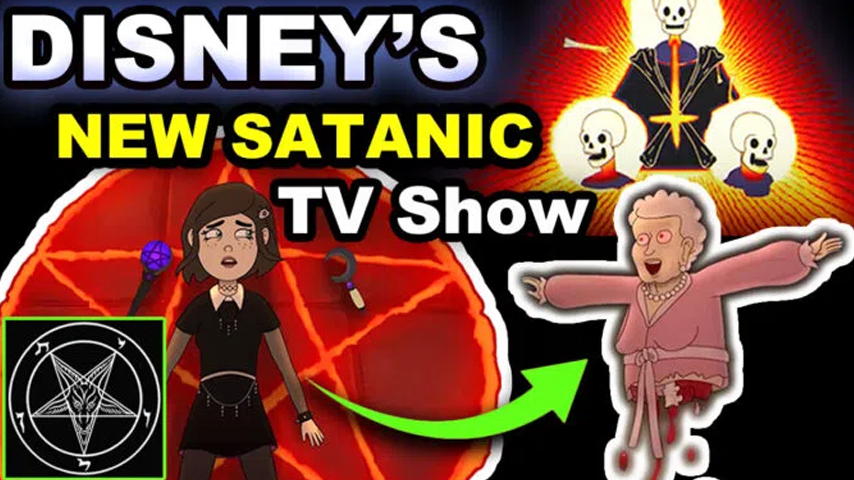 There is something very wrong with Disney’s new animated series “Little Demon” and its Executive Producer Dan Harmon. The main protagonists of the show are Satan and his 13-year-old daughter (who happens to be the Antichrist). Why would Disney produce such a show? Let’s take a look at the show and expose the evil forces behind it.

As you can see, there is a lot of money and Hollywood star power behind Little Demon. Also, mainstream media outlets have been enthusiastically hyping the show in every way possible.

With that being said, here’s the title screen of the show. Take a look at the background.

The background contains the real, actual logo of the Church of Satan, a real, actual organization that really exists.

This is the sigil of Baphomet – the official logo of the Church of Satan.

Why would the actual logo of an actual organization be used in a fictional show? Are Hollywood Satanists using mass media to proselytize their “religion”?

The show’s official synopsis provides us a clue:

Thirteen years after being impregnated by the Devil (Danny DeVito), a reluctant mother (Aubrey Plaza) and her Antichrist daughter (Lucy DeVito) attempt to live an ordinary life in Delaware, but are constantly thwarted by monstrous forces, including Satan, who yearns for custody of his daughter’s soul.

While the premise of the show might sound “creative” to some, it is not. It is extremely similar to series such as “Chilling Adventures of Sabrina” where the protagonist is a teenage girl who goes through relatable situations such as going to high school and chilling with friends. The twist: She’s “special” and “powerful” because of Satan and witchcraft. It is a well-established narrative that happens to be extremely manipulative by tapping into the desires of young people.

A quick look at the trailers of the show makes one fact about it immensely clear: It is all about the ongoing agenda of normalizing (and even glorifying) Satanism and the general concept of evil to the masses.

You do not have to watch the entire series, but a simple look at the various trailers available online is more than enough to confirm another fact: Little Demon is drenched in the occult elite’s agenda and symbolism.

Satan gives the main protagonist cool powers that allow her to fight back against bullies at school and such. The message: Satan is your friend. Another message: Witchcraft is female empowerment. Also, notice the All Seeing Eye in her hair. It tells you that this show was sponsored by the occult elite.

In fact, if you are paying attention, the one-eye sign is all over the place in Little Demon.

In another trailer, we see Satan discovering that his offspring is a girl. He immediately responds: “The future is female!” By using this feminist quote, Satan becomes cool, accepting, and inclusive.

The mom in Little Demon is a cool, bad-ass, tattooed witch with occult powers. Also, she procreated with Satan himself and bore his child.

Little Demon portrays occult rituals and blood sacrifices as activities that are fun and exciting. Many other series targeting teenagers and young adults convey the same message.

Another trailer features an unholy trinity and an inverted cross. This is unfiltered satanic symbolism being flashed on the screen. Is this still entertainment? For children?

The shocking ending to the LSU opener was not the most disturbing part of the game last night. For me, that came during a commercial break in the second quarter when the television audience was presented with the trailer for a new FX cartoon “sitcom” entitled, “LITTLE DEMON.”

I couldn’t get to the remote fast enough to shield my 11-year-old from the preview, and I wonder how many other children were exposed to it—and how many millions more will tune in to the new series, owned and marketed by DISNEY.

The trailer included dark images of Hell, demons, and satanic imagery, and an explanation that the main character is… the Antichrist(!).

Disney provides this surreal description: “Thirteen years after being impregnated by Satan, a reluctant mother, Laura, and her Antichrist daughter, Chrissy, attempt to live an ordinary life in Delaware, but are constantly thwarted by monstrous forces, including Satan, who yearns for custody of his daughter’s soul.”

The actress who voices Laura said in an interview, “I love that we are normalizing paganism. Laura is a pagan. She’s a witch. She’s jacked.”

Another online review explains that Chrissy discovers she’s the Antichrist “in grisly fashion, quickly reducing a gaggle of school bullies into piles of red goo in what turns out to be the first of many spectacularly gory sequences. Chrissy doesn’t seem overly concerned by the whole triple-murder thing, shrugging it off with an easy-breezy attitude that sets the tone for the rest of ‘Little Demon.’”

“Most of the show’s best moments come when it leans into its hellish premise and plumbs the depths of its own depravity. It’s likely you’ve never seen a man punch a hole in his own face before or heard the words, ‘Let’s go boil some babies while their heads are still soft’ in quite that order and, after two decades of South Park, Family Guy, and other cartoon shock merchants, an animated series finding new ways to disgust is a genuine achievement.”

WHAT IN THE WORLD?!?

I could write volumes this morning, and unpack pages of Bible verses here, but instead I’m just going to state the obvious: Please be careful. Our job as parents is to guard the hearts and minds of our kids. This culture has become alarmingly dark and desensitized and this is not a game. Disney and FX have decided to embrace and market what is clearly evil. STAY FAR FROM IT.

“Be sober, be vigilant; because your adversary the devil prowls around like a roaring lion, seeking whom he may devour.” (1 Peter 5:8)

As described above, the show contains gore, nudity and jokes about killing babies. Disturbingly, the show’s executive producer Dan Harmon has been making jokes about abusing babies for a while.

In 2009, Dan Harmon created a comedy short called Daryl – a parody of the series Dexter. And it was awful. The main reason: He rapes a baby. Twice.

In 2018, 4Chan users uncovered Daryl and exposed the world to its awfulness. Alarmed by the fact that people were on to him, Harmon promptly deleted his entire Twitter account.

What was the link between Daryl and his Twitter account? It is still unclear. My guess is that his account probably contained pedophile jokes. A few days prior, Hollywood director James Gunn had gotten into trouble for tweets about him wanting to abuse young boys.

But Harmon did not get into trouble. Mass media flew to his defense and the video was all but scrubbed from the internet.

Here’s a quick summation of what happens.

Dan Harmon plays the role of a psychologist. At one point, he sneaks into his patient’s house and says:

“Thank you for being such a good patient, for taking all of the sleeping pills I prescribed to you so that, later tonight, when I’m crawling in your window, I can count on you to sleep like a baby … while I do everything but sleep with yours”.

Then, Harmon sneaks into the baby’s room, takes off his pants, and rapes the baby.

Later, Harmon’s character convinces another patient that the only way to cure his baby is to rape it.

Harmon takes off his pants (again) and rapes the baby in front of its father. The show ends with Harmon saying that he really enjoyed it. Apparently, this is what passes for “comedy” in Hollywood today.

I’m deeply sorry about these screenshots. But we collectively need to face some cold hard facts. This man, who rapes a baby twice in a short film, is currently producing a show about Satan and the Antichrist. It has a huge Disney budget, it is full of Hollywood stars, and it is praised by mainstream media. What else do you need to know about the entertainment industry and the entire elite system that supports it?

Little Demon is perfectly in-line with the satanic agenda that has been permeating mass media for years. It is all about countering people’s natural aversion to the concepts of evil, satanism, and demonic possession by making them fun, relatable, and entertaining. Through mass media, Satan stops being “the adversary” that represents all that is sick, cruel, and perverted and becomes a dad who looks out for his daughter. Satanic possession stops being a soul-destroying ordeal and becomes a potent way to gain superpowers.

One must be blind not to see that the world is being swept by a massive wave of indoctrination. Christianity is being demonized. Mass media is making satanism the only “religion” to be allowed mainstream praise and exposure.

What about the fact that real actual Satanists perform real actual black magic rituals, blood sacrifices, and child abuse? Well, they’re trying to normalize all of that too. Because those behind Little Demon are big, fat, disgusting demons.