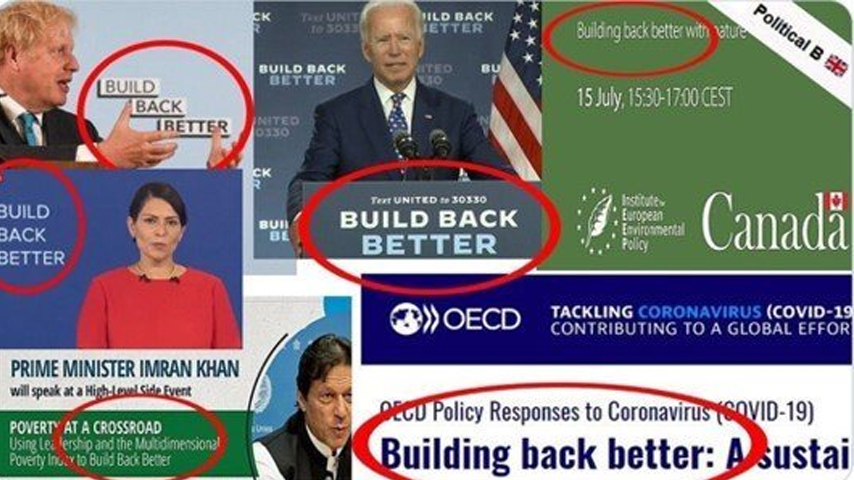 Let’s not forget the big picture amid all the noise of the “news” this week about war and trucker convoys and staggering inflation.

Let’s stay focused on the broader issue of what’s going on and calmly prepare for the logical progression of where this is all leading. I say this because it’s beginning to look like God is allowing end-times scenarios prophesied in the Bible to come to pass.

Globalist power elites have clearly pushed the button on their long-awaited “final solution,” to use Bill Gates’ phraseology. Maybe it’s better described as their final stage or end-game scenario.

Whatever you wish to call it, we are witnessing the final chess moves in the globalists’ long-planned takedown of Western civilization, which they want to replace with a transformed, transhumanist, godless, wicked-to-the-core new world order under which they control everything.

When a group of conspirators is in the final stages of a coup d’état, when they believe they have checkmated every conceivable opposition, they are no longer afraid to reveal their true nature. They have bared their authoritarian fangs, ala Justin Trudeau, and are proud of it. They are no longer worried about elections (what a quaint thought). They also do not seem at all concerned about outbursts of peaceful protests, where citizens flood into the streets with signs and chants or ride into town on heavy trucks.

They will use whatever means necessary to clinch the deal and implement their new world order, aka “Great Reset.” They will use pandemics, bioweapons, climate change hysteria, cyber-attacks, false-flag attacks and even world war if that’s what it takes to finalize the destruction of Western civilization. This is all justified in their eyes so they can “build back better” on the ashes of that once-great civilization. They sense that after more than 75 years of cultural Marxist propaganda attacks, this once-dominant civilization has grown weak and soft. In short, they smell blood in the water and are ready to pounce. It is time.

Much of what I’ve been reporting for the last two years has been about how the pandemic is being used as a bludgeoning tool to usher in two things, a global digital ID system and a global digital money system, both of which will be used as hammers to force people worldwide into the biblical beast system. There’s a strong argument to be made that this beast system will closely resemble Hitler’s Third Reich, only it will be much worse because today’s power elites, who think almost exactly like those Nazis of the 1930s, have so much more technology at their disposal. They have artificial intelligence to spy on us and predict our thoughts, and they have gene editing and gene therapies to create their superhumans devoid of any human compassion or ability to think critically and independently. Orders are given and orders are followed. Those troublesome free wills inherent in the old humans have been largely stamped out, and they can deal harshly with the remaining troublemakers while being cheered on by the new transhumans who have joined their cult.

This beast system is now at our doorstep. And in light of what’s gone down in Canada, it’s in a much clearer view than it was even two months ago. The globalists had a well-thought-out strategic plan. Scare the heck out of people through mind-numbing propaganda being put out by the corporate-owned media and the corporate-owned medical-pharma complex, using the fear to lock them down and strip away rights and freedoms, while demonizing anyone who is not afraid of the virus and wants to go on living as they always did.

After a year and a half of wearing people down with propaganda and taking away their freedom, then they step in and offer the solution, and here’s where the real deception kicks in, requiring people to buy back some limited freedoms by submitting to dictate that can be issued by a single man or woman, not their elected legislatures. These dictates were billed at first as temporary necessities meant to deal with a crisis, but that was a lie. They were never meant to be temporary. They were meant to reorder every facet of your life, including your freedom of movement, where you can work, what you can say, what you can eat, how you worship God, what gets injected into your body. And everything is now monitored and assessed in real-time using AI-driven apps on your phone.

If you don’t submit to the injection and grant the elitist cabal total rights over your body and the reordering of your life, then you are basically declared a non-citizen and have no rights. You may be a citizen of your country, loyal to your Constitution and Bill of Rights, but that doesn’t matter anymore. All of that has been bypassed and rendered moot by the crisis. They are looking for global citizens willing to join the new global order. The Fourth Reich. Which is like a cult. You follow their dictates, which they call “science” but have no connection to actual science. Fauci said “I am science,” meaning whatever he says, no matter if it contradicted what he said last week, must be followed instinctively. He is your new god or one of the new pantheons of gods. Get with the program. “Why can’t those truckers just do what they’re told?” You actually hear that kind of talk all over social media.

They believe they can implement this system now because they have spent the last 50 to 75 years infiltrating all the key positions of power in our society with people who will instinctively follow orders, whether they agree with them or not, often for no other reason than to keep their paycheck coming in and their bills paid. They’ve lost the ability or the courage to think critically as individuals. It’s easier to go with groupthink.

None of this could have been done 20 or 30 years ago because the power centers within society were still too disparate and diffused. But after years of consolidation in all the major industries, whether it be the media, medical services, banking and financial services, transportation, and manufacturing sectors, they are all controlled at the very top by the same type of people. If you do your research you will find that all of the world’s biggest corporations are majority-owned by the same elite group of people at Blackrock, State Street, Vanguard and a few other massive money-management firms. With this level of monopoly interest, there is nothing of import that they don’t control. If they don’t outright own it, they can control it, because everyone needs to eat. Everyone needs an income. And those incomes are all dependent, ultimately, on the same upper echelon of big banks and corporations.

So now is the time for their end game. Don’t lose sight of their goals. Digital money. Global digital ID. Fake meat. Self-driving electric cars. Obedient churches. Obedient global citizens. Those who are disobedient and unwilling to join this new authoritarian system, those who reject the lies of the corporate media, will be increasingly ostracized, demonized and singled out for punishment. This is Matthew 24 time. The right will be called wrong. Deception will rule. Persecution will target and trample the believers. But it won’t last long, so keep the faith and prepare to put on your spiritual game face. We will endure till the end.

The short article below dovetails with the one I authored on Dec. 3, 2021, titled The real agenda behind the mad dash to get every child injected against a virus that won’t affect them, in which I quoted from a Gates-funded Gavi document that jibes with the WEF document cited by this author.

The World Economic Forum, an international organization that works to “shape global, regional and industry agendas,” recently published its latest dystopian proposal – a far-reaching digital ID system that will collect as much data as possible on individuals and then use this data to determine their level of access to various services.

This digital ID proposal is outlined in a report titled “Advancing Digital Agency: The Power of Data Intermediaries” and builds upon a digital ID framework that the WEF has published previously.

Under this framework, the WEF proposes collecting data from many aspects of people’s “everyday lives” through their devices, telecommunications networks, and third-party service providers.

Once the digital ID has access to this huge, highly personal data set, the WEF proposes using it to decide whether users are allowed to “own and use devices,” “open bank accounts,” “carry out online financial transactions,” “conduct business transactions,” “access insurance, treatment,” “book trips,” “go through border control between countries or regions,” “access third-party services that rely on social media logins,” “file taxes, vote, collect benefits,” and more.

In this Advancing Digital Agency: The Power of Data Intermediaries report, the WEF positions this digital ID framework as the part of the solution to a “trust gap in data sharing” and notes that vaccine passports, which were mandated across the world during the COVID-19 pandemic, do “by nature serve as a form of digital identity.”

The WEF also praises the way vaccine passports have allowed governments to harvest data from their populations without “notice and consent”:

“At a collective level, vaccine data is an incredible public health asset. The United Kingdom Government in particular has acknowledged this and has suggested that anonymization, pseudonymization and data shielding techniques could be harnessed in a controlled environment to allow for the reuse of that highly sensitive data. In such cases, notice and consent is not required per se for the reuse of the data but the intermediary processes the data undergoes must be done in a controlled environment so that the findings of the data set are made available rather than the data itself.”

The WEF provides a specific example of how digital IDs could be used to authenticate a user (by using fingerprints, a password, or identity verification technology) and decide whether they should be granted access to a bank loan by judging their profile (which may include their biometrics, name, and national identity number) and history (which may include their credit, medical, and online purchasing history).

The WEF goes on to suggest that digital IDs will “allow for the selection of preferences and the making of certain choices in advance” and ultimately pave the way for “automated decision-making” where a “trusted digital assistant” “automates permissions for people and effectively manages their data across different services” to “overcome the limitations of notice and consent.”

This push for an invasive digital ID system from the WEF follows it proposing other similar surveillance systems such as turning your heartbeat into a digital ID. Throughout the pandemic, the WEF has consistently advocated for vaccine passports and digital ID.

Beyond these specific proposals, the WEF is infamous for its globalist and transhumanist agendas such as the “Great Reset” (which proposes that people will “own nothing” and “be happy”) and the “Fourth Industrial Revolution” (which, according to WEF founder Klaus Schwab, will lead to “a fusion of our physical, our digital, and our biological identities”).

Governments and private corporations are increasingly embracing digital IDs. Some governments are also pushing a similar notion – social credit-style apps that monitor citizens’ behavior and reward them for engaging in state-approved actions.

Ron Paul About The Federal Reserve: More Lethal Than Coronavirus