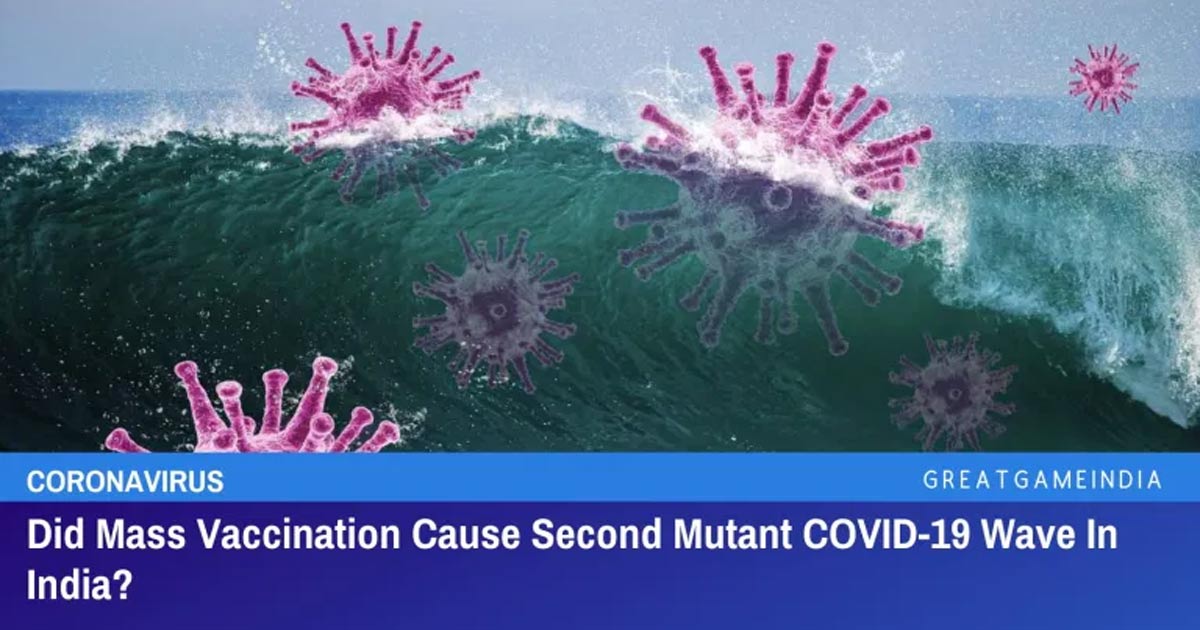 India saw a nearly 750% increase in COVID-19 cases in less than a month. Was this spike logical? Did the state or the city of Mumbai do something different to invite this sudden surge? The next stop for this mutant was Delhi, the national capital. Is this new double mutant very particular and choosy on where it strikes? It does appear it is; otherwise, why should it jump from Mumbai to Delhi and then Bengaluru bypassing many other states and cities en route? Did the mass vaccination drive in these metro cities cause the second COVID-19 wave in India? Or is there something else?

India is hit by the new double mutant virus christened as the ‘Indian Double Mutant’. Where did this new mutant begin its attack on the Indian nation – in the state of Maharashtra, but to be more precise it was in Mumbai, the financial capital of the nation.

Let us look at how we arrived here with respect to the growth in terms of cumulative numbers as provided by Saroj Chadha.

Was this spike logical? Did the state or the city of Mumbai do something different to invite this sudden surge?

The restrictions that were in force were being relaxed in a graded manner over many months. The state did not do anything drastic or different that led to this rise in a number of cases.

In no time, this sudden rise was being attributed to a new double mutant that was spreading faster than any earlier avatar of the coronavirus.

Is this new double mutant very particular and choosy on where it strikes? It does appear it is; otherwise, why should it jump from Mumbai to Delhi and then Bengaluru bypassing many other states and cities en route?

Does this not suggest a pattern where the new mutant first strikes the nation’s financial capital, then the political capital, and next to the soft power capital?

The only thing different that these capitals of India did differently was mass vaccination.

Look at this below chart by the Indian Ministry of Health and Family Welfare (data to 13th May). The chart clearly shows how the COVID-19 vaccination drive is followed closely by the increase in cases.

The question of how closely the wave of infections was following the mass vaccination drive has been irritating many, including Prof. Shamika Ravi, the former member of the Prime Minister’s Economic Advisory Council.

This has been intriguing me for some time. The second wave of infections in India seems to be closely following the vaccination drive – with a short time lag. Has this been the experience elsewhere?
Scientist friends: pls share literature, data that can explain these trends. pic.twitter.com/2fC4RWbI38

Meanwhile, scientists are coming forward warning that the increasing and excessive use of plasma and Remdesivir for treatment is helping the Covid virus to mutate.

Dr. Raman Gangakhedkar, the ex-ICMR scientist said during Covid briefings that if India does not follow evidence-based treatment, it can soon become the breeding ground for many variants of Coronavirus.

One of the side-effects which are being observed is Black Fungus. COVID-19 recovered patients are suffering from post-viral symptoms of Mucormycosis (MM) also known as Black Fungus which is making them blind.

Health experts say the Black Fungus is caused by the use of steroids during Covid-19 infection.

Moreover, it was revealed recently during the Texas Senate Committee hearing that COVID-19 vaccine trials in animals were stopped because they kept dying.

As reported by GreatGameIndia, more than 100 patients have died after taking the first or even the second shot of the COVID-19 vaccine in one a single hospital in India.

This was the case of a single hospital in India. Even the news of these cases came out because it was reported by a regional newspaper. No national mainstream media has dared to touch the story.

There is no mechanism to report adverse effects reactions from vaccines in India. Even if it is being tracked, the data is kept secret.

A petition has been filed in the Supreme Court of India seeking public disclosure of the secret vaccine clinical trials data and post-vaccination adverse events data, as is required by international medical norms.

However, there is another aspect to this theory. Mass vaccinations were carried out in other countries as well. Why then, no deadly mutant as was observed in India was not seen in those countries?

As Saroj Chadha puts it:

The new mutant has conveniently not hit any of India’s neighbors like Pakistan, Bangladesh, or Sri Lanka, part of the Indian sub-continent. The story is the same for other South Eastern and Middle East nations. USA and Brazil, the nations that held the top two positions in a number of daily cases for many months, have not reported any mutants worth their salt.

(Even,) China where the coronavirus originated, has no mutants to report for almost a year and a half. But India, which seemed to have effectively controlled the virus by the end of 2020, suddenly finds a new double mutant in its midst, that is more deadly and spreads much faster.

It is really fascinating to see how an entire nation is led to believe in a wave where a virus was capable to selectively hit the nation where it hurts the most.

Yes, there is a correlation between mass vaccination and the wave of infections and side effects that are being observed. The sooner the Indian government acknowledges this fact the better will be our mitigating response.

However, the fact that such mutations were not observed in other countries which also carried out mass vaccination leads to another set of uncomfortable questions.

Were these mutations also engineered in a lab, as was the COVID virus? Were these mutated viruses let loose in selective Indian capital cities by foreign actors? Are there more viruses than one, contrary to what we are led to believe?

Any way you see it, India is in the midst of an active Biological war; and the sooner we realize it, the better we can combat it.