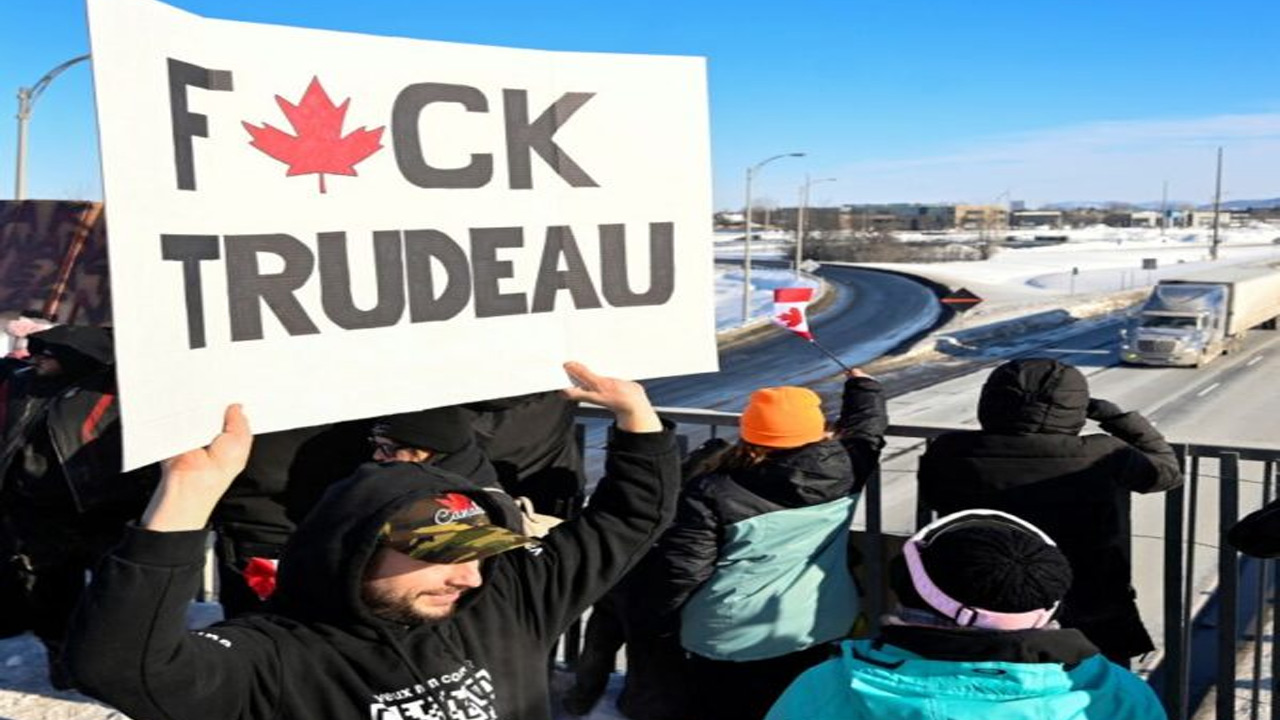 It’s not a good sign that Justin Trudeau has removed himself from the public spotlight at possibly the most pivotal point in his political career.

The Canadian Prime Minister, who recently described the trucker convoy as a “small fringe minority” who hold “unacceptable views” against Covid mantes, may have unwittingly unleashed the greatest challenge ever to his political career.

Like those in the medical profession, long-haul truckers dutifully perform their jobs largely behind the scenes, even during the peak of the Covid pandemic. And just like thousands of nurses and doctors – many of whom were exposed to the virus in the line of duty and probably protected by natural immunity – unvaccinated truckers have found themselves out on the street, or rather, out on the highway.

Dubbed the “Freedom Convoy” that began in Vancouver last week, the 18-wheeler movement is expected to reach Ottawa this weekend as thousands of truckers will clog the capitol in protest. The convoy reveals the level of frustration being felt across the country thanks to Justin Trudeau’s draconian vaccine mandates.

Speaking from Ottawa this afternoon, the PM describes #freedomconvoy2022 participants as a ‘small fringe minority’ expressing ‘unacceptable views’ that don’t represent the views of most Canadians pic.twitter.com/TtYcFE3Izr

Since Jan. 15, unvaccinated truckers entering Canada are required to be tested and quarantined for 15 days; the U.S. mandated similar restrictions on Jan. 22. Naturally, such regulations made their job impossible to perform. Thus, the mandates have removed some 20-25% of the estimated 175,000 cross-border American and Canadian truckers due to noncompliance in both countries. But these sidelined workers are not leaving their jobs without a fight, and it seems that many Canadians support the cause.

While mainstream media and social media have largely been able to control the flow of information that Canadians receive with regards to Covid and the vaccination mandates, the trucker convoy has given the public a chance to really express themselves. Judging by early indications it doesn’t look particularly good for the Trudeau administration.

Telegram, the censorship-free messenger application, is chockfull of videos and photographs of overpasses near Toronto loaded with placard-waving supporters as the convoy grinds its way towards Ottawa to the east. Other platforms showed the local residents of small towns handing out meals to the truckers despite the frigid temperatures.

Undoubtedly the most influential advocate of the truckers’ cause thus far has been Elon Musk, who tweeted a three-word message that certainly did not sit well with Justin Trudeau: “Canadian truckers rule.”

Speaking of Trudeau, the 50-year-old leader of the Labor Party announced just this week that he had been “exposed to Covid-19,” and would therefore be isolating at home for five days. That announcement sparked a small riot on social media, with many suggesting that the Canadian leader had used the excuse of Covid to hopefully avoid the truckers.

Keean Bexte, a journalist with Counter Signal, suggested in a tweet that a new variant of “Coward-19” was detected.

“This is, perhaps, the greatest act of cowardice from a sitting Canadian PM in this nation’s history,” Bexte wrote in an accompanying article. “When Canadians finally take a stand, finally take real action, Trudeau merely waves it away, practically flipping them the bird through a single Tweet, ending it with “please get vaccinated” to rub salt in wounds he’s opened.”

This is the problem when the media and government refuse to permit any sort of formal debate on a serious issue that affects millions of people on so many different levels. Trudeau has given his countrymen just one option, and that is to get the vaccination or essentially become second-class citizens in their own country. Unlike other affected industries, however, truckers have the option of putting their machines to use for a very effective form of protest, and one that promises to cause severe logistical problems as far as transport goes.

Although the Canadian Trucking Alliance and the Ontario Trucking Association (OTA) have both distanced themselves from the movement, saying 90 percent of long-haul truckers are vaccinated, the remaining 10 percent (that is, assuming the figure is accurate as some believe the number of unvaccinated may be as high as 25 percent) leaves anywhere from 20,000 to 50,000 of rigs easily capable of affecting a large swath of the economy, both in the U.S. and Canada.

With tens of thousands of truckers now unemployed, the supply chain crisis, which was already noticeable before the mandates went into effect with over 100 cargo ships docked off the coast of California, unable to unload their shipments, store shelves could become conspicuously less stocked in the days and weeks to come. Already Canadians are displaying disturbing images from their local grocery stores on social media.

Thank you Truckers! Trudeau is attacking personal liberty and threatening everyone's ability to get groceries because of his overreach on vaccine mandates. He is the biggest threat to freedom in Canada.https://t.co/5b5k5ZjuY3

Mike Millian, the president of the Private Motor Truck Council of Canada, said his organization is against vaccine mandates for truckers but is worried about some of the rhetoric he’s seen among the protesters.

“Truck drivers are isolated in their jobs, haven’t been associated to spread, and we can’t afford to damage our supply chain any more than it is,” Millian said in an interview with CBC News. “But this convoy seems to have morphed into a kind of protest against all vaccine and COVID-related shutdowns.”

“We’re seeing signs that are calling our government ‘communists’ and ‘nazis’ and comparing the [situation over vaccine mandates] to the holocaust.”

“Obviously, we can’t support that message,” he said.

Meanwhile, the media in Canada seems to be priming the protest, suggesting that far-right agitators are behind the movement, even warning that Ottawa could experience its “January 6th storming,” a reference to the day when pro-Trump supporters took over the U.S. Capitol in their belief that the 2020 presidential election had been rigged in favor of Joe Biden.

What Justin Trudeau seems unwilling to admit is that Canadians are weary of the debate over vaccine mandates and the divisiveness it has caused throughout society, not to mention the loss of freedoms. For many of these people, the ‘Freedom Convoy’ represents an opportunity for Canadians to latch onto a movement that promotes their own ideas, which includes a strong dislike for the government’s handling of the Covid crisis.

Whether or not this trucker movement will morph into something greater remains to be seen, but it’s not a good sign that Justin Trudeau has removed himself from the public spotlight at possibly the most pivotal point in his political career.

What is motivating the CCP’s Shanghai lockdown?