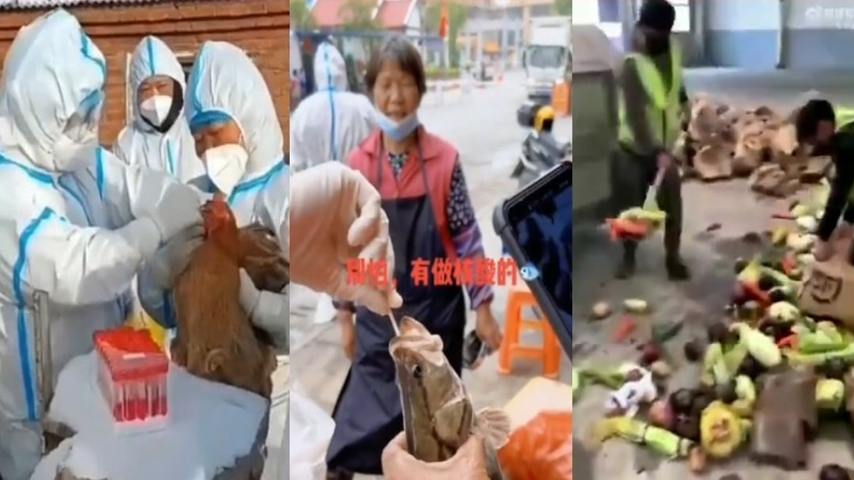 PCR tests are being used on poultry and fish in markets as tons of fresh vegetables are destroyed in Shanghai, China.

While China works hard to suppress what is currently happening in Shanghai and other places in China that have strict lockdowns by deleting social media posts as quickly as possible, some videos and images are being captured and preserved that show how life has become pure hell in Shanghai, with citizens starving to death and being locked down in cages like animals.

Deliberate destruction of food is reportedly happening on a large scale, blaming “COVID” for contaminating the food as they use cotton swab PCR tests to test animals like chickens and fish, while reportedly destroying many tons of fresh produce.

This week fencing appeared overnight in many places to lockdown people in their homes and apartments, and this even made the corporate news cycle this weekend, with the BBC and the Associated Press covering the story.

When you read the corporate news accounts, however, they will give some justification for these actions by reporting on the alleged increase in COVID cases, paving the way for similar measures to happen in the U.S. and other places where maybe the measures will not be quite as harsh as what China is doing, as this is simply a continuation of the massive propaganda media hyping fear over a “virus” that continues to be used to justify medical tyranny and the suspension of all appearances of law and order in the name of the “pandemic.”

Here in the U.S. people like Anthony Fauci and Dr. Oz, who is now aligned with Donald Trump, have publicly stated that the measures China are taking to lockdown their populations are “working” to stop the spread of COVID, which should be a wake-up call to everyone about what we are probably facing in the near future here in the U.S. and around the world.

Here is our video report. This is on our Bitchute Channel, and will also be on our Odysee Channel and Telegram Channel.


Shanghai refuses to collect garbage from homes of “positive cases”

Someone named “Mr. Huang,” who was interviewed by the Epoch Times, said 90 percent of the buildings in his area of Shanghai supposedly now house “virus patients.”

Shanghai appears to have halted many public services throughout the community, though the full extent of this remains unknown.

“We never had any official release, the number of positive cases,” Huang went on to claim. “And the community service staff seem to have disappeared. They totally ignored our existence.”

Calling the city’s helpline or community services leads nowhere now because residents never hear anything back, reports said. So some people are now just trying to help each other out in lieu of government intervention.

“Just now,” Huang claimed, “an old woman was suffering from high fever, and residents from other buildings delivered medication to her at their own risk.”

The SOS letter further claims that Shanghai residents who test “negative” for the Fauci Flu are being instructed to deliver supplies to those who test “positive” without any personal protective gear. So much for stopping the spread (assuming you buy into the official narrative about the COVID spread, which in and of itself is bunk).

Garbage collection has also supposedly become a problem for COVID-positive residents of Shanghai, who are no longer receiving normal pickups and are having to live with waste piling up inside their homes.

“If a household has positive cases, they won’t collect their garbage for days,” Huang said. “They asked what to do, saying, ‘my house stinks,’ but they cannot put garbage outside their doors because they need to be responsible to others.”