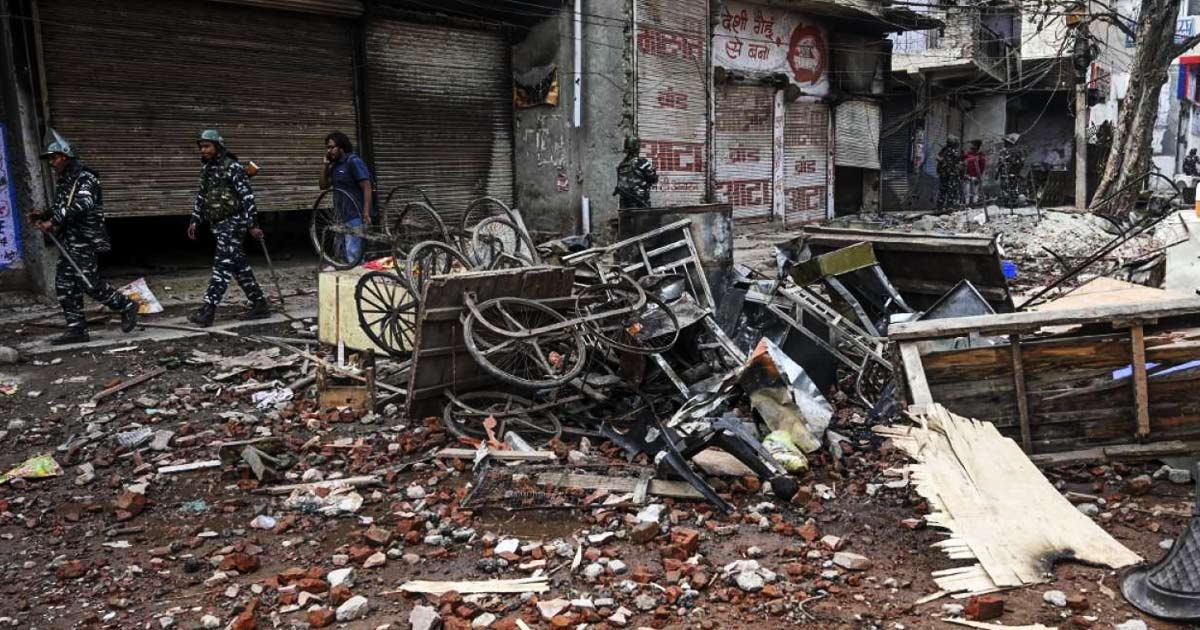 Delhi went through a horrible experience. The national capital burnt while Mr Trump and Prime Minister of India Mr Narendra Modi hosted a lavish dinner party. Delhi Riots started on 24 February, the very same day Mr Trump arrived in India. A coincidence? Around 37 people died and more than 200 were injured and the culprit according to mainstream media is a man named Kapil Mishra, a local politician.

People were peacefully protesting against CAA (Citizenship Amendment Act) when he appeared with his followers. He vented his anger in a fiery speech in which he issued an ultimatum to the police: either clear out the demonstrators, who were blocking a main road, or he and his followers would do it themselves.

Within hours, the worst Hindu-Muslim violence in India in years was exploding. Gangs of Hindus and Muslims fought each other with swords and bats, shops burst into flames, chunks of bricks sailed through the air, and mobs rained blows on cornered men.

But such violence over one fiery speech? For the destruction that the Delhi Riots caused and the amount of damage that was dealt to both sides Hindus and Muslims, it is too irrational to dismiss it as a simple act of provocativeness. Mainstream is making it look like people (both Hindus and Muslims) were ready and that little spark was all that was needed.

The more one reads about this and more insight one gains, it seems like a well organised event that a local politician cannot plan himself but can be made to suit someone else’s plans.

There is no such thing as coincidence in politics. Trump’s arrival marking the starting point of riots and for the time he stayed, riots escalating its peak until he left.

Only after that a tweet came from Mr Modi asking to “maintain peace and brotherhood at all times.” He also added, “Peace and harmony are central to our ethos.”

What did Trump-Modi bromance achieve? Rotten talks of peace and safety, criticising Pakistan and China and some fake trade deal that never happened.

What does Bible says of Peace and Safety:

For when they shall say, Peace and safety; then sudden destruction cometh upon them, as travail upon a woman with child; and they shall not escape.

With similar events happening all over the world. Mainstream media is painting too convenient pictures for the sleeping masses. And for those who don’t know Freemasonry has a very strong hold in India. Many famous Indian leaders were high degree Freemasons.

Modi ‘A Figure of Hate’

Narendra Modi has a long history with riots, with Delhi 1984 and Gujarat 2002. Delhi riots only adds to his beautiful resume. One can also say that Trump’s visit presented a very good opportunity for the BJP government. Since they were already fuming on their loss in state elections which were held on 8 February.

Can Delhi riots be seen as vengeance against Delhi people for the shameful loss of the BJP government. But that would be my personal opinion.

Narendra Modi and his government are hell bent on turning India into a Hindutva nation. Their whole election campaign was centered around this idea but unfortunately for them Delhi people responded to his hate politics with a bang.

Modi’s hatred for the Delhi government is extraordinary! When Mr. Trump landed in Gujarat, Chief Minister of the state greeted him at the Motera stadium. Same happened when Trump visited Taj Mahal in Uttar Pradesh. The Chief Minister of Uttar Pradesh presented him with a portrait of Taj Mahal. But the CM of Delhi was not even allowed to greet Melania Trump when she visited a local school. And yes you guessed it right! Both Gujarat and Uttar Pradesh have BJP as state governments.

Delhi riots were a terrible event that will be remembered for many years to come. Many lives were lost, homes were burnt to the ground and people lost their way of bread.

But the question we will never get an answer to, did Mr Trump know beforehand? I think he did, planning such a massive chaos just on his arrival and dismissing it like a coincidence. And we all know what their motto is ‘Order out of Chaos’.

Saying that all this was pulled out of thin air and the only cause was brimming hatred between Hindus and Muslims would be an insult to the people who lost their lives.

Spain: Ministry of Health Confirms It Has Not Isolated The SARS-CoV-2 Virus and Admits “Tests, By Themselves, Are Not Usually Sufficient to Determine the Disease.”