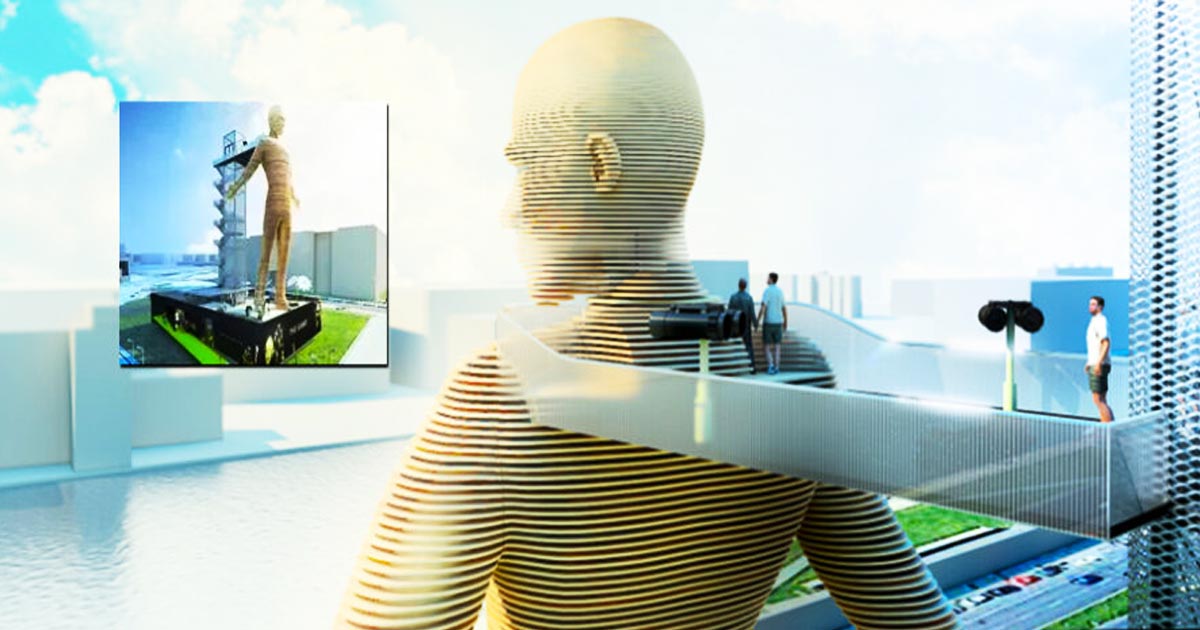 The most exciting visitor attraction concept of the 21st century has been launched. Entitled, The Giant, it features the world’s tallest moving statue. The Giant was conceived by The Giant Company based in Dublin, Ireland.

You can file this one under ‘we told you this was coming, no shock here but, man oh man, what a surprise. For a number of years now, and certainly, over the past 6 months or so, we have been warning you to get ready for the return of the fallen angels and the Genesis 6 giants. Jesus Himself tells us that the time of Jacob’s trouble will see a return of the giants, just as it was in the days of Noah.

Contained in the Matthew 24 prophecy, we see Jesus pointing us back to Genesis chapters 5 and 6, and what do we see there? In Genesis 5, we see people ‘marrying and giving in marriage’  and that produces a man by the name of Enoch. Enoch would become the first person in the Bible ever to be raptured by God from Earth up to Heaven. Enoch is a type of picture of a Christian who goes home to Heaven without ever seeing death. Then in Genesis 6, we see the fallen angels having sex with human women, and producing a race of giants. Giants!!

“And it came to pass, when men began to multiply on the face of the earth, and daughters were born unto them, That the sons of God saw the daughters of men that they were fair; and they took them wives of all which they chose. There were giants in the earth in those days; and also after that, when the sons of God came in unto the daughters of men, and they bare children to them, the same became mighty men which were of old, men of renown. And GOD saw that the wickedness of man was great in the earth, and that every imagination of the thoughts of his heart was only evil continually.” Genesis 6 (KJB)

So it is absolutely perfect that, after the last 15 months of never-ending prophetic fulfillment around the world that we should see a company that wants to bring ‘The Giant’ to every major nation on earth. We are being groomed, we are being prepared for the return of the fallen angels and the return of the giants as Jesus said it would be. The Pretribulation Rapture will remove us before the start of the time of Jacob’s trouble – but – will we see the giants? I am thinking yes we will. Get ready.

FROM BROADWAY WORLD: Supported by Enterprise Ireland and CRBRE, the concept for The Giant includes the multi-story statue mounted on a plinth housing an exhibition. The statue will be embedded with millions of addressable LED pixels giving it the ability to instantly take the form of any person from historical figures such as Albert Einstein or (famous woman Amelia Earhart) to stars of today from Lionel Messi to Beyoncé. Each hour the Giant will transform into each country’s national heroes and celebrities. The Giant’s arms and head can move to a diversity of positions and the images of the men and women appearing on the statue can speak or sing.

More than a visual wonder, visitors to the attraction will explore several fully immersive exhibits that feature state-of-the-art technologies including augmented and virtual reality, robotics, and artificial intelligence. The exhibits are designed to be entertaining, educational, and engaging for all age groups. Another feature of The Giant is the viewing tower where visitors can literally stand on the shoulders of a giant and look out over the city from a dramatic vantage point.

The attraction offers significant economic benefits to cities where it will be located providing a diversity of jobs and attracting local and international tourists and residents who will increase footfall in the vicinity. Besides income from ticket sales, The Giant provides several revenue-producing opportunities including advertising on the spectacular three-dimensional digital statue; Giant selfies where every visitor can be scanned and instantly displayed on the sculpture creating the most awe-inspiring selfie in the world; special events and conferences; and retail shops and restaurants which are situated on the terrace roof garden. Additional revenue options include private events, brand celebrations, and messages for birthdays, anniversaries, and wedding proposals. The Giant is expected to draw approximately 500,000 visitors each year, generating annual revenues of around €12m. Each Giant will cost between €15 – 20m to develop, depending on the location and size of Giant, which is variable.

CLICK TO ORDER YOUR COPY OF THE GENESIS 6 GIANTS AND THE FALLEN ANGELS!

Speaking about the launch of The Giant, Dunning said; “With patents in place, we are excited to unveil our plans! We have already had interest from investors from Europe, Australia, Abu Dhabi, and cities across the US. The beauty of this attraction is that its exhibition can be tailored to individual cities and cultures and the sculpture can be posed in a number of positions to suit the location. International commercial property giant CBRE has partnered with The Giant Company and is engaging with city authorities globally with the goal of establishing 21 Giants in 21 locations in 2021. Niall McEvoy, Senior Development Advisor from the Irish Department of Enterprise said, ‘The Giant is a High Potential Startup project we have supported from when it was at the concept stage. At the core of this innovation is an ambitious team that has a vision for developing landmark attractions in multiple city locations across the globe. We look forward to supporting the next phase of the rollout of this innovation’.

Iconic American attraction company Ripley’s Believe it or Not! Has also shown enthusiasm in the project with President Jim Pattison saying, “The Giant has real potential on so many levels: iconic landmark, attractions, technology, lighting, education and most importantly family fun! The outside will be an artistic canvas that can celebrate any event in the community and inviting every guest to be one of the many beautiful faces of the Giant. Excited to see which world-class city will be the first to take advantage of this Gigantic opportunity!”

A matrix of millions of programmable LED pixels gives The Giant the ability to instantly take the form of any man or woman, celebrity or historical figures #TheGiantStatue pic.twitter.com/ombfT1sQVF

Speaking about securing interest, Florence Stanley, of CBRE, said, “We’re looking for prime locations and we are also open to more off-beat sites that need to drive footfall. We are very excited to be working on this project sourcing sites in 21 cities around the world. Our immediate priority is securing appropriate locations and from there finding investors who will see the huge benefits of situating this iconic attraction in their city. Franchising the Giant is also an option”

THE GIANT IS PANDEMIC PROOF I.E. EVEN IN TIMES OF LOCKDOWN CUSTOMERS CAN SCAN THEMSELVES USING AN IPAD AND FOR A FEE UPLOAD THEMSELVES TO BECOME A GIANT AND SHARE THEIR GIANT SELFIE ON SOCIAL MEDIA.

Visitors to The Giant will receive a certificate and become part of the Giant Movement, an ongoing online engagement for the public. The Giant will also present new dimensions in gastronomy and shopping. The team will work with leading chefs, artists, and inventors in each location to ensure that the dining and retail experience is imaginative and of the highest level for its customers. The Giant’s movement will lead the charge on promoting sustainable living and climate action along with funding programs for the homeless and other philanthropic endeavors.

THE GIANT COMPANY/ORGANIZATION WORKS IN CONCERT WITH CITIES, EMBASSIES, AND LEADERS ACROSS THE GLOBE.

The Giant Company is a member of IAAPA, the international association of amusement parks and attractions. The Giant is planned for 21 major cities across the globe. While every Giant is bespoke for its city and country, each is also a member of a family that can digitally communicate with other Giants around the world. Global events will engender global communities and these trendsetting events will become a defining social feature of the coming decades.

Inside the ten-thousand square foot exhibition space, visitors will engage with The Giant Exhibition which offers an absorbing journey into the world of giants from the realms of legend and mythology, to a celebration of the extraordinary men and women of the city and country it’s located in; from its inventors, scientists, and artists to leaders, athletes, and game-changers from the past to the present. The Giant visitor attraction can be built as a temporary or permanent structure for cultural and commercial use. All aspects of The Giant conform to the highest standards of ethical business practices and environmentally sustainable and health-conscious design, construction and operation. READ MORE

WEF Wants to Track Our Children with RFID Tags