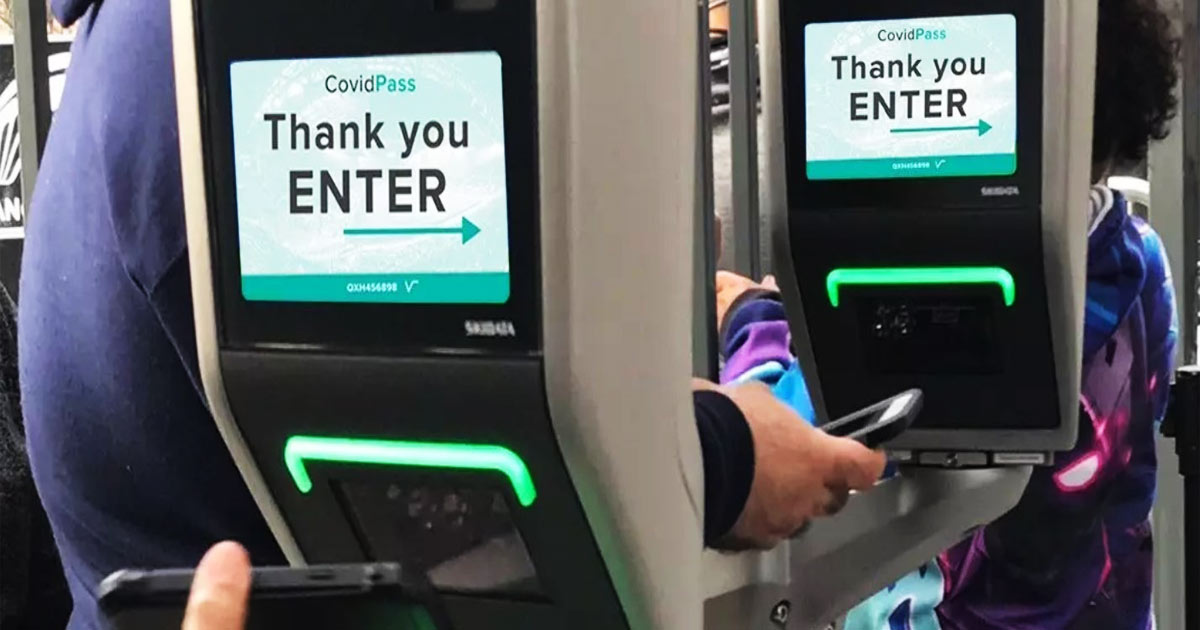 After I have extensively documented the numerous ‘Immunity Passport’ schemes (including ID0202, COVI-PASS, and many more) that were in the works in my long series on this whole Plandemic agenda to vaccinate/chip us all, it seems that the powers-that-really-shouldn’t-be technocrats are at it again.

This time, the flavor of the day is: CovidPass. You know, typical run-of-the-mill ‘Solution’ in the Problem-Reaction-Solution technique they love to employ.

It is already being touted as the panacea that will magically put an end to all the Covid-19 disruptions that have [supposedly] ruined our entire way of life and removed all that is “normal”.

We all know that this has been a highly-coordinated plan to further entrap and enslave us all; the ultimate goal being total control of our lives in terms of movement, health, and financial freedom.

So, what is CovidPass and what is the WEF (World Economic Forum) scheming?

Before looking at this development in their own words, we first need to look at who exactly makes up the WEF.

If you don’t know who the WEF (World Economic Forum) are, you better become familiar with them, for they are comprised of some of the most powerful players that shape financial, political, and societal norms that affect you.

In a nutshell, they are the “power elite” that work trough various means to implement their plans for greater control. The best term that has been used to describe this group is: technocrats.

They wish to impose a worldwide system of technocracy in which everything is controlled by systems that they have devised in order to control and enslave us all.

While people fear socialism, communism, or fascism coming to their shores, the real, highly underestimated, threat is that of a technocracy which is unmistakably supported by Big Tech outfits like Google, Facebook, Twitter, and YouTube as well as the International Banking Cabal.

I won’t go into a lengthy description of what a technocracy entails and how the mindset of technocrats work, but if you want to learn more about this system look no further than the leading expert on the matter, namely Patrick Wood. The following two sources are also excellent ways to brush up on the threat:

With that important backdrop out of the way, let’s return to the subject at hand, the CovidPass.

Here are a few highlights directly from the WEF’s own report entitled Could this COVID-19 ‘health passport’ be the future of travel and events? (July 2020) starting with their selling points [emphasis added]:

Thousands of summer holidays are now up in the air, following a series of COVID-19 flare-ups around the world, with trips cancelled and travellers (sic) forced to quarantine when they return home.

Once again, typical Problem-Solution they present as per the Problem-Reaction-Solution manifesto.

Now, a new health passport app promises to restore confidence to the travel industry, which has been badly hit by the pandemic. Global tourism shrank by 97% in April, according to the United Nations World Tourism Organization.

A possible solution
CovidPass is the brainchild of one of the World Economic Forum’s Young Global Leaders, Mustapha Mokass. It also involves other YGLs across 5 continents, including Muna AbuSulayman and Peggy Liu. CovidPass uses blockchain technology to store encrypted data from individual blood tests, allowing users to prove that they have tested negative for COVID-19.

I’ve warned about this before. They wish to store your personal health and medical information on blockchain on a centralized database. And they wish to make it mandatory, for without it you won’t be able to travel internationally. That is the plan these technocrats have in mind.

Meanwhile, governments are faced with a variety of different testing regimes to validate the health of travellers. “This isn’t enough to reassure tourists or health authorities”, says Mokass.

They are also [conveniently] positioning their sought scheme by pointing to inefficient and uncoordinated testing regimes employed by various governments; all with the intent of coordinating/standardizing these into one seamless system. This is the form of mind control ploys they use on useful idiot politicians who become all to pliant to their demands. They have been using such tactics for decades to great effect (and detriment to populations).

Mokass hopes his app, which is launching in September, will become a standardized solution for airlines, airports and border agencies, and eliminate quarantine for healthy travellers. CovidPass could also allow hotels, cinemas, theatres, sporting and concert venues to reopen safely.

Again, I warned about how they would use such kinds of ‘Immunity Passports’ to force us all to submit, for if we don’t we won’t be able to travel, book hotels, go to sporting events, the cinema, etc.

I think what these technocratic idiots don’t realize is that the masses will not stand for this. But their arrogance and hubris certainly won’t stop them from trying. They do have this ‘God complex’ and think they are the masters of the universe and are the only ones who can dictate viable solutions to complex problems.

The WEF, or Davos crowd as they are also commonly referred to, also came out with a related article entitled EU states agree a tech spec for national coronavirus apps to work across borders last June. Here are a few key highlights [emphasis added]:

Two key points from above. First, the European Union has agreed on a “framework” on cross-border tracing apps. That in itself is quite scary. Next, their system will provide a “Federation Gateway Service” which basically means a centralized database of information about European citizens’ health and movement information. Once again, this is an egregious and highly unethical (most likely illegal) undertaking they are scheming.

A number of European countries have launched contacts tracing apps at this point, with the aim of leveraging smartphone technologies in the fight against COVID-19, but none of these apps can yet work across national borders.

Last month, EU Member States agreed to a set of interoperability guidelines (PDF file) for tracing apps. Now they’ve settled on a technical spec for achieving cross-border working of apps. The approach has been detailed in a specification document (PDF file) published by the eHealth Network.

I won’t go through these highly technocratic documents filled with technical jargon that is used to disguise the true malicious intent of their stated purpose. But rather, just mention that it should serve as a warning about how these people implement what they want for their technocratic system of control.

Will the airline industry fall in-line with the WEF?

The real question is whether the airline regulators and associations will go along with these schemes.

A couple of months ago I wrote a post entitled International Air Travel to require COVID-19 Test or Vaccine | Immunity Passports which also served as a stark warning about how airlines could come to require either stringent Covid-19 testing and/or Immunity Passports as a strict requirement for air travel. While the matter had yet to be determined, there have been some updates.

Here are some recent news bites from two of the industry players, namely the IATA (International Air Transport Association) and CAPA (Centre for Aviation, part of the Aviation Week Network) stated to be “one of the world’s most trusted sources of market intelligence for the aviation and travel industry.”

Despite repeated calls for a science-based, harmonised and coordinated approach to new restrictions – differing national approaches have emerged.

Moreover, the imposition of such restrictions fails to take into account other options governments have to protect their citizens, such as effective track-and-trace systems.

The aviation associations assert that renewed efforts must be urgently put into:
– Ensuring the interoperabiliy of contact tracing apps, as none of the existing apps are interoperable;

We can see that the IATA is pleading to European governments to “ensure the interoperability of contact tracing apps” which is exactly what the WEF technocrats want. (Maybe I should start calling them technorats instead)

Though it’s hard to prove, It wouldn’t surprise me at all if the WEF has used its power and might to strong-arm the IATA into playing along with their charade.

The CAPA further notes in their May 7, 2020 release entitled Providing confidence and affordability:

When proven and available at scale, testing for COVID-19 or immunity passports could also be included as temporary biosecurity measures.

Here, CAPA is re-emphasizing the IATA’s sentiment on immunity passports. Though they do state that this could be a “temporary” measure, we know post-9/11 that these kind of airport measures seldom get pulled-back once they are implemented.

The long-term solutions for COVID-19 depend on medical science. “We need a vaccine, an immunity passport or an effective COVID-19 test that can be administered at scale,” de Juniac continued.

Here, they are quoting Alexandre de Juniac who is the head of the IATA.

The power that de Juniac holds is key. As international travelers, we are kind of at his mercy. If he decides to impose a Covid-19 vaccine or Immunity Passport, we are fucked (and he risks further destroying this entire industry that is already enormously affected and fragile); if it is only an “effective COVID-19 test” then it may be better, but who knows how often this test will be required. Already many countries such as China a requiring a valid Covid-19 test submitted within 24-hours as an entry requirement.

One way or the other, it’s not looking too smooth on the horizon.

We must keep monitoring the situation, especially as it is developing in Europe and the UK.

The WEF is already making the focus of their 2021 World Economic Forum at Davos one of The Great Reset; in their own words:

There is an urgent need for global stakeholders to cooperate in simultaneously managing the direct consequences of the COVID-19 crisis. To improve the state of the world, the World Economic Forum is starting The Great Reset initiative.

And we know that they are planning and wish to release a new global digital currency that will be tied to this Covid-19 nonsense which will further entrap and enslave us.

So, let us all keep an eagle eye on their moves and push back at the local and country level. We outnumber these technocrat parasites and can stop them if we work together.