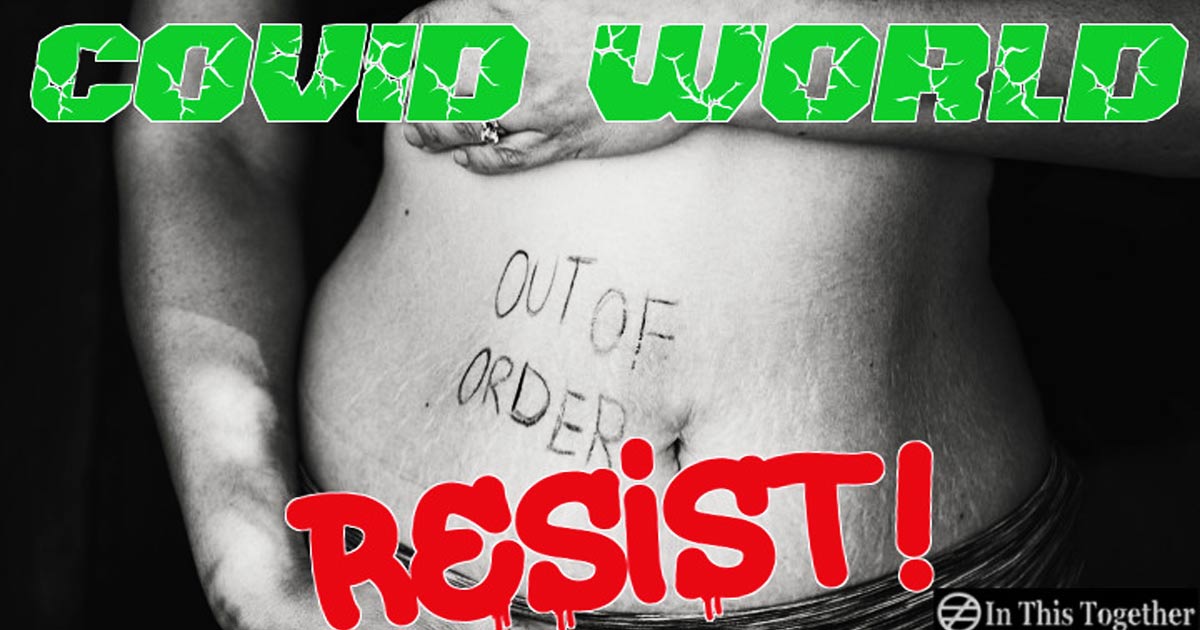 COVID 19 is being used to create a global fascist dictatorship. From New Zealand to the the U.S, so called western democracies have adopted and developed the Chinese model of technocracy to create a single biosecurity State. This globalist corporate State is to be centrally controlled and administered by a distant global governance cartel of appointed bureaucrats. Tasked only to serve the interests of a tiny, disproportionately wealthy group we can call the parasite class.

Every aspect of your life will be monitored and controlled, as we move towards the ultimate surveillance State. Your ability to work, to socialise, to travel, conduct business, access public services and to purchase essential goods and services will be dictated to you, and restricted, by the State, based upon your biosecurity or immunity status.

This transformation process is well underway. You are no longer a human being, you are a biosecurity risk. As such you may be removed to a military controlled quarantine camp as and when the State sees fit. Detention without trial will be the norm. All protest will be outlawed unless the protest suits the agenda of the parasite class.

Your children will no longer be your own. They will belong to the State. Parental consent for medical procedures will be presumed or, in the case of mandatory procedures, not required. Once the biosecurity State is firmly established consent will be a distant memory.

We have a diminishing window of opportunity to stop this global fascist dictatorship. Violent protest will not work. Not only are they morally indefensible, they are tactically naive.

Violence is the language of the oppressor. The global State holds total dominion over instigation of the use of force. To crack down, in response to a violent uprising, is the fervent hope of the oppressor. It allows the State to exercise more, not less, authoritarian control.

In reality, to stop it, all we need to do is refuse, en masse, to comply. We must do this with our eyes open. It won’t be easy and many of us will face harsh punishment from a desperate tyrant. However, if we don’t stand up now, we are condemning future generations to unimaginable levels of slavery and misery.

In order to foist this upon us, the apparatus behind it has invested billions in propaganda. The fascist technocracy, presently being being constructed at an alarming pace, requires our cooperation. Without it, the biosecurity dictatorship cannot gain its desired authority.

Our representative democratic systems are not what our forebears gave everything to build. The parasite class have hollowed them out, replacing the organs of State with their own, leaving only the shell as a chimera to maintain our delusions and keep us believing that we have a semblance of control.

It is a fools errand to attempt to use their system to win our freedom. It is designed to control us. Appeals to their courts will never deliver justice to us. Temporary, small victories will always be overturned. Nor can we vote harder expecting yet another of their puppets to save us.

The purpose of the representative democratic apparition is to centralise all global power in the hands of the parasite class. This course is inexorable and, while we persist in our electoral folly, we will not alter it.

We must build something new to replace it. The obvious solution is the decentralisation of all power to the individual. We must construct a voluntary society.

Without us, without our obedience, the parasite class is currently nothing but a group of ineffectual, wannabe plutocrats, sat on piles of paper, created from nothing and worth nothing. If we don’t obey, there are no rulers.

Should we refuse to use their monetary system, their usury will be fruitless; if we decide not to pay their taxes, we cut will off their economic exploitation and if we never vote for their bureaucrats we won’t consent to their nominated, elected aristocracy.

We are the meek, we are the receivers of all knowledge and all wisdom. We possess all the technology we need and we are the experts. It is our world, leased from our future generations, not theirs. Without us the parasite class are utterly incapable of controlling anyone or anything.

We must create, not destroy. We must liberate science, technology, art and knowledge itself from their occult control. We must build alternative decentralised systems, enabling humanity to live as a coexistence of free, sovereign beings. We must focus upon self sufficiency, we must support each other, turn our backs on the control systems of the parasitic State and build our own autonomous communities.

We must refuse to comply with any and all attempts to centralise power. We can do this by rejecting, outright, the concept of authority.

No one ever has any right to tell anyone else what to do. But nor does anyone ever have the right to cause any harm or loss to another human being. We can live in harmony because we are capable of respecting each other equally, without reservation. We know this.

Not a single human being on this Earth has the right to order any other to obey their authority. None of us possess this power. Therefore, this power can never be derived from us. We do not have it to give. The State’s claim of authority, gleaned from their electoral anointment ceremony, is a charade. Their authority does not exist in reality, only in our imaginations.

We don’t need their systems of authority to live in relative peace and harmony and we never have. Spontaneous order is all around us. We already live the overwhelming majority of our lives free from State control and without the need for anyone to impose any rulers upon us.

With a few exceptions, no State compels the farmer to grow crops, no State coerces laborers to pick the harvest or engineers to design and operate packing plants and no State forces anyone to transport the produce to market nor any consumer to buy it.

This system isn’t controlled by any single authority. It is an intricate, often global, network of free individuals, each acting in their own best interests, creating a harmonious social order way beyond the operational control of any State. The State has no part in this social order of immeasurable complexity.

This ordered social construct, bringing food to the family table, is entirely voluntary. Our society is built from millions of such systems and trillions of voluntary actions and exchanges that happen every day. The voluntary society already exists. All we need do is recognise it, and then seize it. The State is, and always has been, entirely unnecessary. It is a hindrance, not a utility.

What benefit does the State and its regulation bring to our food supply chains? It claims to protect it. Protect for whom?

It removes the free market to protect the profits of multinational corporations. It imposes taxes, raising everyone’s costs, to pay for its wars of neocolonialist exploitation. It forces wages down, it cuts the margins for everyone from growers to retailers, pushing some into poverty to be preyed upon by the same corporate State.

Its food standard regulations, supposedly designed to keep us safe, effectively reduce food quality, creates massive waste, reduces nutrition, causes more sickness and lengthens the queues at the pharmacy. Again for the benefit of the parasite class and their pharmaceutical corporations.

In a truly voluntary, free market what would a supplier gain from providing low quality, expensive produce to consumers? They would quickly go out of business.

Only State regulations can possibly facilitate lowering quality, while raising prices, without anyone in the supply chain, other than the oligarchs at the top, profiting from it. Corporate profit is the bottom line and the State’s sole purpose is to protect it.

Yet, somehow, we remain convinced that society could not possibly order itself spontaneously, without the forced coercion of the State. Despite the fact that, in great measure, it already does. We neither lack the ability nor the knowledge to build a voluntary society. We lack the confidence, because this pernicious system is purpose built to rob us of it.

We are taught, practically from birth, that respecting authority is a virtue. To obey is to be good, disobedience is punished. What could we be if instead we taught our children to think critically, that all of us have equal, inalienable rights, never to cause harm or loss and to take responsibility for themselves because there is no claimed protection from any authority?

Unfortunately, once we enter the education system the doctrine of authority is vigorously reinforced through perpetual repetition and the systemic application of reward and punishment. We are taught what we are allowed to know. This prepares us to be productive workers and responsible members of the State.

We are then permitted to work until we are no longer productive, with every last ounce of profit milked from us, as we shuffle off to our graves on pharmaceutical life support, before the State swoops in to hoover up the remnants of our lives.

This is not done for our benefit. We are programmed to believe in the farcical notion of a benevolent State. A State which exclusively serves the parasite class and one in which our lives are the real commodity.

COVID 19 is not a high impact infectious disease, it has low mortality rates and is absolutely comparable to influenza. It isn’t even clear that is can be identified as a disease at all. Sadly, it seems the vast majority of us are so adapted to our authoritarian environment that we are incapable of ever questioning anything we are told by our superiors.

COVID 19 is nothing more than a casus belli for the Third World War. As the representatives of the State openly admit, that war is a hybrid war. Just as there is no such thing as a healthy human being, nor is there any distinction between war and peace.

All is war and we are the enemy. The military objective is to grind us into docile and compliant slaves, serving the new normal State.

We must face reality. In the new normal, driven by the “Fourth Industrial Revolution,” our labour is no longer required. We are destined only to consume, and that consumption is to be ruthlessly controlled. As are we.

There is no black and no white, no right wing nor any leftists, there is no gay and no straight, no Republicans nor Democrats, no Conservatives nor Labour supporters. These are just some of the divisions forced upon us by the parasite class, and its compliant lapdog the mainstream media, to keep us divided and to stop us realising the truth.

We are in this together. All of us. No matter where we live or what we believe. We are all part of a single, inviolable truth.

Call it God, Allah, Yahweh, the Divine Spirit, the Universe, Mother Earth or Natural Law, there is one truth and we all understand it. Cause no harm, cause no loss, take responsibility for our actions and treat all with compassion and respect.

We are not merely a random cluster of atoms. We are sovereign spiritual beings. We have purpose and every life has inestimable value. We stand together or divided we fall.

You have a choice. Choose wisely.