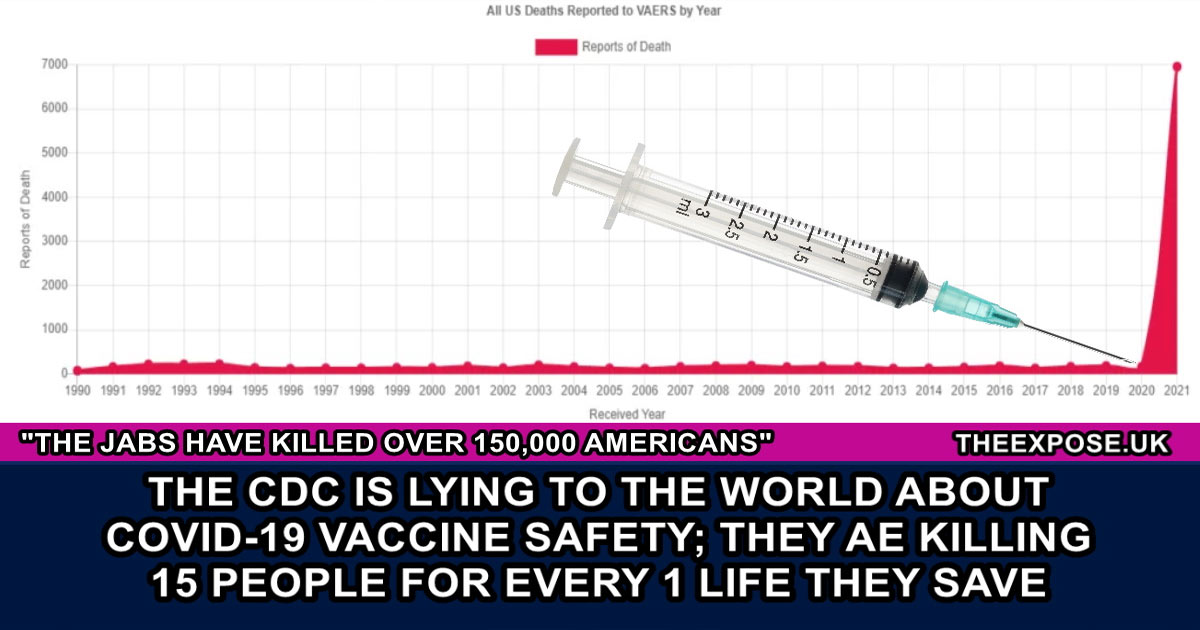 The CDC and the FDA claim that we can safely ignore the huge spike in event rates reported to the VAERS system this year (this is the official adverse event reporting system relied on by the FDA and CDC to spot safety signals). In their view, there is “nothing to see” in the death chart below. They claim that the propensity to report (PTR) is much higher this year and that all the events (with the exception of a few) are all simply reporting background events that were not caused by the Covid-19 vaccines.

There’s just one tiny little problem with that explanation: there is a CDC paper that proves that they are lying. Big time.

I will show below that even if we believed everything they said, it can’t explain all the deaths and severe adverse events. The data simply doesn’t fit their hypothesis. At all.

The reality is the vaccines are extremely dangerous, they kill more than they save for every age range (it’s worse the younger you are), and they should be halted immediately, not green-lighted like the FDA committee just did. All vaccine mandates should be rescinded.

In a nutshell, there is a paper written by five CDC authors, The reporting sensitivity of the Vaccine Adverse Event Reporting System (VAERS) for anaphylaxis and for Guillain-Barré syndrome, that was published a year ago in the peer-reviewed scientific literature.

The paper claims that serious adverse events in the past have been under-reported by at most a factor of 8.3 (known as the under-reporting factor (URF)).

This means that in the best possible scenario, where there is full reporting (i.e., where the URF=1 and the PTR, defined as the avg URF/current URF, is 8.3), a reporting rate of serious adverse events that are 8.3X higher than the previous reporting rate for that symptom could be safely ignored as simply due to a higher propensity to report the naturally occurring rate of background events.

While theoretically, you could have a URF of <1, this is unlikely since the HHS verifies all records before they are put in the database and eliminates duplicates. There are mistakes that happen but they are minor, e..g, we know of 2 gamed records out of the 1.6M VAERS reports. So the minimum URF would be 1 and it would be nearly impossible to achieve from a practical standpoint.

Here’s the problem. This year, with the COVID vaccines, there are a huge number of serious adverse events that are reported at a rate that is more than 8.3X higher than previous years. In fact, nearly every serious event I investigated was elevated from previous years by significantly more than this. I documented this in an important video on VAERS’ serious adverse event reports that I hope everyone will watch.

Unfortunately, none of the people at the FDA, CDC, or on their respective outside committees has ever watched that video. If they did, they would immediately realize the enormous mistakes that have been made and I’m sure take corrective action.

But cognitive dissonance prevents them from watching the video. I think the only way to force them to watch the video would be to physically strap them in a chair and put clamps on their eyes as was done in the movie “A Clockwork Orange.”

How do you explain the rates of pulmonary embolism?

The most stunning serious adverse event I found was a pulmonary embolism (PE).

As I show in the video, the average annual number of reports of PE per year in VAERS for all vaccines was 1.4. So we’d expect to see at most 11.6 PE events this year according to the belief system of the FDA and CDC. Well, one tiny little problem: with the COVID vaccines, there were 1,131 reports, nearly a 100-fold increase over the “best case” scenario. Please watch the video on VAERS’ serious adverse event reports to see this for yourself.

Also, for those suffering from “cognitive dissonance syndrome” (this is a common affliction of people who think the vaccines are safe), the increase in reports isn’t due to increased rates of vaccination either as we explain in this paper which shows historical vaccination rates among various age groups.

In other words, even if you totally buy the bullshit argument of the FDA and CDC (which they never justified with analysis or data) that the URF=1 this year, it still means that 99% of the reports of pulmonary embolism (PE) are unexplainable. They must be caused by “something” and that something has to be very big and it has to be correlated with the administration of the vaccine because the PE reporting rate was correlated with the vaccine administration.

If these PE events weren’t caused by the vaccine, then what caused them?

But since the mainstream media and fact-checkers are completely tone-deaf to safety reports, they never ask the question. They never will. It would explode the whole false narrative.

Furthermore, if we use the same methodology as used by the CDC in their paper to determine the actual underreporting factor for this year, but we use a much more accurate reference, we find that the best estimate for the minimum URF is 41. For less serious events you’d use a higher number since healthcare workers and consumers are far less likely to report less serious events. So using 41 is always “safe” in that it will not overestimate any event.

This means that we’ve killed well over 150,000 Americans so far, and all of those deaths had to be caused by the vaccine because there is simply no other explanation that fits all the facts. See this paper for the details. The paper also details 7 other ways that the number was validated and none of those methods used the VAERS data at all. This makes it impossible for anyone to credibly attack the analysis. Nobody wants to debate us on this.

And Pfizer’s own Phase 3 study showed that we save only 1 COVID death for every 22,000 people we vaccinate (you have to see Table S4 in the supplement to learn that 2 people died from COVID who were unvaccinated and 1 person died from COVID who got the vaccine, so a net savings of 1 life).

We have fully vaccinated almost 220M Americans which means we may save an estimated 10,000 lives from COVID per the Pfizer study which is the most definitive data we have (since “real scientists” ONLY trust the data in the double-blind randomized controlled trials).

Yet the VAERS data shows we killed over 150,000 Americans from the vaccine to achieve that goal.

In other words, we killed 15 people for every COVID life we might save.

But it’s worse than that because the Pfizer study was done pre-Delta. The Pfizer vaccine was developed for the Alpha variant and is less effective against Delta. So our numbers are even more extreme.

This means of course that the FDA, CDC, and their outside committees are all incompetent in their ability to spot safety signals. They couldn’t even spot the death safety signal. It also means that the vaccine mandates are immoral and unethical.

An inconvenient truth: vaccine-induced myocarditis is neither rare nor mild

When we apply the proper URF to the myocarditis data, we find that myocarditis goes from a “rare” event to a common event.

Using data from the CDC and applying the correct URF, for 16-year-old boys, the rate of myocarditis is 1 in 317 as we can see from this slide from our All you need to know deck. That’s not rare. That’s a train wreck.

Also, as far as the myocarditis being “mild” that’s bullshit too. According to the cardiologists I talked to such as Peter McCullough, there is no such thing as mild myocarditis. Anytime you have an event that puts a teenager in the hospital, that’s problematic. In fact, as we show in All you need to know, troponin levels can rise to extreme levels and stay elevated for months. Troponin is a marker of heart damage. Unlike a heart attack, the levels are much higher and they stay elevated for much longer. The damage that is done is usually permanent and it may lead to loss of life within 5 years. Of course, nobody knows the death rate in 5 years. We’ll find out in 5 years. Our kids are enrolled in the clinical trial of this by getting vaccinated, but we don’t notify the parents of this. And the kids are clueless because the doctors tell them it is safe. They believe the doctors. The doctors believe the CDC. And the CDC was lying. And now the CDC simply doesn’t want to talk to us about it. I get that.

There are thousands of elevated events

It’s not just a few symptoms that are elevated. There are thousands of them. If they don’t kill you, you can be disabled for life, even after you use the right drugs to rid yourself of the damaging effects of the vaccines.

Here are the pills are taken daily by a friend of mine (a former top nurse at one of the top medical schools in the US) who has been injured for life from the vaccine and cannot work (she’s a single mom).

Medication and supplements are taken before vaccine injury: 0

The compensation received from the US government for her injuries: 0

This is embarrassing for everyone: the CDC, FDA, Congress, mainstream media, and the medical community. This is why nobody will debate me and my team of experts in an open debate. Because nobody wants to face the fact that they were wrong.

The public wants a debate. It’s overwhelming. I’ve never seen such a lopsided survey result in my life:

But nobody supporting the false narrative will debate us. These people are not accountable to public opinion.