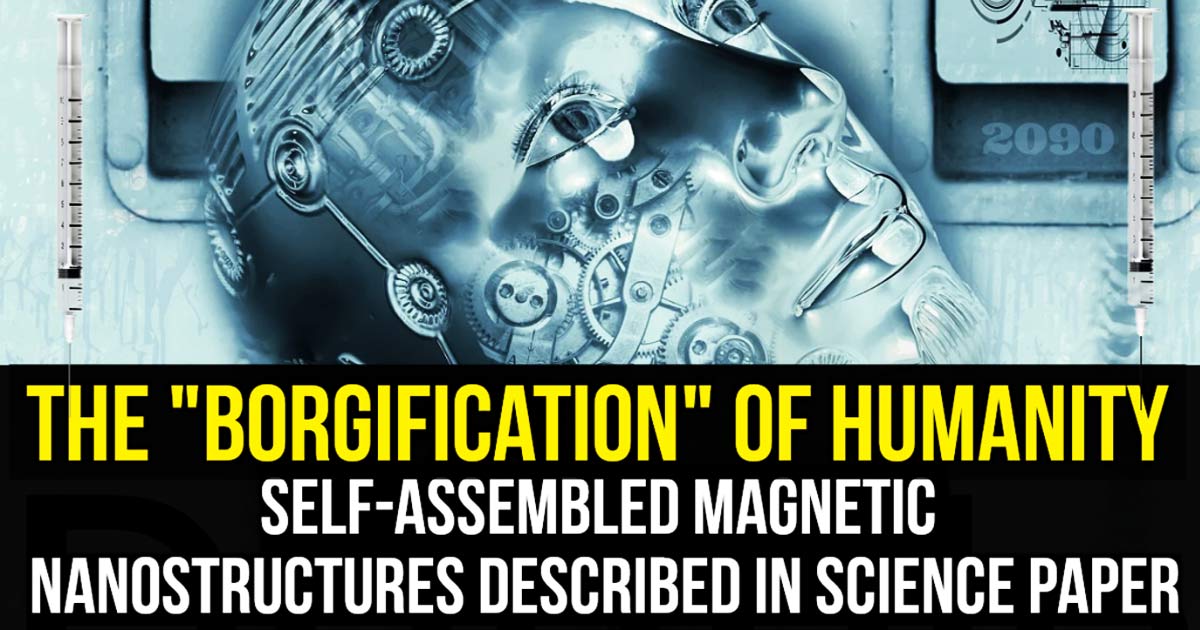 The average person living today has little idea how far the development of self-assembling nanotech biocircuits has progressed. So-called “fact-checkers” (professional propagandists and liars) deliberately mislead people into thinking there’s no such thing as a self-assembling graphene-based biocircuitry system that could be feasibly injected into people and called a “vaccine,” but the published scientific literature lays out a comprehensive, well-documented body of research that shows this technology is quite real… and has been tested in biological systems for at least two decades.

A “self-assembling” system means that a person is injected with instructions that set into motion a process where a structure is assembled inside the body, using resources available in the blood (such as iron and oxygen atoms). In effect, nanotech self-assembly means that a microchip doesn’t need to be “injected” into someone since the circuitry can be assembled in vivo after injection.

“A myriad of magnetic nanosystems can be created by using self-assembly as a synthetic tool,” says the abstract of a study published in January of this year. Published in the journal Aggregate Open Access, it’s entitled: Self-assembled magnetic nanomaterials: Versatile theranostics nanoplatforms for cancer.

The paper focuses on, “Self-assembled magnetic nanomaterials (MNMs)” and details their use in biomedicine, writing: 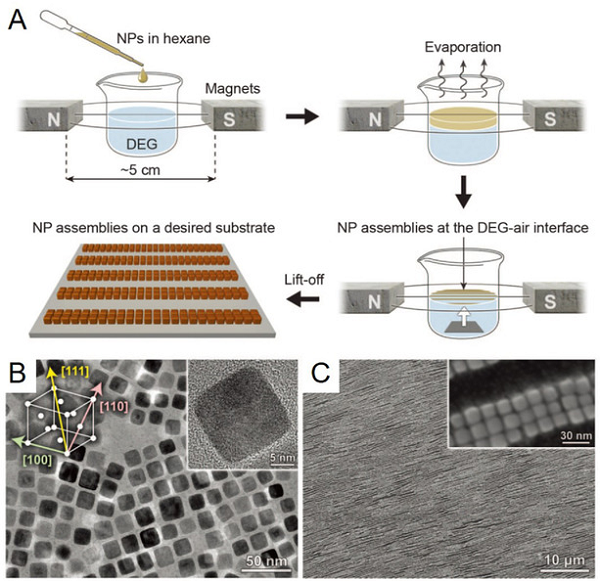 The study makes reference to the self-assembly of iron oxide nanoparticles, which can exhibit magnetic properties in certain configurations. These are known as SPIONs (Super Paramagnetic Iron Oxide Nanoparticles).

This approach could be used for the assembling process of other MNPs such as Ni NPs, Co NPs, and Fe3O4 NPs. Such a self-assembly strategy might play an important role in the construction of DDSs. (Drug Delivery Systems)

…In addition, the magnetic field also shows their great ability in NPs’ assembly. Magnetic field-induced self-assembly simplifies the operation steps, but requires accurate magnetic field control equipment to achieve, which increases the dependence on the equipment.

What’s clear from this analysis is that external magnetic fields can direct the self-assembly of nanostructures which can function as cybernetic biocircuity interface systems in the human body.

The self-assembly of iron oxide nanowires

Another study published in 2004 in the journal Advanced Materials shows some of the early research in the self-assembly of iron oxide nanowires using external magnetic fields.

Single-crystalline nanowires of Fe3O4 hydrothermally synthesized under a magnetic field are reported. The square and hexagonal crystals formed in zero applied field are shown to give way to nanowires as the magnetic field is increased.

What researchers have discovered since then is that the required energy to initiate self-assembly is surprisingly small. From the first paper, above:

The interaction between the induced magnetic dipole and the external field was very weak, which was on the order of van der Waals force. The past decades have witnessed the progress of the self-assembly of MNMs under magnetic fields.

What this means, essentially, is that relatively weak broadcast energies can induce the growth of nanowires inside the human body, given the right substances being injected into the body to start with. The van der Waals force describes a very weak intermolecular bonding phenomenon that’s well known in mainstream science.

Here’s an electronic microscopy image of some of the nanoparticle lattices created through external magnetic fields: 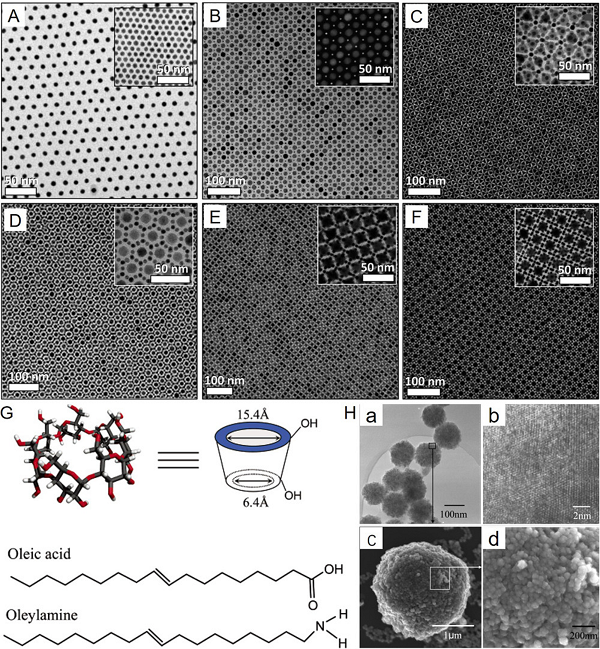 The same study also mentions “DNA hydrogels,” explaining that they are “magnetically controllable.” From the study: (emphasis added)

DNA is considered a core genetic biological molecule in living systems. Although DNA molecules are composed of simple units, different deoxynucleotide chains, and flexible conformations can be achieved through precise design and organization, which can be programmed. In other words, this is the nature of DNA self-assembly. For example, Ma et al. introduced DNA-modified MNPs, Y-scaffolds, and DNA linkers into the framework of DNA hydrogels to construct magnetically controllable DNA hydrogels.

If you’re wondering what “DNA hydrogels” are all about, another paper published in 2019 reveals some clues: DNA hydrogel-empowered biosensing

That paper explains how “smart hydrogels” self-modify in response to the organism: (emphasis added)

Recently, DNA-based materials have attracted substantial consideration for the exploration of smart hydrogels, in which their properties can change in response to chemical or physical stimuli. In other words, these gels can undergo switchable gel-to-sol or sol-to-gel transitions upon application of different triggers. Moreover, various functional motifs like i-motif structures, antisense DNAs, DNAzymes, and aptamers can be inserted into the polymer network to offer a molecular recognition capability to the complex. In this manuscript, a comprehensive discussion will be endowed with the recognition capability of different kinds of DNA hydrogels and the alternation in physicochemical behaviors upon target introduction.

Starting to get the picture?

Once these nanostructures are assembled inside the body, they are controlled through external magnetic fields or electromagnetic broadcasts, requiring very little power.

What this research demonstrates is that:

If you’re still not convinced, consider this text from a study published nearly a decade ago, in December of 2012:

This review covers recently-developed magnetically-driven delivery systems, their unique characteristics, and their applicability for the delivery of biotherapeutics. Since methods for synthesis of SPIONs and use of SPIONs as MRI contrast agents for diagnosis have been extensively reviewed [18, 19], this review focuses on the SPION-based formulations that are specific to the delivery of biotherapeutics. Magnetic nanoparticles dispersed in organic solvent and aqueous solutions can be loaded within liposomes, micelles, hydrogels, and micro/nanospheres during formulation.

First, we examine recent formulation strategies for modification of SPIONs including particle clustering and encapsulation within hydrogels, liposomes, micelles, and micro-/nano-spheres. Second, we discuss the considerations to be taken into account in the design of SPION-based carriers for the delivery of specific biotherapeutics including cells, proteins/peptides, genes, and viruses. Further, we examine several commercial magnetic nanoparticles for the delivery of biotherapeutics. Finally, we provide perspectives in the future directions of magnetically triggered, SPION-based carriers for biotherapeutics, and their potential clinical applications.

That was nearly a decade ago. Imagine what has been developed and deployed in the years since.

I discuss more details of all this beginning around minute 57 in today’s Situation Update podcast: