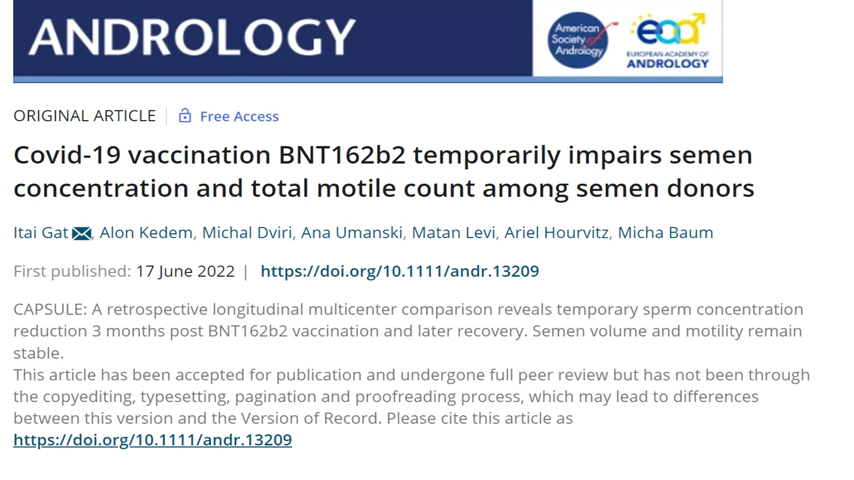 One of the great early misapprehensions about mRNA vaccines is that they would not have widespread, systematic effects, instead of remaining relatively localized. this was rapidly debunked and early studies showed widespread penetration of organs with a particular and perhaps unfortunate preference for concentration in ovaries and testes. (this was discovered early in japan, then denied vehemently by armies of “fact-checkers” only wind up proven in Pfizer’s own documents gained through FOIA and lawsuit.)

these mRNA drugs are broadly systemic and concentrate in (amongst others) reproductive organs and their effects on menstrual cycles are widely documented.

in light of this quite worrying fact (especially with a compound carrying high CG enrichment relative to the actual virus and the attendant risks thereof), it has been surprising to me that there have not been more studies on this topic.

but a few are starting to emerge. this Israeli study was published 4 days ago:

and the results are, well, nuts. (sorry)

there was strong a priori reason to suspect effects, especially in light of the higher and more persistent prevalence of vaccine-induced S proteins vs natural infection and the CG enrichment issued mentioned above.

Over the first pandemic months, there was insufficient data regarding the possible impact of Covid-19 on human reproduction. Yet, it was clear it employs the Angiotensin-Converting Enzyme 2 (ACE2) receptor for cellular entry 3, 4.Various testicular cells including Leydig, Sertoli, spermatogonia and spermatozoa express ACE2 and related proteases resulting with viral fusion 5, 6. Cytokine storm-induced dysfunction, autophagy regulation and damaged blood-testis barrier were also suggested as possible pathogenic mechanism for testicular damage 7. Clinical reports of orchitis, supported by histological findings, further emphasized testicular involvement 8, 9. Therefore, detrimental impact on both spermatogenesis and testosterone production 10 seem an obvious outcome they evaluated donors from 3 sperm banks over a longitudinal period commencing before pfizer vaccine and following up after.

the study was performed and followed up according to the following timeline around vaccination.

and from this, substantial effects on sperm concentration and overall motile count were discovered.

the authors draw a set of conclusions from this:

and from this state:

but I am left wondering about these claims and fear they may provide an example of the sort of “nerf or refute your own findings in the abstract so that we can publish this without massive controversy” behavior that has become all too common in medical and scientific journals who withhold peer review from those whose findings look too worrying if stated plainly. (but that will often let such data out if buried deep in supplements and appendixes)

this is why you should always read these data repositories. because they often tell quite a different tale than the abstract.

here’s table two from this same study. notice anything?

I’m struggling to see how one could call this “recovery.”

the total motile count was slightly recovered from T2, but was still down 19.4% vs baseline, seeming to make up somewhat in volume that is lost in concentration.

both results were statistically significant at a 95% confidence interval and nearly so even at T3.

there is a greater than 97% chance that the TMC figure is real and not random.

those are not odds you want to buck.

this raises some serious concerns for a number of reasons:

when you rush vaccines to market, especially vaccines using an entirely new and poorly understood modality that has never before been approved or even used in humans, you’re going to get all manner of nasty surprises and this looks to be yet another.

and clearly, it was missed. this was not even mentioned as a possibility in any FDA proceedings of which I am aware.

and THAT is why vaccine development generally takes place over 5-10 years, not 5-7 months.

best I can tell, we cannot even yet rule out that these effects are permanent.

and, of course, we have zero ideas about what they might do to pre-adolescents and possible impacts on their healthy sexual development and ultimate fertility.

and yet the US is bucking the trend in most of Europe and approving these drugs for not just the young and healthy but for kids from 6mo-5 yr. this feels reckless.

we have little idea what this may be doing to ovaries and eggs either as these are much more difficult and invasive to study (and will likely need to be assessed by autopsy). this is another analysis that desperately needs to take place because unlike sperm, eggs to not replenish, so if you damage them, that’s that.

add to this effects on normal development and it could take decades to see what happened.

people have historically trusted vaccines because they underwent serious, long-term testing before being pushed wide. the assessment was measured in decades, not months and even a tiny number of adverse events would pull them off the market.

to trade upon that trust while abandoning all the safeguards that enabled it is bad science and worse public health policy.

how many more examples of unforeseen outcomes must we endure before this simple truth is accepted?