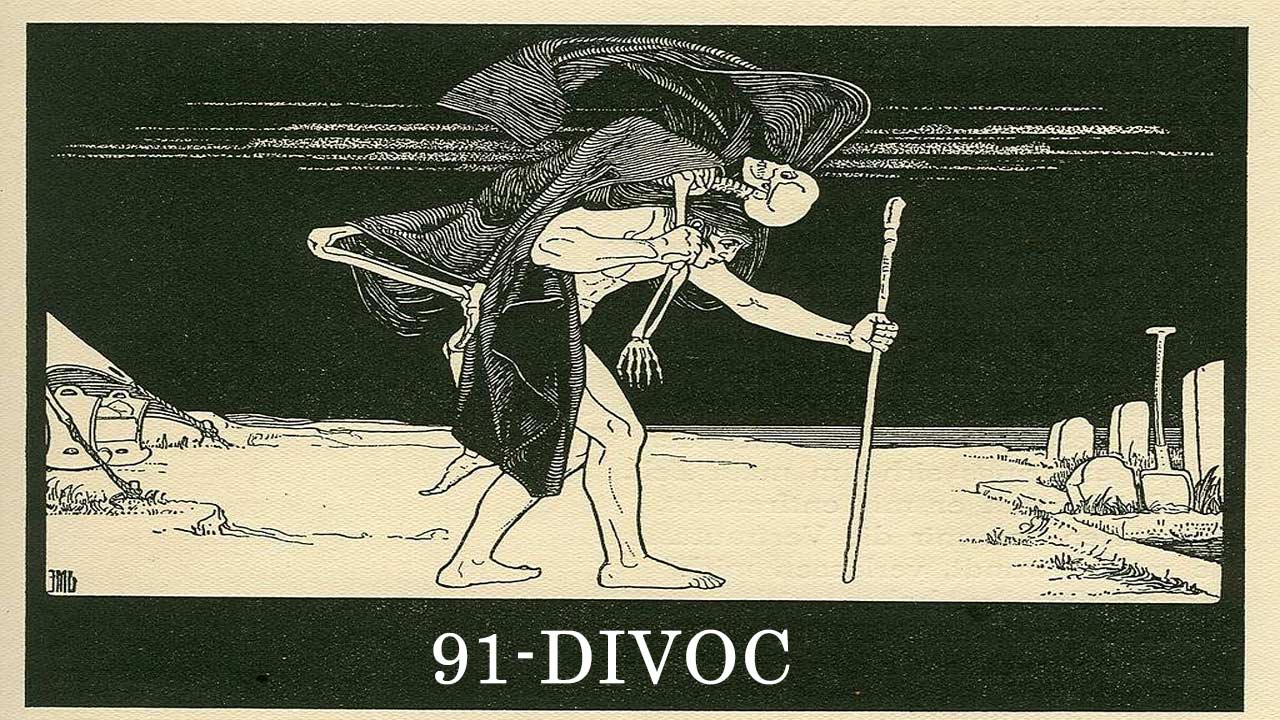 Unlike the English language, which is written and read from left to right, Biblical Hebrew, the original language of the Old Testament is transcribed right to left. And so it goes with the esoteric mystery religion of the Luciferian elite who mimic The Ancient of Days. Reading, writing and walking backward are methods used by occultists to communicate their thoughts and intentions.

This brings us to the hidden meaning of COVID-19. On the surface, COVID-19 is an acronym for Corona Virus Disease and its year of discovery 2019. Applying the backward syntax of  Biblical Hebrew COVID becomes DIVOC, a Hebrew word meaning possession by an evil spirit. Translated into English DIVOC becomes DYBBUK.

According to Yoram Bilu, a professor of anthropology and sociology at the Hebrew University of Jerusalem dybbuk has a sinister connection to spiritual possession.

“ The term dybbuk (dibbuq) was used in Jewish mystical circles to designate a spirit of a dead person, a notorious sinner in his lifetime, that took temporary possession of a human being. Dybbuk possession was always conceived as an affliction or an illness and the possessing agent a foreign, dangerous intruder that had to be expelled. The exorcist was always a revered rabbi who confronted the spirit with various religiously informed measures used in a fixed, graded order. Dybbuks, demons or evil souls possessed some unhappy or mentally sick creature. Dybbuk possession left the victim as a passive object, temporarily bereft of self-awareness and without self-control vis-à-vis two external authorities: the possessing spirit who deprived the possessed of her individual identity and the rabbi-exorcist who compelled the spirit to leave ”

Here’s where the rabbit hole gets darker.. The word Dybbuk originated from the Hebrew verb dabag, which means to “cling” or “to adhere. Just as a dybukk adheres to the body, the toxic spike protein from the injection clings to the cell and takes control of it. .

From the MIT Technology Review:  The virus’s protein spikes attach to a protein on the surface of cells, called ACE2. Normally, ACE2 plays a role in regulating blood pressure. But when the coronavirus binds to it, it sets off chemical changes that effectively fuse the membranes around the cell and the virus together, allowing the virus’s RNA to enter the cell. The virus then hijacks the host cell’s protein-making machinery to translate its RNA into new copies of the virus [23]. ”

It appears fear is the predominant spirit permeating the COVID-19 plan-demic, and maybe responsible for a twisted view of reality held by many of the vaccinated. The other day I was reading an article about a man who received both shots and still died of covid. In conclusion the writer noted it was a fortunate the victim got both jabs or else he would have suffered a more painful death. The cognitive disconnect within the covid cult is perplexing, until it’s viewed through a spiritual prism. Does the trauma of extreme fear open the door for oppression by a dybbuk, and thus cloud the victims view of reality?

This leads us to the occultic practice of alchemy, the transmutation of base metals like lead into gold via an elusive object known as the Philosopher’s Stone. Spiritually, alchemy’s goal is the re-construction of the world according to the will of man and not God. The Great Reset’s goal is not only a digital economic one world order, but the abolition of the church and the elimination of all governments, replaced by a centralized technocracy.

Famed occultist and freemason Manly P. Hall stated in this book “The Adepts in the Western Esoteric Tradition” wrote the following:

“ The alchemical tradition contains all the elements of a world program of enlightenment and reform. It requires only a superficial acquaintance with the philosophy and literature of alchemy in order to sense the magnitude of this concealed project. Had it been simply a science for the transformation of metals, there would have been no need for the Masters of the art to depart from Christendom and to take refuge in Islam ” “ The alchemical laboratory became the shrine of the spiritual sciences, taking the place of the ruined sanctuaries of the ancient Mysteries ”

Manly P. Hall believed in the occultic magick of “Solve” and “Coagula” as depicted on the arms of the Baphomet. Solve is the process of dissolving that which already exists in the material world created by God The Ancient of Days. And coagula, the process of reimagining, reforming, reorganizing, and rebuilding into a new world order, reflecting the light of Lucifer. I’m sure you’ve heard the mantra “Build Back Better” by the leaders of the current world order. Therefore alchemy for the Luciferian elite is the divine science of human redemption, regeneration, and resurrection. Replacing God, with Lucifer Morning Star, The Light Bearer.

Manly .P. Hall admitted the objective of the alchemists’ work is at a social level. Genesis Chapter 1 verse 26 states “And God said, Let us make man in our image, after our likeness: and let them have dominion over the fish of the sea, and over the fowl of the air, and over the cattle, and overall the earth, and over every creeping thing that creepeth upon the earth.”

Once a man takes the mark of the beast, he will no longer reflect the image of God, and the option of salvation is nullified. However, let’s not get ahead of ourselves. Without a physical Third Temple in Jerusalem and the arrival of the second beast mandating the mark. The current jab cannot be the mark.