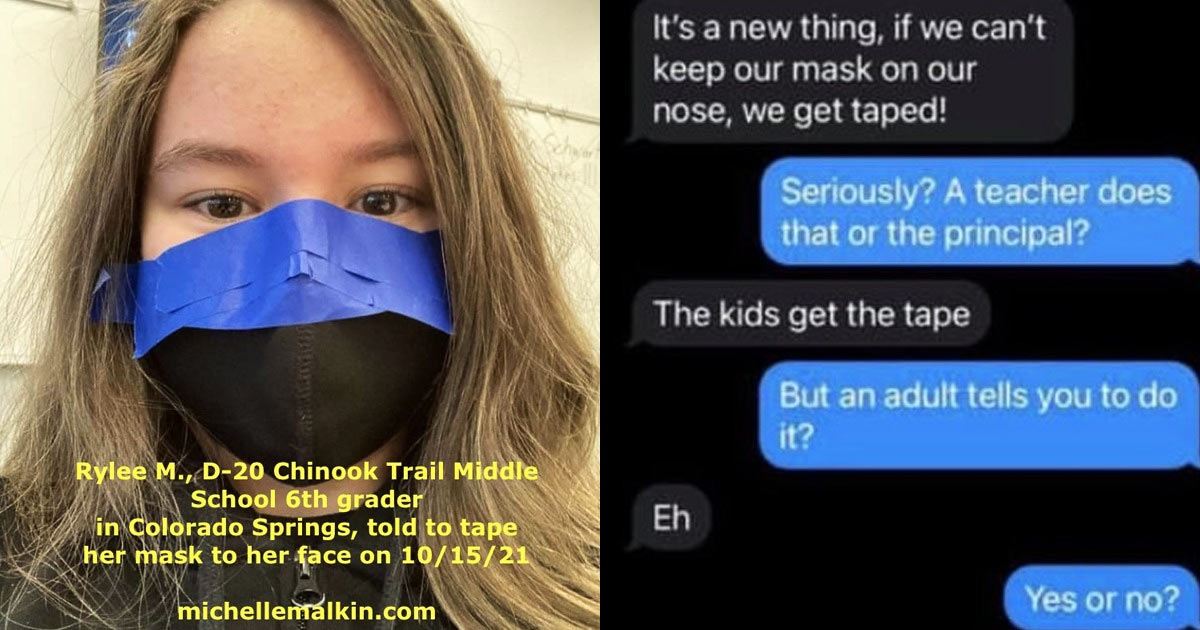 A Colorado school district says it has launched an investigation after Michelle Malkin shared the story of a 6th-grade student in Colorado Springs who says students are punished by being forced to tape face masks to their face if they are caught letting it drift below their nose.

According to Malkin, the student’s mother “rushed to Chinook Trail Middle School” after receiving a text message from her daughter about being given “blue painter’s tape to seal the mask to her face.”

In text messages shared by Malkin, the mother confronts her child, Rylee, over the blue tape and demands to know why it is on her face. The 6th-grade student replied, “It’s a new thing, if we can’t keep our mask on our nose, we get taped!” The student added, “I open my mouth and then the mask goes.”

The mother, identified as Stephanie M. by Malkin, asked who is instructing them to use this tape. “All teachers,” replied her daughter.

Stephanie rushed to Chinook Trail Middle School after her daughter texted her that a teacher gave her a warning and handed her blue painter's tape to seal the mask to her face. Rylee told her that at least 1 other student was also directed to do the same. /2 pic.twitter.com/SDigSaKqi1

In an audio conversation about the school’s mask mandate shared to social media, the child explained, “First we get a warning and then like they give us a tape, and we do it our selves so we can like learn.” An adult questioned, “What happens after the warning?”

On October 18, Malkin reported that she contacted the Chinook Trail Middle School principal and District 20 superintendent Thomas Gregory. “No response,” wrote Malkin. “Parents and 1 state rep. have pressed for a public parents’ meeting on the mask mandate since late September. No response.”

Malkin reports that Rylee, the student, has been pulled from the school effective last Friday. “It’s wrong. It’s child abuse,” Stephanie M. told Malkin. “And it was a horrible decision to implement the mask mandate.”

Local media later reported that the district had opened an investigation into the reports that children are given blue painter’s tape and must adhere masks to their faces with the adhesive.

“With the mask mandates and everything… she likes them because they hide her face ’cause of acne or whatnot. What really made me sad was that she didn’t see what was wrong,” Stephanie told Fox 21 News. “It’s a type of a restraint to me,” she added.

“It’s developing some sort of mentality in our children,” she told the news outlet. “Your face is you, that is how people know you. They are just doubling down on hiding you and not letting you breathe and… it’s conformity to the extreme.”

Despite photos and statements made public by the student’s mother, the school district claims they “do not have concrete findings.” Describing the reports as “serious allegations” in an email to parents, the district then thanked parents for their “patience and support” while they “take the appropriate steps.”

Meanwhile, regardless of the exact scenario that led to children placing tape on their faces, the El Paso County Health Department advises against taping masks. In a statement obtained by Malkin, the agency explained that it “is not involved” in the allegations against the school, but at the same time, “EPCPH would not recommend taping masks.”

I asked El Paso County Health Dept for their opinion on taping masks to kids' faces. Here is their statement: "EPCPH has not been consulted about allegedly taping masks to children. EPCPH would not recommend taping masks." @AcademyD20 @FOX21News @Darcy4CO @shane_sandridge /10 pic.twitter.com/GdOJ2431wz