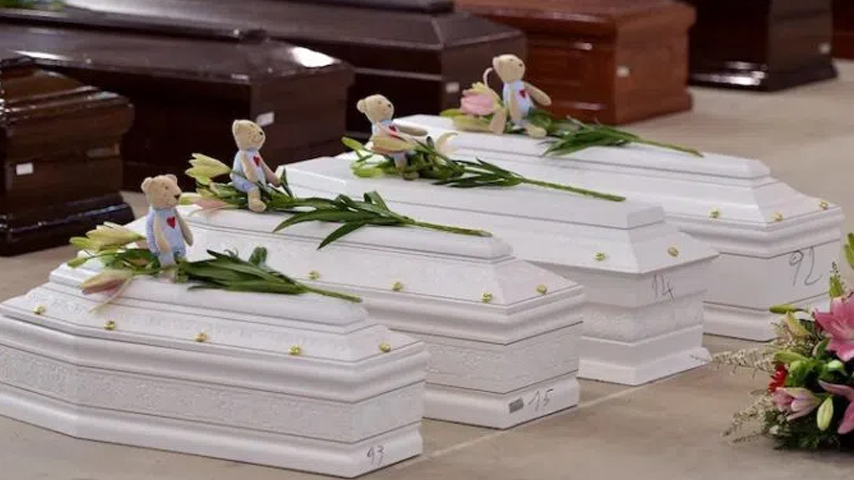 Replying to a Twitter user who said he’d spoken with funeral directors about an unusual rise in children who died shortly after being vaxxed, Canadian Twitter user @highesthalfling declared that his family’s casket business recently received two bulk orders for child-size coffins.

“My family business is casket manufacturing in North America. We have received 2 bulk orders for sub-5-foot units (children’s size) in less than 6 months. Never in 30+ years of business have we ever sold child-size coffins in bulk,” @highesthalfling tweeted.

Infowars.com reports: The same user made similar announcements over the past three months, once in April and again in June, though those tweets did not receive as much attention as his recent message.

“Vaccines are killing children. If not, what is?” the user wrote last month.

My family owns a casket manufacturing plant. I've said this publicly many times, we make coffins.

Yesterday my cousin received a request for a bulk order of under 5 foot caskets. Never has that ever happend in 37+ years.

For you idiots, those are children sized coffins.

FYI to anybody who's paying attention to what I say. My family received another bulk casket order for youth sized coffins. That marks the 2nd ever bulk order in almost 50 years. Both of which were placed in the last 7 months.

Vaccines are killing children. If not, what is?

Discussing the topic further, the man said, “The sudden demand for small caskets is undeniable,” adding, “the only thing that is a mystery is the reason why. I think we all know what is actually happening at this point.”

The man confirmed to another Twitter user that a bulk order would consist of 100 or more units.

Back in 2020, @highesthalfling said his family’s business supplies coffins to wholesaler Costco.

Writing at the Substack, “Clown World – Honk,” Etana Hecht appears to have corroborated the intel, claiming she spoke to the family that runs the business and confirmed the man’s story.

I spoke to the family who owns one of the largest casket manufacturers in North America. They supply caskets to huge chains across the US and manufacture Prime Caskets, among others. It’s horrific to have to report on such a thing, but the owners said that their sales of typical caskets have increased by 20%, and since Dec 2021 their sales of small-size caskets (under 5 feet, i.e, for children) have increased by 400%. He’s not the only one talking about it, those in the funeral industry are well aware of the sudden change in the nature of their business.

The rumors of bulk child casket orders come as the US government last month became the first nation to approve Covid vaccines for infants as young as six months old, while the Canadian government is set to approve jabs for the age group later this month.

God help us if the man’s story is true.