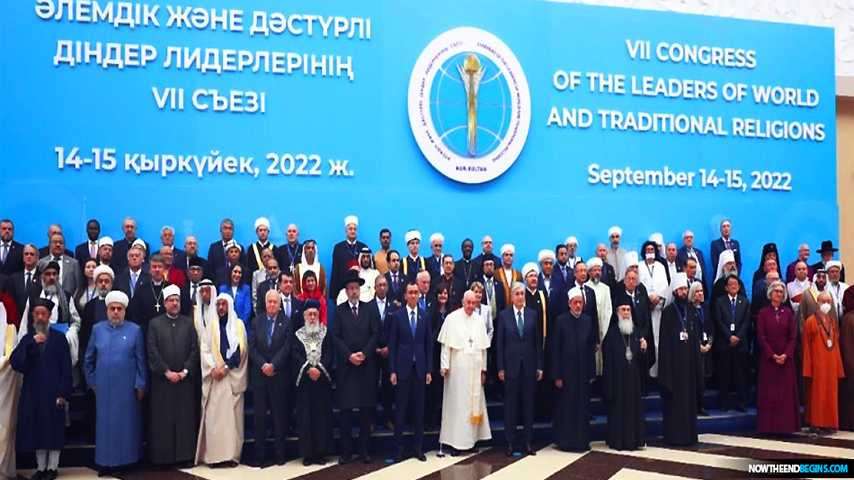 With the adoption this week by the 7th World Religions Congress of the Human Fraternity document created by Pope Francis and Mohamed bin Zayed, Chrislam is now the official One World Religion.

It’s official, Chrislam has now been codified and ratified, with the approval at the 7th Congress of Leaders of World and Traditional Religions, of the Human Fraternity document created by Pope Francis of the Vatican, and financed and promoted by Mohamed bin Zayed of the UAE. Question – Guess who they forgot to invite to the festivities? Answer – Jesus Christ, His Name appears nowhere and is never mentioned. I wonder who the ‘honored guest” is then? Hmm.

“For when they shall say, Peace and safety; then sudden destruction cometh upon them, as travail upon a woman with child; and they shall not escape.” 1 Thessalonians 5:3 (KJB)

Whether or not Pope Francis retires as some are suggesting, or whether or not he will be the biblical Antichrist is, at this point, rather immaterial. Because he has now put into place, and set into motion, the functional political, religious and financial framework on which the One World Religion of Chrislam will operate. Pope Francis could die tomorrow, but what he has created will live on into the time of Jacob’s trouble. Of course, all this prophetic fulfillment could not have taken place without his very generous patron and backer, Mohamed bin Zayed. Is he the “prince of the covenant”? Time will tell, but man oh man, this is a giant (pun intended) step forward. We warned you for the past 13 years Chrislam was coming, and now it’s here. Are you ready to fly?

FROM EMIRATES NEWS: The world religious leaders today adopted the Human Fraternity Document signed by His Eminence the Grand Imam of Al Azhar and Chairman of the Muslim Council of Elders, Dr. Ahmed el-Tayyeb, and His Holiness Pope Francis of the Catholic Church, in Abu Dhabi in 2019. This came during the 7th Congress of Leaders of World and Traditional Religions which concluded on Thursday.

Some highlights from the 7th World Congress of Religions:

The closing statement of the congress, which was attended by over 108 religious and world leaders, underscored the historical significance of the Human Fraternity Document, stressing that it helps promote peace, dialogue and mutual respect among people.

Held on 14th and 15th September at the Kazakh capital, Nur-Sultan, under the title “The Role of the Leaders of World and Traditional Religions in the Spiritual and Social Development of Human Civilisation in the Post-Pandemic Period”, the event saw the participation of Kassym-Jomart Tokayev, President of Kazakhstan, Dr. Ahmed el-Tayyeb and Pope Francis. READ MORE

This is Chrislam Of The One World Religion

Click to see what it looks like when a Chick tract comes to life. If you’re a Roman Catholic, click to minute 24:00 to hear your pope, the “vicar of Christ” give his entire speech on ‘interreligious dialogue’ never mention the Name of Jesus Christ one time. This is one of the many reasons why we say that Roman Catholicism is counterfeit Christianity.