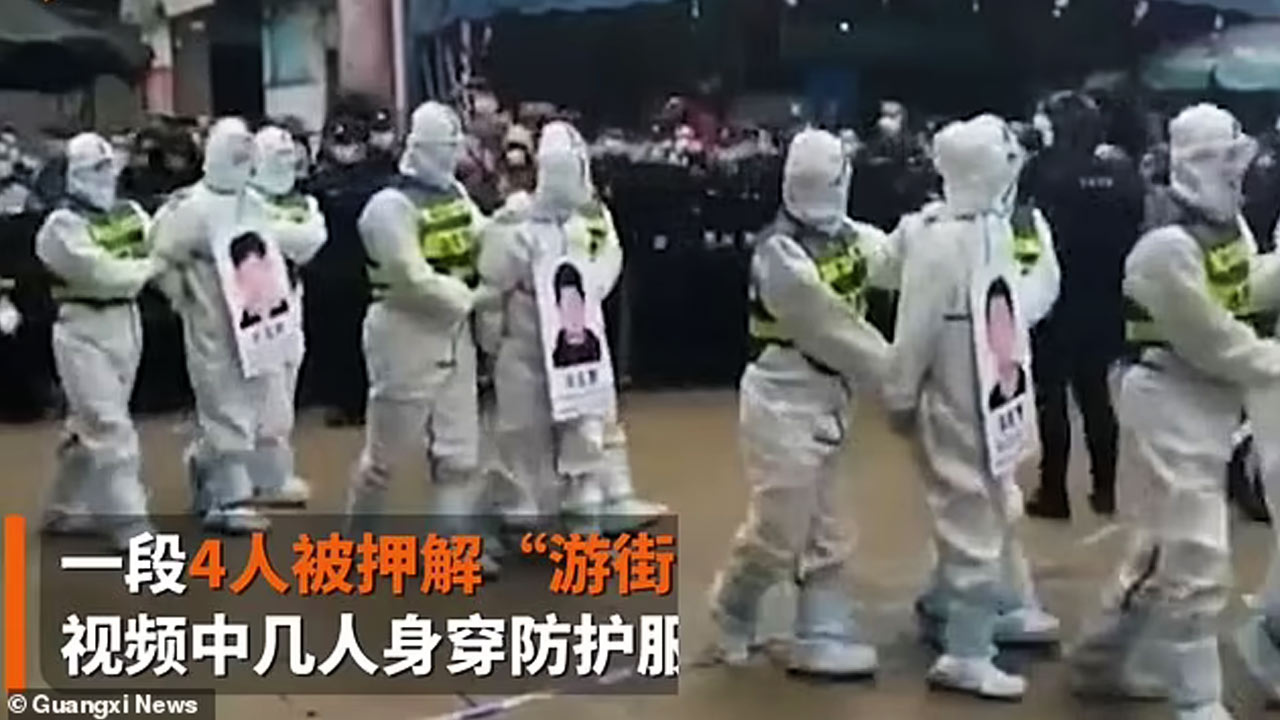 Armed riot police in southern China have paraded four alleged violators of Covid rules through the streets, leading to criticism of the government’s heavy-handed approach.

Photos of the event showed each suspect held by two police officers – wearing face shields, masks and hazmat suits – and surrounded by a circle of police in riot gear, some holding guns.

The public shaming was part of disciplinary measures announced by the local government in August to punish those breaking health rules.

China banned such public shaming of criminal suspects in 2010 after decades of campaigning by human rights activists, but the practice has resurfaced as local governments struggle to enforce the national zero-Covid policy.

It comes as locked-down residents in one of China‘s biggest cities say they are at risk of starving in their homes after they were banned from going outside even to buy food under harsh new Covid measures sparked by just a few dozen cases.

Apparatchiks running the city of Xi’an on Monday told 13 million people they are only allowed out of their homes when invited to take part in a new round of mass testing, or for medical emergencies.

The four individuals paraded through the streets of Jingxi city were also accused of transporting illegal migrants while China’s borders remain largely closed due to the pandemic, Guangxi News said.

Jingxi is near the Chinese border with Vietnam.

The newspaper said the parade provided a ‘real-life warning’ to the public, and ‘deterred border-related crimes’.

But it also led to a backlash, with official outlets and social media users criticizing the heavy-handed approach.

Although Jingxi is ‘under tremendous pressure’ to prevent imported coronavirus cases, ‘the measure seriously violates the spirit of the rule of law and cannot be allowed to happen again,’ Chinese Communist Party-affiliated Beijing News said Wednesday.

Other suspects accused of illicit smuggling and human trafficking have also been paraded in recent months, according to reports on the Jingxi government website.

Videos of a similar parade in November showed a crowd of people watching two prisoners being held while a local official read out their crimes on a microphone.

They were then seen marching through the streets in their hazmat suits, flanked by police in riot gear.

Meanwhile, officials in the city of Xi’an on Monday told 13 million people they are only allowed out of their homes when invited to take part in a new round of mass testing, or for medical emergencies.

Previously, one member of each household was allowed out once every two days to buy food. City officials said people in ‘low risk’ areas will be allowed out to buy essentials once testing is complete and if their results are negative.

The tightened lockdown measures prompted some Xi’an residents to turn to social media for help, saying they are ‘starving’ and appealing to neighbors for supplies.

‘I’m about to be starved to death,’ wrote one person on Weibo, China’s equivalent of Facebook. ‘There’s no food, my housing compound won’t let me out, and I’m about to run out of instant noodles … please help!’

‘I don’t want to hear any more about how everything is fine,’ said another. ‘So what if supplies are so abundant – they’re useless if you don’t actually give them to people.’

Xi’an reported 175 new cases on Tuesday, a paltry figure compared to other large cities around the world but a major blow to China which is continuing to pursue a ‘zero Covid’ strategy even in the face of more-infectious variants.

Nearby cities have also logged cases linked to the flare-up, with Yan’an – about 185 miles from Xi’an – on Tuesday shuttering businesses and ordering hundreds of thousands of people in one district to stay indoors.

Xi’an’s outbreak is being driven by the Delta variant and is believed to be linked to travel to Pakistan a week ago.

The city has been in lockdown since last Thursday when mass testing revealed a case had escaped quarantine and then spread the virus widely.

The 13million-person lockdown is also China’s largest since Wuhan was locked down early in 2020, which affected 11 million people.

On Sunday, city workers were dispatched to disinfect public spaces with residents warned not to touch anything until the chemicals had time to disperse.

Lockdown rules were then tightened on Monday evening as a fifth-round of mass testing got underway.

Doctors, journalists who try to SAVE lives during the Corona virus pandemic are being arrested, threatened and censored