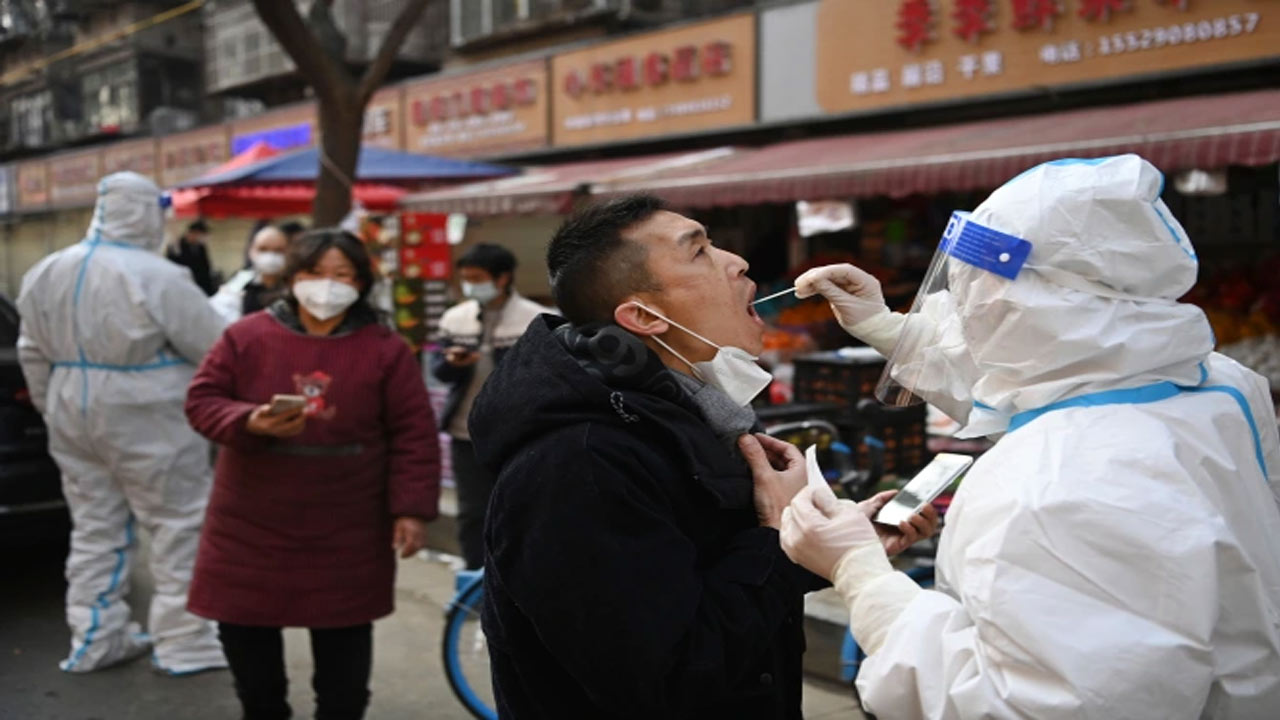 CHINESE authorities reportedly raided dozens of homes in the middle of the night and forced people onto buses to quarantine camps under the world’s strictest lockdown.

The 13 million people living in the northern city of Xian have been banned from leaving their homes – even for essential reasons like buying food – to squash the rising tide of Covid infections.

The harsh lockdown comes as a string of hugely positive studies show Omicron IS milder than other strains, with the first official UK report revealing the risk of hospitalization is 50 to 70 percent lower than with Delta.

Covid booster jabs protect against Omicron and offer the best chance to get through the pandemic, health officials have repeatedly said.

The Sun’s Jabs Army campaign is helping get the vital extra vaccines in Brits’ arms to ward off the need for any new restrictions.

But China is clearly sticking to its zero-tolerance approach to Covid – with reports of residents being shipped off to quarantine camps in the middle of the night.

It is not known exactly how many people were ordered to leave during the midnight eviction, but one person reported seeing 30 buses, while another claimed up to a thousand people were moved.

People said they had been left waiting on the buses for several hours and those taken to the quarantine facilities included elderly people, young children and pregnant women, according to reports.

A picture of an old man standing alone in the cold as he waited to be put on a bus reportedly went viral online.

People shared images of the quarantine facilities, claiming it was cold and they had not been given food.

One comment said: “There is nothing here, just basic necessities… Nobody has come to check upon us, what kind of quarantine is this?

“They did a big transfer of us, more than a thousand people, in the night and many of us are elderly people and children.

“They didn’t make any proper arrangements and so they just carelessly placed us [here].”

China has logged 131,300 cases and 5,699 deaths since the pandemic kicked off, but its citizens have faced some of the toughest measures in the world.

Xian, a popular tourist destination, is one of the largest Chinese cities to be locked down since Wuhan was sealed off in January 2020 when the first Covid cases started to emerge.

A total of 1,451 cases have been recorded in Xian since December 9 – the highest tally for any Chinese city in 2021, prompting panic among the authorities.

And officials are punishing people who try to escape the latest lockdown or evade the ramped-up rules.

But starving residents have been begging for food on social media.

Over the weekend, a video emerged of a man allegedly being beaten by the authorities for leaving his home to buy steamed buns went viral.

Authorities in the city later confirmed the workers had been punished, according to the BBC.

In another incident, a student claimed she had eaten instant noodles for two weeks and only had five packs left.

On social media, one resident said: “I heard other districts are gradually getting supplies, but I didn’t get anything. My compound bans us from going out. I ordered some groceries online four days ago, but no sign of getting it at all. I haven’t been able to get any vegetables for days.”

Another posted: “The allocation is so uneven. The district I’m based in hasn’t got anything. We are told to group up and order together. The price is very high as well.”

No Regard For Life

Footage posted on Twitter showed a group of locals arguing with police over the lack of supplies.

A man can be heard telling the authorities that his family has run out of food, and a woman can be heard saying: “We’ve been locked down for 13 days. The Resident’s basic life can’t be sustained.

“We queued for three to four hours [to buy vegetables]. But they don’t allow it to be sold anymore.”

State-owned newspaper Global Times reported there was a shortage of deliverymen as many were under quarantine themselves.

Meanwhile, anyone caught driving during the lockdown risks being jailed after the worst outbreak in 21 months.

Health officials and police will “strictly inspect” vehicles on the roads and those who break the rules could face ten days in detention and a 500 yuan fine (£58).

People living in the shuttered city must only leave their houses to get a Covid test – or in a medical emergency.

Local cops have also hunted down people attempting to duck the tight controls, including one man who tried to wade across the Wei River to get out of town.

He was given a warning, according to the government, Bloomberg reports.

Cops said another man who pedaled about 80 kilometers on a shared bicycle to his hometown was fined and sent to quarantine.

Meanwhile, a bloke who hiked 100 kilometers from the airport to a nearby county was marched to quarantine by police and handed an unspecified punishment.

Earlier this week Chinese lockdown rule-breakers were publicly shamed and paraded through the streets carrying placards with their names on in a bid to ensure Covid rules are obeyed.