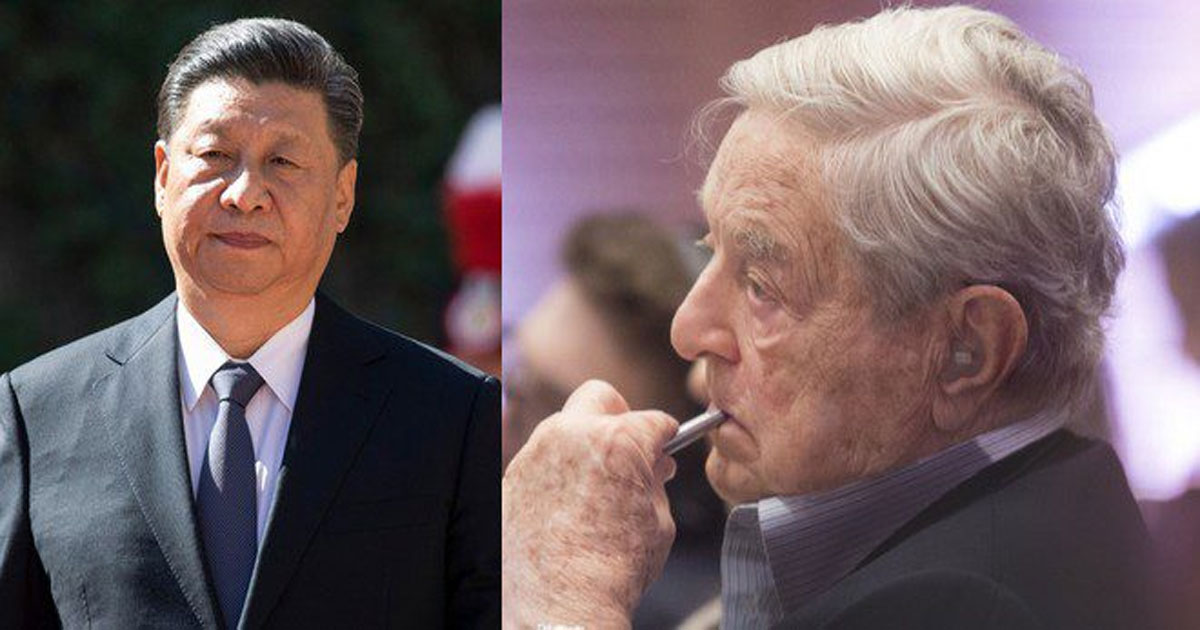 The rich and powerful frequently collect enemies on their climb to the top but billionaire George Soros seems to have more than his share of haters. As part of an ongoing tit-for-tat, a Chinese media labeled him “the son of Satan”, among other choice epithets.

With a net worth estimated at $8.6 billion, George Soros represents a significant economic entity. Coupled with the $32 billion he has invested in his left-wing political “philanthropy”, The Open Society Foundations, Soros is as influential as some countries.

As a world player, Soros has been very critical of China. In an interview in Foreign Policy in 2015, Soros praised China’s economy as having “not only a more vigorous economy but actually a better functioning government than the United States.” But he also criticized China, saying, “ “China has risen very rapidly by looking out for its own interests … They have now got to accept responsibility for world order and the interests of other people as well.” At the same time, he suggested that an alliance between China and the US could avert a military confrontation.

But this possibility of an alliance disappeared after China recently instituted a wave of intense regulatory actions, prompting a sharp sell-off in shares of New York-listed Chinese companies, a move adopted by Soros’ investing companies. Soros warned that while new rules were designed to target tech companies, they should also be regarded as a sign that Chinese President Xi Jinping will do whatever it takes to stay in power.

President Xi tried to offset this loss in investment by offering business opportunities to investment corporations. Blackrock, the world’s largest asset manager, along with several other major investors, took advantage of those opportunities, entering the Chinese market as the country’s first wholly foreign-owned mutual fund, raising $1.03 billion from more than 111,000 investors. With such results, many other investment corporations followed suit.

In an op-ed in The Wall Street Journal headlined “BlackRock’s China Blunder”, Soros criticized BlackRock. Soros warned the western investors by accusing China’s President  Xi Jinping of carrying out the socialist agenda of nationalizing the private sector by  turning all of China’s companies into “instruments of the state.”

Soros wrote that Blackrock clients are likely to lose money and the national security interests of the U.S. and other democracies will be damaged. Soros unequivocally sees China as an adversary,  writing that “the U.S. and China are engaged in a life-and-death conflict between two systems of governance: repressive and democratic.”

He called for the US government to counter the effects of the Chinese government manipulating business and investing.

“The US Congress should pass a bipartisan bill explicitly requiring that asset managers invest only in companies where actual governance structures are both transparent and aligned with stakeholders,” Soros wrote two weeks ago in a separate op-ed. “If Congress were to enact these measures, it would give the Securities and Exchange Commission the tools it needs to protect American investors, including those who are unaware of owning Chinese stocks and Chinese shell companies. That would also serve the interests of the US and the wider international community of democracies.”

The People’s Republic of China responded harshly to the billionaire’s accusations. The PRC-controlled media, The Global Times, a Chinese government-controlled media, published an op-ed titled “This global economic terrorist is staring at China!”, on September 4th naming Soros as the culprit. The article accused Soros of providing finance to Hong Kong’s jailed newspaper owner Jimmy Lai to support the city’s anti-Beijing protests in 2019. The article claimed his motivation was sour grapes over dumping investments in China that later proved to be enormously lucrative.

The op-ed also described Soros as “the most evil person in the world” and “the son of Satan.”

Soros has unquestionably changed the face of US politics, bolstering the left-wing with his deep pockets. He donated over $1 million to Obama’s 2012 presidential campaign and over $8 million to Democratic campaigns during Hillary Clinton’s unsuccessful; bid for the White House. In 2020, Soros was one of Joe Biden’s largest contributors, donating at least $500,000 to his campaign.

These efforts are not universally supported and in September 2017, a petition to have him branded a “domestic terrorist” garnered over 100,000 signatures in two weeks.

If the billionaire is a country, it has a vibrant foreign policy. Soros influenced the collapse of communism in Eastern Europe in the late 1980s and early 1990s. But this influence is sometimes unwelcome.  Soros-backed pro-democracy initiatives have been banned in Kazakhstan and Turkmenistan. Due to his political activities,  Russia passed a special law prohibiting NGOs from taking money from foreigners. In 1997, Soros closed his foundation in Belarus after it was fined $3 million by the government for “tax and currency violations.”Since 2012, the Hungarian government has labeled George Soros as an enemy of the state, due to his political involvement in the European refugee crisis. Soros is known as “The Man Who Broke the Bank of England” because of his short sale of US$10 billion worth of pounds sterling, which made him a profit of $1 billion during the 1992 Black Wednesday UK currency crisis. In November 2018, Soros was accused by Turkish President Recep Tayyip Erdoğan of supporting and financing “terrorists” in the 2013 Gezi Park protests.

In March 2017, six US senators sent a letter to then-Secretary of State Rex Tillerson asking that he look into several grants the State Department and the US Agency for International Development (USAID) have given to groups funded by “left-wing” Soros. According to the Heritage Foundation, the letter expressed specific concern about Soros’s influence on Macedonian politics, a concern which has also been expressed by members of the Macedonian government. Soros was accused of using his organization to destabilize the Macedonian government.

Soros’ big-money support of Democrats has earned him friends in the power structure. Replacing the word “God” with the name of the Speaker of the House in  a disturbingly irreverent manner, his son Alexander posted a friendly tweet on Thursday, declaring “In Pelosi we trust”:

In Pelosi we trust! Was good seeing @SpeakerPelosi this weekend. pic.twitter.com/dguGCxDm37

Some comments noted that the political elitists were neither socially distanced nor were they wearing masks.

Soros is ethnically Jewish and lived through the Holocaust in Hungary, surviving as a courier for the Jewish council that identified and kept track of the Jews for the Nazi occupiers. He later assumed a fake name, and his father paid a Christian government official to take the boy in as his “godson.”Nonetheless, he funds anti-Israel groups and has publicly compared Israel to Nazi Germany. He has funded NGOs which have been actively critical of Israeli policies including groups that campaign for the anti-Semitic Boycott, Divestment, and Sanctions movement against Israel. Ironically, criticism of Soros is frequently delegitimized as being “anti-Semitic.”

This Is What Will Happen To The U.S. Economy When We Go To War With China