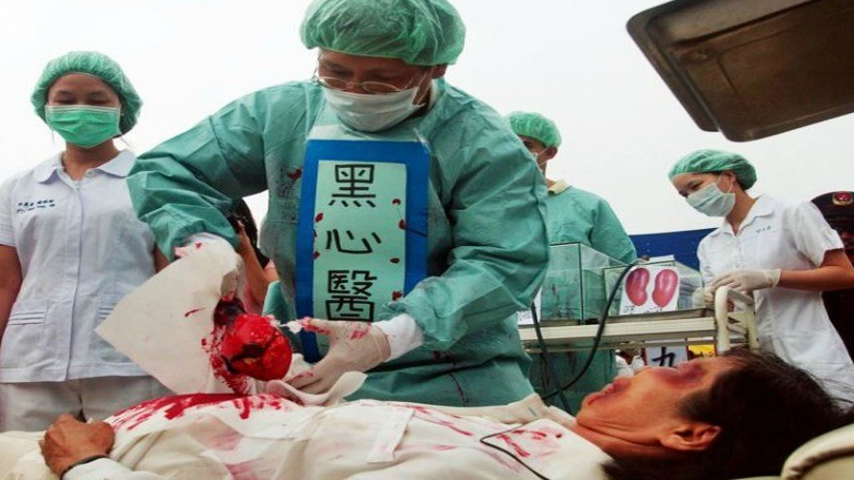 One of the world’s top experts on China’s forced organ harvesting industry told Congress on Thursday the Communist Party may be “harvesting” as many as 50,000 concentration camp victims, killing them to sell their organs, a year.

Ethan Gutmann – a senior research fellow in China studies at the Victims of Communism Memorial Foundation and co-author of the landmark works on the subject, “Bloody Harvest” and “The Slaughter” – noted each healthy individual killed to extract his or her organs could yield two or three organs, meaning China would be selling as many as 150,000 organs from these victims.

Gutmann testified alongside several other experts – including Enver Tohti, a surgeon from East Turkistan who claims to have been forced to harvest organs from a political prisoner in 1995 – at a hearing organized by Rep. Chris Smith (R-NJ), the chair of the Tom Lantos Human Rights Commission, on Thursday titled “Forced Organ Harvesting in China: Examining the Evidence.”

The hearing followed the publication of years of evidence that China was killing healthy people to sell their organs on the black market to wealthy buyers, most recently a study published by researchers at Australian National University (ANU) in April accusing China of “execution by heart removal.”

China has built a network of upwards of 1,000 concentration camps in occupied East Turkistan, its westernmost region and home to the majority of members of the Uyghur ethnic group, in the past half-decade, using them to torture, indoctrinate, enslave, rape, and kill Uyghurs and other members of religious and ethnic minorities. Chinese officials do not deny the existence of the camps but claim they are “vocational training centers” where indigenous people Beijing perceives as backward learn trade skills to compete in the modern Chinese economy.

Citing interviews with concentration camp survivors, Gutmann told Congress that testimonies indicate that China screens concentration camp victims to see if their organs would be useful for transplants and those who pass the test abruptly disappear.

“There are two kinds of people who leave the camps early: The first are young people, about 18 years old. The announcement that they are ‘graduating’ is often made during lunch. Sometimes light applause is encouraged,” Gutmann explained. “‘Graduation’ is a euphemism for forced labor, often at a factory out east.”

“The second group’s average age is usually 28 or 29 – the exact stage of physical development that the Chinese medical establishment prefers for organ harvesting,” he continued. After medical tests, he noted, those chosen in this group “vanished in the middle of the night. Witness testimony from approximately twenty camps is strikingly consistent: between 2.5% to 5% annual disappearances for the 28-year-old age group.”

“If we assume that at any given time since 2017, there are approximately a million Uyghurs, Kazakhs, Kyrgyz and Hui in the camps, my estimate is that 25,000 to 50,000 camp detainees are being harvested every year,” Gutmann explained.

“Twenty-eight-year-olds from the Xinjiang [East Turkistan] camps can be theoretically harvested for two or three organs, translating into a minimum of 50,000 organs or a maximum of 150,000 organs,” he further concluded.

Gutmann and Tohti both noted in their testimonies that Chinese airports have express lanes for shipping organs and this phenomenon appears most prominent in airports in East Turkistan. Gutmann stated that he believes he has identified at least one “probable end user near Shanghai” that connects to an airport in Aksu, East Turkistan: “First Hospital Zhejiang Province.”

Gutmann called for the free world to cut all ties to the Chinese transplant industry and ban Chinese doctors with ties to the industry from cooperating in any way with their Western counterparts.

“This catastrophe was created by Beijing, yet it was continuously enabled by a handful of Western doctors who thought they could ride the Chinese dragon and come back home as if everything was normal,” he testified. “I don’t know the policy mechanisms that can reverse that. But the precedent is clear. We need to abolish all Western contact with the Mainland Chinese transplant industry. No Chinese transplant surgeons in our medical journals, our universities, and our conferences. And a freeze on all sales of surgical equipment, pharmaceutical development, and testing in China.”

Tohti narrated his experience as a young surgeon in 1995, dragged to an execution site and forced to rapidly cut the heart out of a political prisoner killed in front of him. He referred to East Turkistan as “a gigantic open-top human laboratory” that he accused the Chinese of using not just for live organ harvesting, but for copious nuclear weapons tests and, potentially, bioweapons research.

“A former Colonel Ken Alibek, of the Russian Red Army laboratory in Kazakhstan, reported in his book that Chinese may have tested bioweapon in Xinjiang in 1980,” Tohti noted. “I certainly remember that – that was the first year of my medical university, that many students were late for registration because of the barricade from plague and typhoid fever in the southern part of Xinjiang.”

In October 2017, Taipei, after I gave a talk on organ harvesting, a Taiwanese man approached me said: my brother went to Tianjing for his kidney, since he was aware of Falungong situation, that he asked his surgeon that he does not want Falun gong organs, his surgeon assured him that: now, all organs are coming from Xinjiang!

Rep. Chris Smith (R-NJ), who chairs the Tom Lantos Human Rights Commission, called for an “immediate concerted effort to stop this barbaric practice—not only in China but also by its global enablers” at the hearing on Thursday. Smith introduced legislation last year to sanction individuals found engaging in forced organ harvesting or the traffic of organs stolen from political prisoners called the Stop Forced Organ Harvesting Act of 2021. The bill would also require the State Department and Health and Human Services to provide regular annual reports on the topic so that lawmakers can properly know who to sanction and what further actions to take.