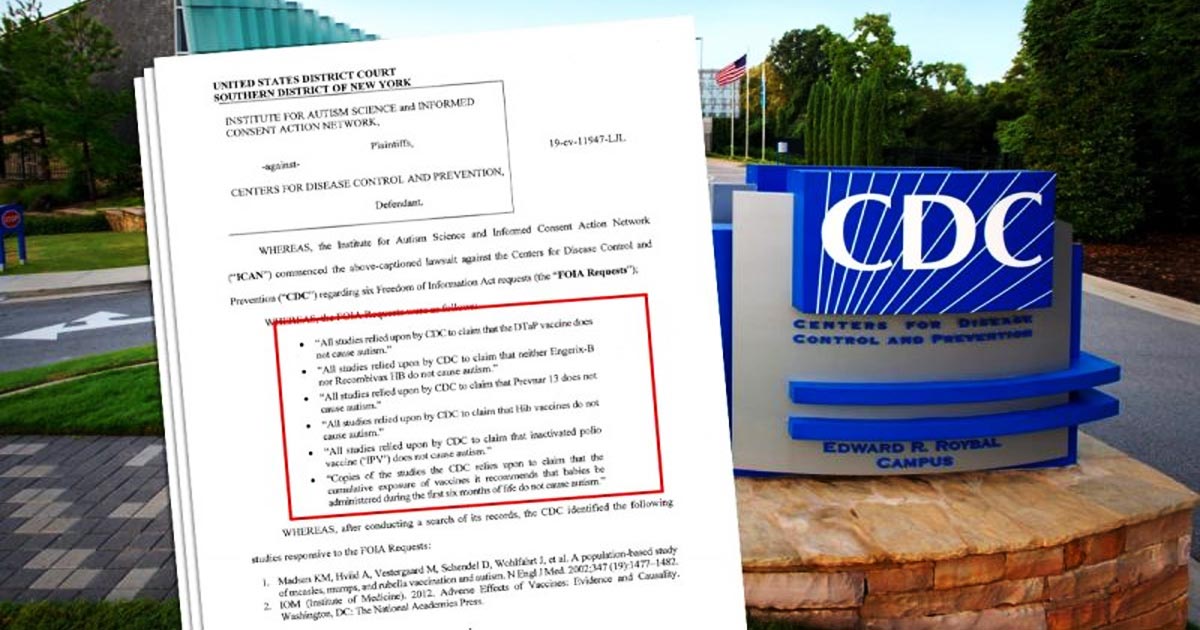 This is truly a bombshell story when you understand the full implications of it, yet major media likely will not touch it. Headlines could read “In stunning lawsuit, CDC admits they have no evidence vaccines don’t cause autism” – but instead, crickets.

Independent media organizations like CE are left to have to tell these stories, and at the same time risk more demonetization for telling the truth that the public should know.

Of course, we also know that since independent media’s reach has been cut, getting stories like this out is very hard and relies on you, the dear reader, to spread the word.

As of March 2nd, 2020, the CDC has admitted in federal court that they do not have any evidence proving that vaccines given to babies don’t cause autism.

For years they claimed that the studies had been done, the evidence was clear, and that there was a consensus: “vaccines don’t cause autism.” Yet, this was a lie.

An organization called the Informed Consent Action Network (ICAN) was instrumental in bringing forth this admission. As they stated in their own press release:

In summer 2019, ICAN submitted a Freedom of Information Act (FOIA) request to the CDC requesting “All studies relied upon by CDC to claim that the DTaP vaccine does not cause autism.”

ICAN also submitted this same request for HepB, Hib, PCV13 and IPV, as well as requesting the CDC provide studies to support the cumulative exposure to these vaccines during the first six months of life do not cause autism.

Despite months of demands, the CDC failed to produce a single specific study in response to these FOIA requests.

ICAN was therefore forced to sue the CDC in federal court, where the CDC finally conceded, in a stipulation signed by a Federal court judge, that that it has no studies to support that any of these vaccines do not cause autism.

In short, the CDC provided a list of studies that were to claim vaccines did not cause autism, only, none of these studies proved that. Part of the list was a recent review by the Institute of Medicine (IOM), which was paid for by the CDC.

This study performed a comprehensive review of studies relating to the DTaP vaccine. It was looking to determine whether or not the vaccine does or does not cause autism.

The IOM was unable to identify a single study to support that DTaP does not cause autism. What they did find was a single study that did show an association between DTaP and autism.

So for years, the CDC falsely claimed that “vaccines don’t cause autism.” This was based on no evidence, no studies, no science, just speculation.

In turn, those that questioned vaccines were called anti-vaxxers, unscientific and extreme about their views, yet were they wrong to claim that vaccines may cause autism and that they don’t feel they are safe?

It doesn’t seem to be the case when you consider that a look at the science and evidence available suggests it’s highly likely that vaccinees do play a role in autism. This, as we know now, has not been debunked nor fully proven.