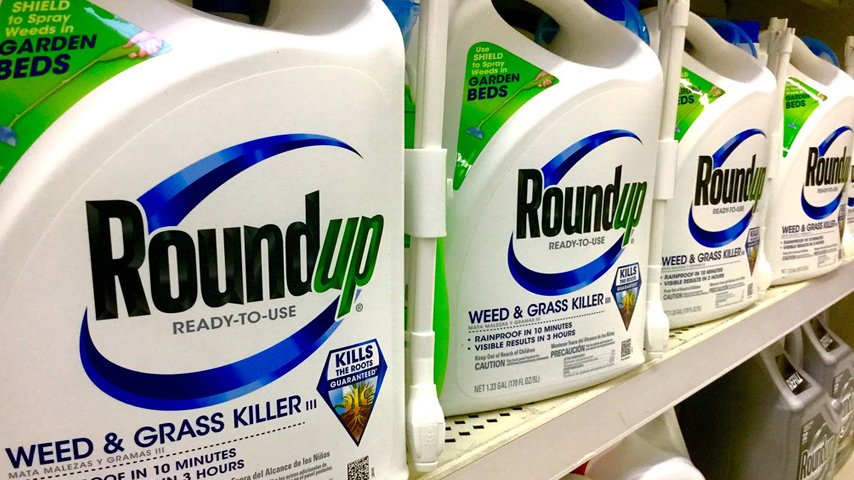 Monsanto weedkiller ‘Roundup’ which contains the poison glyphosate has now been found in 80% of the urine samples taken from Americans designed to represent the US population, and that’s very bad news.

Over the years, we have brought you many stories about the evil and corporate greed of Monsanto, a true end times company if there ever was one. In 2018, we told you how the people who made the Zyklon B gas that killed millions of Jews and gentiles in the Nazi Holocaust, Bayer Pharmaceuticals, purchased Monsanto, talk about a horror movie. Now in 2022, the Monsanto poison glyphosate, the active ingredient in their weedkiller ‘Roundup’, is showing up in the urine of 80% of the American population. The ‘weed of crime’ bears bitter fruit indeed.

“And the name of the star is called Wormwood: and the third part of the waters became wormwood; and many men died of the waters, because they were made bitter.” Revelation 8:11 (KJB)

‘Disturbing’: weedkiller ingredient glyphosate from Monsanto’s ‘Roundup’ tied to cancer found in 80% of US urine samples

FROM THE GUARDIAN UK: More than 80% of urine samples drawn from children and adults in a US health study contained a weedkilling chemical linked to cancer, a finding scientists have called “disturbing” and “concerning”.

The report by a unit of the Centers for Disease Control and Prevention (CDC) found that out of 2,310 urine samples, taken from a group of Americans intended to be representative of the US population, 1,885 were laced with detectable traces of glyphosate. This is the active ingredient in herbicides sold around the world, including the widely-used Roundup brand. Almost a third of the participants were children ranging from six to 18.

Academics and private researchers have been noting high levels of the herbicide glyphosate in analyses of human urine samples for years. But the CDC has only recently started examining the extent of human exposure to glyphosate in the US, and its work comes at a time of mounting concerns and controversy over how pesticides in food and water impact human and environmental health.

“I expect that the realization that most of us have glyphosate in our urine will be disturbing to many people,” said Lianne Sheppard, professor at the University of Washington’s department of environmental and occupational health sciences. Thanks to the new research, “we know that a large fraction of the population has it in urine. Many people will be thinking about whether that includes them.”

Sheppard co-authored a 2019 analysis that found glyphosate exposure increases the risk of non-Hodgkin lymphoma, and also co-authored a 2019 scientific paper that reviewed 19 studies documenting glyphosate in human urine. Both the amount and prevalence of glyphosate found in human urine have been rising steadily since the 1990s when Monsanto Co. introduced genetically engineered crops designed to be sprayed directly with Roundup, according to research published in 2017 by the University of California San Diego School of Medicine researchers.

Paul Mills, the lead researcher of that study, said at the time there was “an urgent need” for a thorough examination of the impact on human health from glyphosate in foods people commonly consume. More than 200 million pounds of glyphosate are used annually by US farmers in their fields. The weedkiller is sprayed directly over genetically engineered crops such as corn and soybeans, and also over non-genetically engineered crops such as wheat and oats as a desiccant to dry crops out prior to harvest. Many farmers also use it on fields before the growing season, including spinach growers and almond producers. It is considered the most widely used herbicide in history.

Residues of glyphosate have been documented in an array of popular foods made with crops sprayed with glyphosate, including baby food. The primary route of exposure for children is through the diet.

Monsanto and the company that bought it in 2018, Bayer, have maintained that glyphosate and Roundup products are safe and that residues in food and in human urine are not a health risk. They are at odds with many researchers and the International Agency for Research on Cancer, a unit of the World Health Organization, which classified glyphosate as a probable human carcinogen in 2015. READ MORE

When you think of the alarming public health scandals the world has endured, the curse of tobacco and asbestos quickly comes to mind. But now there seems to be another toxic villain, and incredibly, it’s likely to be sitting on a shelf in the backyard shed of most Australian families. Four years ago, the World Health Organisation warned that the herbicide Glyphosate, the main ingredient in weed killer Roundup, probably causes cancer.

A jury in San Francisco found biochemical giant Monsanto liable for former school groundskeeper Dewayne Johnson’s terminal cancer, due to his constant use of the weed killer Roundup. In a groundbreaking verdict, the jury awarded $289 million in total damages.