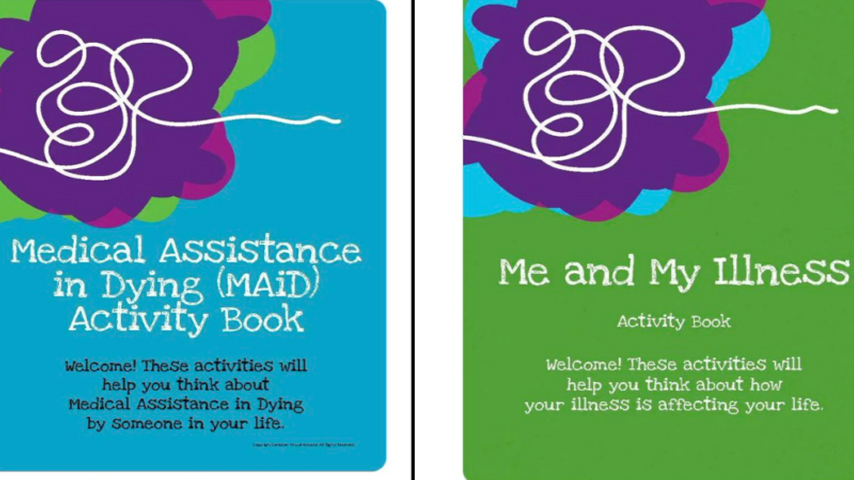 A web-based resource launched in 2004 to be a “platform [that] could address some of the national gaps in palliative care,” the Canadian Virtual Hospice was the first attempt at connecting Canadians with an array of health specialists online to help them face the daunting task of accompanying their ill and dying loved ones at the end of their lives. As reported on its website, “visits to Virtual Hospice continue to climb – from 34,000 in 2004 to 2.3 million in 2020,” which bespeaks the desperate need to shore up this crucial yet often-overlooked segment in healthcare.

On July 26th, 2022, the Canadian Virtual Hospice, which gets funding from such organizations as the Winnipeg Regional Health Authority, Health Canada, and Veteran Affairs Canada, announced its newest children’s resource available on its website:

https://t.co/eZbZLrz4Bu is home to The Medical Assistance in Dying (MAiD) Activity Book! Created for young people who have someone in their life who may have MAiD, this resources if available for free download. https://t.co/ugopiHYWus pic.twitter.com/um13rVqItL

The activity book is replete with vibrant colors, graphics, and a juvenile font, and includes a section that explains the three “medicines” taken to kill a human being. On page 4, Step number 3 states:

Meanwhile, some doctors have actually been frank in their admissions that they have no idea whether euthanasia “does not hurt,” since, as reported in a recent National Post article, during the euthanasia procedure:

Monitors aren’t used. There are no monitors measuring brain waves or heart activity. Doctors say it would take away from the intimacy of the experience for the person and the family.

This reassurance has also been challenged by Dr. Joel Zivot, an anesthesiologist and critical care doctor at Emory University School of Medicine who has studied how lethal injections impact prisoners’ bodies; he has called both for autopsies to be done on MAiD deaths to see exactly how the poison impacted the body, and for paralyzing agents to not be used in the procedure in order to have a more realistic assessment of the MAiD recipient’s experience (link).

While the activity book contains “helpful” exercises such as suggested questions the child can ask the would-be MAiD recipient and a feelings chart, Twitter user Dr. Christopher Lyon (@ChristophLyon) pointed out the inability of the activity book to address the fundamentally flawed premise behind assisted death – the fact that doctors cause a death instead of stopping it – and thus, it can’t help the child process the trauma of a betrayal of their trust in healthcare providers:

I understand the need to explain assisted suicide to children assisted suicide of a loved one.
However, kids who lose a parent or sibling to suicide can be deeply traumatised by the experience. What happens with children when doctors *help* the suicide instead of stop it? #MAiD https://t.co/VOQgbR9Irw

Even more disturbing, the MAID to MAD initiative (@VulnerableC7) pointed out the similarity in branding between the “Medical Assistance in Dying (MAiD) Activity book” and the “Me and My Illness” activity books that The Virtual Hospice provides, both aimed at children:

The branding and design continuity across these @VirtualHospice documents – both aimed at children – is striking. Wondering about associations being made in the minds of sick kids and #MAiD especially as #AMAD considers expanding MAiD to children (mature minors). pic.twitter.com/esjd550TMK

If the message being sent with this colorful and engaging activity book is that euthanasia is a normal, innocuous act that *doesn’t hurt* and is appropriate for anyone who is in pain, how can a sick and/or suffering child escape the conclusion that it may be an appropriate solution for them — especially once MAiD is extended to mature minors?