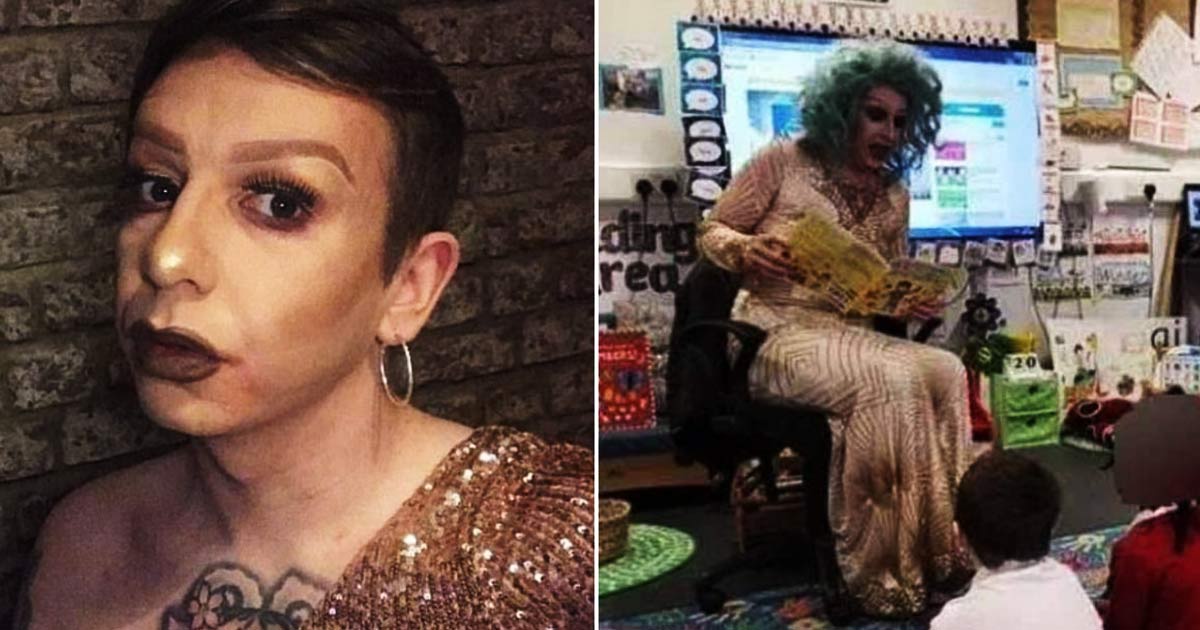 Drag queen FlowJob was invited to have intimate access to young children by the Glencoats primary school in Paisley, Renfrewshire last week. Flowjob not only spoke to kids, but also lectured them on the evils of the Section 28 Act, a law that is no longer in place that once banned the promotion of homosexual degeneracy in schools.

Parents are not happy that FlowJob received an opportunity to mold the minds of their children. Renfrewshire Council claimed they were unaware of FlowJob’s history of posting graphic, obscene and pornographic posts on social media and claimed they wouldn’t have invited him to the event if they were aware of these lewd posts.

Unfortunately, as is so common with these type of events, the public officials responsible for scheduling them do little to no vetting of the performers before allowing them access to precocious, innocent kids.

“While I don’t agree with the abuse being given, my kids go to this school there was no information fed to parents about this happening. Surely that’s a parents choice? I’m happy my child is learning about LGBT but it’s overtaking the school now. Something every week,” a concerned parent told the Daily Star.

“I’m not opposed to learning about LGBT, but my 7 year old doesn’t need to know what a drag queen is and certainly not the one they had in. The headteacher is more concerned about furthering her career than tackling issuing that our school has,” they added.

“Their username is ‘flowjobqueen’ and their timeline is full of explicit images of them simulating sexual acts. Of course they’ve just just done a drag queen story reading to primary school children,” another concerned individual wrote on social media.

Even a homosexual man was concerned with the message this would send to young, impressionable children.

“Would be good to hear a response as to why an adult entertainer called Flowjob was deemed appropriate for kids? Were the vetted prior to the event? What was the content of these lessons? As a gay man with young nieces and nephews just starting school I am concerned,” he said.

FlowJob and the LGBT movement of Britain are, of course, blaming all criticism on bigotry and homophobia.

“Don’t bring your negativity to my profile. I am a drag queen yes who does adult jokes, but I also do under 18 Venus and cater around children,” FlowJob responded.

“You just know that the people pretending to be livid that a drag queen read a book in a school are also the people who run out to buy their kids the latest Grand Theft Auto on release day. Your homophobia is transparent,” wrote Renfrewshire MSP Mhairi Black in a Twitter post.

“We’re horrified to see the abusive messages and tweets targeting Glencoats Primary School for their bold and brilliant LGBT inclusive education practices. We are proud to work with their pioneering headteacher, and recognise the school as an example to others across the country,” LGBT Youth Scotland wrote on Twitter.

Around the world, drag queens have been completely unvetted before being allowed to read creepy stories about gender and sexuality to children. This has resulted in pedophiles being allowed to administer story hour events to kids. The LGBT plague will not stop until every child is violated spiritually and physically by the sadistic predators among their ranks.