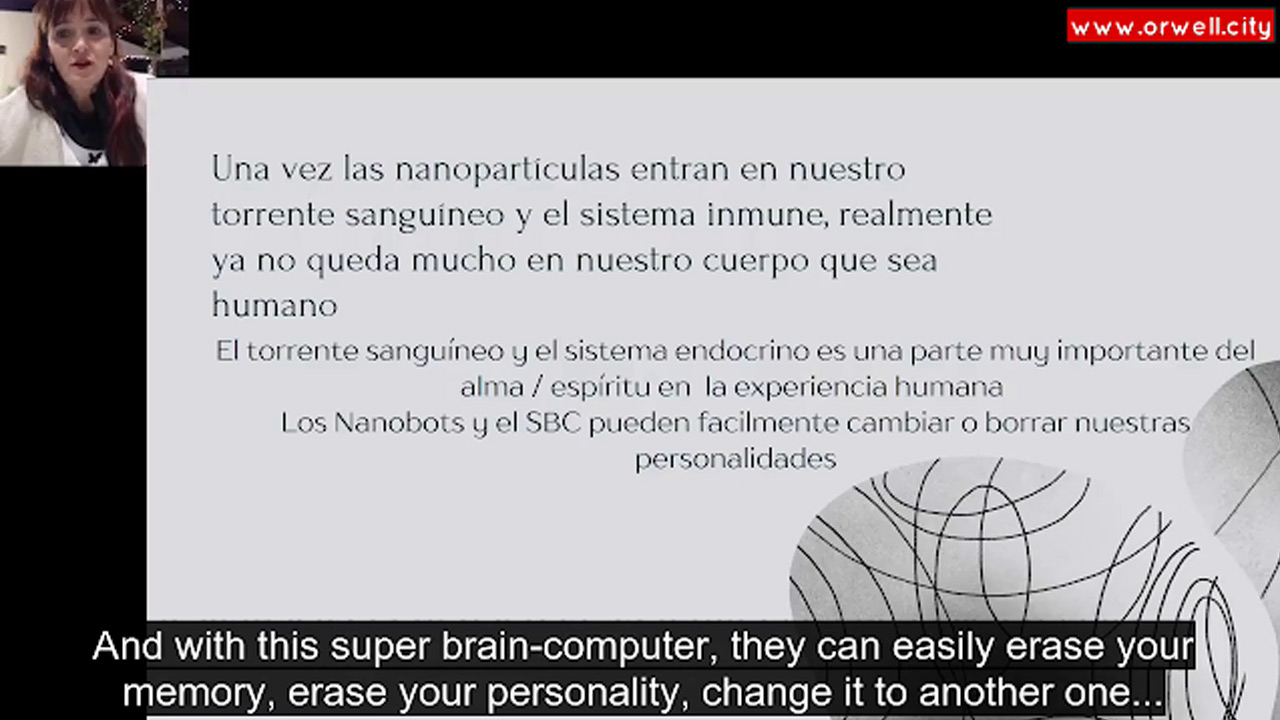 Spanish doctor Ana María Oliva, PhD. Biomedicine gave a brief presentation on the relationship between genetics, nanotechnology, and robotics as a set of elements that seek to connect the human mind to a cloud.

This technology talks about nano-receptors and nano-antennas that send and receive information. External electro-frequencies would allow not only the activation of this technology but also its modulation.

All this is in line with research carried out by La Quinta Columna and other researchers.

Dr. Ana María Oliva: So, of course, I’m saying, what they want is to generate a hybridization between machines (robots) and humans. So that all human minds are connected to a super computational brain. So that it’s an artificial intelligence.

But how are they going to do that? Well… How is that have been doing that?

To do that, we need several things.

On the one hand, we need these hybrids to be capable of auto replication. Therefore, for that, we need, guess what? We need mRNA technology that’s able to get inside the genome and, therefore, produce that replication.

Sounds familiar, doesn’t it? Huh. It does to me.

I’ve put a little picture which shows optogenetics here, see? They illustrate how an RNAm is introduced to which, at a certain moment, a specific wavelength is sent. That’s to say, radiation with a specific frequency and… Oh, curious! That RNA is then activated, and things begin to be generated.

Two very important things are necessary. The former is what’s known as “therapeutic cloning.” With it you can generate more of the tissue you need so that it can regenerate to a new one. And therefore, in some way, you can be cured of diseases. And on the other hand, this ability to be modifiable from the outside. To be controllable from the outside. So here comes a very important question, which is… Well, by now we all have a lot of all these nanobots in our bodies. Come on! It would be very naive to think that we don’t have them. Because of the number of ways that they have been introducing transgenic products, processed food, chemtrails… In short, all the injections since many years ago, some medicines… Everything is loaded. Very.

So… When do we stop being human? The moment we have 10% of nanobots? The moment we have 1% of our neurons connected and susceptible to be activated from outside? When do we stop being human? That’s a great question that was also asked this gentleman. And he went off the deep end. He never answered. He didn’t give any answer because, in the end, for them, we humans are simply like robots. Moreover, we’re very limited as machines, aren’t we? It’s important to know that once these nanoparticles… And I’m talking about nanoparticles with the same, let’s say, within the same category as these nanobots. Because in the end, we don’t even know what to call them.

Once all these systems enter our bloodstream and contact the immune system, well, there’s not much left for us to be human because they take control. The immune system is a regulatory system. So they take control. They take over the regulation, and then we’re a little bit screwed. Why? Because all hormones are transported through the bloodstream. And that the endocrine system is a very important part, as I was telling you before, in that connection between the body, soul, and spirit in our human experience.

So these nanoparticles and nanobots in combination, of course, will be self-replicating thanks to mRNA and all these things that you’ve heard of. And with this super brain-computer, they can easily erase your memory, erase your personality, change it to another one… Because as we already know, they can activate or deactivate your biology at will. And they’re also bidirectional sensors. That is, they read information and send it. And they send information and modify it. See? So, it’s very important to know that all these nanobots and these nanoantennas are transmitters and receivers simultaneously.