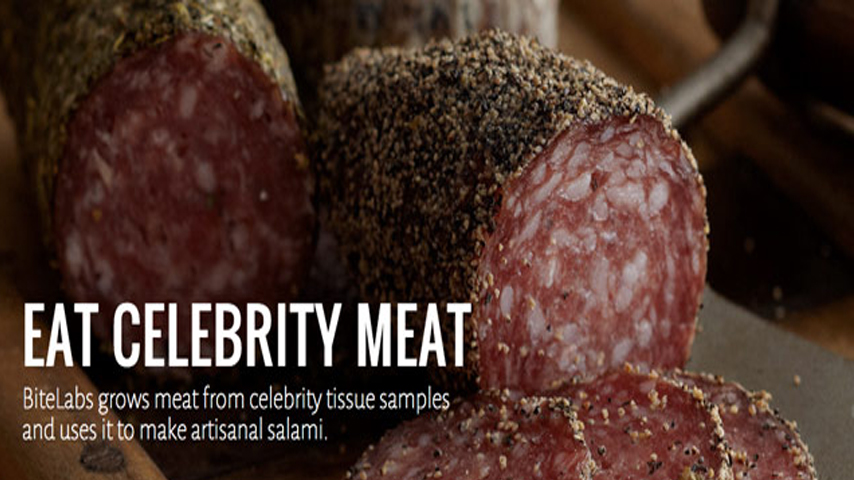 We often hear old-timers say there’s too much science and technology in our lives. In a world hijacked by profiteering food capitalists and agri-colonialists using science as a pretext, the misgivings have come true. Cannibalism has made a shocking comeback.

Here’s a deeply disturbing development that comes from California, the glorified US state that gave you your favorite social media platforms.

A company called Bite Labs offers us deliciously cooked salami made entirely from the meat of famous people. You read it right. It’s no spoof.

Meat made from the tissue samples of celebrities alive and kicking is being offered as “artisanal salami”. The company says on its website that you could choose which celeb’s meat you want to try, and if that famous personality is willing to donate their stem cells for this purpose, the company will proceed with it and deliver you salami made from their stem cells.

The company neither shares a price tag for its product nor names the famous people who have already signed up to donate stem cells for the experimental salami.

But it does mention on its website’s homepage rap star Kanye West, actor James Franco, Hunger Games icon Jennifer Lawrence, and popular host Ellen DeGeneres as four celebs who users can tag on Twitter, asking them: “Will you be my salami?”

Although there are no brand endorsements from these four celebs, it can be presumed that the company might have worked out some sort of a tie-up to be able to use their names and images to promote the controversial product.

Food capitalists nudging people around the world about the moral need to switch from real meat to “plant-based” or fake meat has already sparked widespread fears. The profiteers of the food industry are countering the critical narrative through the ages-old, tried-and-tested marketing technique. Take for example companies manufacturing plant-based or fake meat. They are signing up popular faces in sport and entertainment as brand ambassadors to promote fake meat that can only be made in factories.

But what California-based Bite Labs is offering has taken food capitalism to a new low – going from something alarming to something perverse.

The company explains the process of how it makes “artisanal” celebrity salami. “We mix celebrity and animal meats, grown in-house through a proprietary culturing process, into curated salami blends. Starting with biopsied myoblast cells, we grow our healthy, rich, meats in Bite Labs’ own bioreactors,” it says on its website.

Here is the scientific process of how the food company claims it manufactures the salami. First, when a celeb signs up for it, myosatellite cells or stem cells are collected from their body through biopsy.

The cells are placed in a “growth medium”, an artificial blood-like environment, where they multiply fast and grow into muscles. A sugar base is added to generate the texture and structure of real muscles, and the growing substance starts to develop naturally-looking veins through which the growth medium starts to flow like blood.

The expanding material is then placed inside the company’s bioreactors, which stimulate the newly-grown “muscles” to make them stronger.

When they appear fully grown, the muscle chunks are minced or pasted by a machine, and it is then mixed with other types of meat, spices, fats, and oils for flavor.

Now comes the last stage. The meat is pushed into casings and it undergoes seasoning. It is dried, aged, and treated in a low-temperature environment, and finally packaged for distribution as “artisanal celebrity salami”.

As atrocious as the perverse science behind the celeb salami is the blatant way in which the company is marketing its product.

“You’ve never experienced celebrities like this,” says a screaming headline on its official homepage. Another one says, “Help get celebrities on board.” Perhaps the most outrageous of their marketing lines is this, “Farms are dirty, and animals prone to infection; Bite Labs is a clean space where we can grow safer healthier products.”

Ever since the first Industrial Revolution, corporate empires have repeatedly misused science and technology to turn simple, indigenous and natural processes of life into ‘factory-fied’ money-spinning industries.

Profiteering from boutique cannibalism is a new feather in their cap.

Eat Bugs and Live in a Pod: South African Entrepreneur Says Caterpillars Are “A Healthier Option” Than Steak in Latest Push to Convince People to Eat Bugs