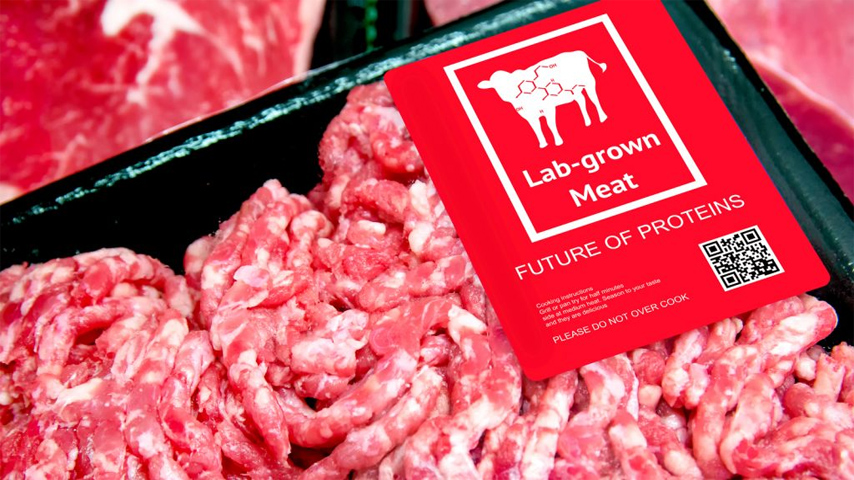 Despite being touted as a solution to the problem of factory farming, what the industry calls “cultured meat” is made with fetal bovine serum, which makes lab-grown meat expensive, non-vegetarian and unethical.

Many of the world’s elite — Bill Gates, Jeff Bezos and Richard Branson — tout lab-grown meat as the way of the future, a key solution to ending the yearly slaughter of billions of factory farm animals and to address the climate crisis.

A number of Hollywood A-listers including Leonardo DiCaprio, Robert Downey, Jr. and Ashton Kutcher have invested in lab-grown meat, or as the industry calls it, cultured meat — meat made from real animal cells grown inside a lab.

Kutcher, who invested in an Israel-based cultured meat startup, MeaTech, said the technology will support the “industrial-scale production of cultured meat, a key for a more sustainable and clean meat production.”

While these claims sound promising, there’s one big problem, said investigative journalist Tom Philpott: The cultured meat industry has a “bloody secret” that could prevent it from ever becoming a market reality.

In “The Bloody Secret Behind Lab-Grown Meat,” an article he wrote for Mother Jones, Philpott highlighted several obstacles likely to “hold back a new era of widely available animal-free burgers, nuggets, and carnitas.”

The biggest problem, Philpott said, involves the “blood of unborn cow fetuses, extracted from their mothers after slaughter.”

“Scientists have had the ability to biopsy animal cells and keep them alive outside the body since the 1950s. These test-tube cells need food to flourish, and researchers found that fetal bovine serum provided the special sauce — the right combination of hormones to make cells hum.”

Using FBS to mass-produce slaughter-free meat creates two huge problems, he said. The first is that it’s extremely expensive, selling for upwards of $1,000 per liter.

This is a “major reason why, to break even on expenses, companies would have to sell their cultured meat for about $200,000 per pound,” Philpott said, pointing to research from scientists at the University of California, Davis.

The other problem, Philpott said, is that cultured meat companies can’t market their products as “slaughter-free” or vegan when a slaughterhouse byproduct is used to grow them.

Lab-grown meat is currently available for sale only in Singapore, which in 2020 approved a form of “cultured chicken” made by San Francisco startup Eat Just.

Cell-based meat companies looking to expand outside Singapore will need to find a substitute for FBS, he said. It’s a quest that synthetic biologist Christina Agapakis said will require the creation of a whole new supply chain and “a lot of innovation in the biological manufacturing space.”

These challenges, said Philpott, could prevent cultured meat from ever being economical.

“All of which means there’s some fine print on industry claims that lab meat will be on the market within the year: Even boosters don’t expect to see price-competitive cultured meat until 2030, while other analysts conclude that the FBS-replacement problem, plus other gaping challenges — like perfecting machines that can grow cells at industrial scale — means the stuff will likely never be economical.”