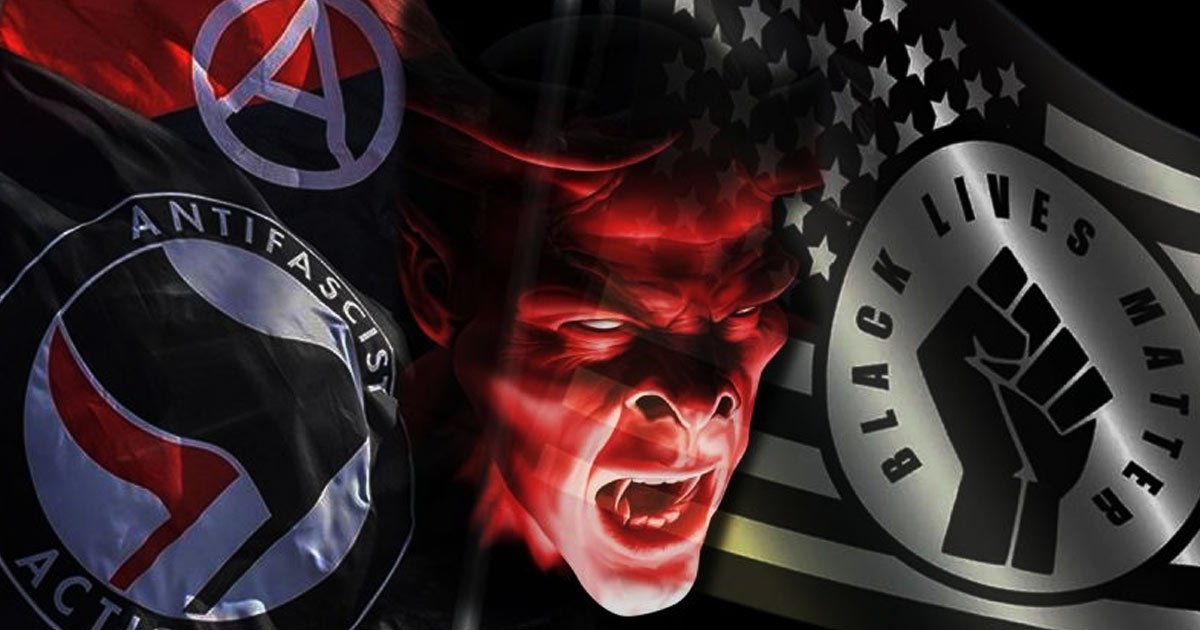 There is now proof that there are very dark forces behind Black Lives Matter, and it’s not just the blatant Marxism of its founders and leaders.

Clues about the true nature of BLM have been available for quite some time. Last month, Black Lives Matter activists terrorized church attendees in Troy, New York, while chanting “hail satan.”

They even shrieked at black families and young mothers trying to get in the building. Just this week in Kenosha, Wisconsin, a church with a “Black Lives Matter” sign on it was torched by BLM activists.

In a video that went viral this week, a mob of white BLM activists shout at a couple at a D.C. restaurant for refusing to raise their fists, with one activist asking the confused victims, “Are you a Christian?”

Now, newly released audio recordings reveal the occult practices, ancestor worship, African paganism, and literal witchcraft of at least one of the national group’s co-founders, as well as the founder of BLM’s Los Angeles chapter.

Apparently the entire George Soros-funded leadership of BLM is involved in these practices as well.

In the audio, BLM co-founder Patrice Cullors, who boasted in a TV interview of being a “trained Marxist,” revealed that she is also consulting spiritual entities and allowing them to “work through” her.

“I’m calling for spirituality to be deeply radical,” she said. “We’re not just having a social justice movement, this is a spiritual movement.”

Of course, Christians, pointing to Ephesians 6:12 and its reference to spiritual warfare, have been making this argument since the fruit of BLM became more clear: destruction, hate, looting, burning, Marxism, division, riots, and more.

But until recently, the spiritual nature of the struggle was simply inferred and deduced from the Bible and the news. Now, the proof is available to all.

In a recorded conversation with Cullors, BLM Los Angeles founder and California State University Professor of “African Studies” Melina Abdulla reveals more than she thought she should have.

“Maybe I’m sharing too much, but we’ve become very intimate with the spirits that we call on regularly, right.” she explained.

“Like, each of them seems to have a different presence and personality, you know. I laugh a lot with Wakisha, you know. And I didn’t meet her in her body, right, I met her through this work.”

Cullors echoes the sentiments of Abdulla.

“It’s a very important practice, um, hashtags are for us, are way more than a hashtag, it is, um, literally almost resurrecting a spirit so they can work through us to get the work that we need to get done,” said Cullors, one of the three founders of BLM.

“I started to feel personally connected and responsible and accountable to them, both from a deeply political place, but also from a deeply spiritual place.”

“Always, you know, in my tradition you offer things that that your loved one who passed away would want, you know, whether it’s like honey or tobacco, things like that,” the trained Marxist and BLM co-founder continued.

“And that’s so important, not just for us to be in direct relationship to our people who’ve passed, but also for them to know we’ve remembered them. Um, I believe so many of them work through us.”

Cullors also admits that the very first thing BLM leaders do when they hear of a “murder” is to pray to the spirits and “pour libation.”

Again, she emphasized, this is not just about “racial and social justice.”

“At its core, it’s a spiritual movement,” she continued. “You can’t pretend like that work is just organizing work. That’s, you know, that’s some serious stuff.”

The whole “say his name” mantra also has deep spiritual significance, according to Cullors.

“When we say the names, right, so we speak their names, we say her name, say their names, we do that all the time that, you kind of invoke that spirit, and then those spirits actually become present with you,” she explained, revealing something that virtually none of the “useful idiots” attending BLM rallies understand.

“Spirituality is at the center of Black Lives Matter, and I think that’s not just for us, I feel like so many, um, leaders and so many organizers, um, are deeply engaged and in a pretty, um, important spiritual practice,” Cullors continued.

His conclusion is that the conversation proves top BLM leaders are involved in witchcraft, “summoning the spirits of the dead,” and engaging in other satanic practices that are firmly condemned and strictly prohibited in the Bible.

The use of pepper spray by police against protesters in Charlotte last week was the first of several times law enforcement officers used the irritant for crowd control last week after some protesters had turned violent.

Activists who took part in the protests say they weren’t the violent ones.

While some of those who have been criminally charged by police are accused of assaulting officers, videos from that afternoon and night that were aired on the mainstream media show several people targeted or injured by pepper spray while not engaged in violence.

The same mainstream media failed to report the rise of satanism in the ranks of BLM.

This protest was a week ago but was ignored by the liberal media.

This is an attack born in blind hatred, fed by Antifa and BLM radicals, sponsored by corporate donors, abetted by biased reporting of anti-police media.

Please share this article wherever you can. It is the only way we can work around their censorship and ensure people receive news about issues that Democrats and the mainstream media suppress.

A Company plans to dig the world’s deepest hole to unleash boundless energy!