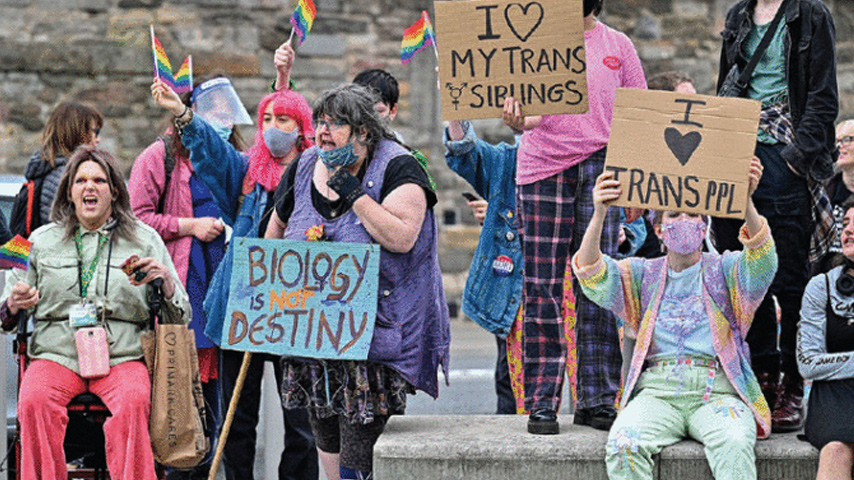 The Scottish Government is attempting to distance itself from a shocking document offering offensive advice to civil servants.

Among other things, Scottish civil servants were told that biological sex is a “falsehood” that was invented by the establishment to “reinforce white supremacy and gender oppression”.

According to the Telegraph, the Scottish Government’s taxpayer-funded LGBTI+ internal staff network was allowed to carry out its Trans 101’ course for civil servants and promoted what critics described as “highly political and discriminatory material”

The course, aimed at giving civil servants an insight into transgender policies and global rights, pointed them to a “trans language primer” which is claimed to be in use by many US universities and other organizations.

“TERFs are transphobes loosely organised into a trans hate group” who have an “obsession with trans people in sports”, the primer asserts.

“While they hate all trans people, they attack trans women especially aggressively as trans woman challenge TERFs’ view of biological essentialism around the identity and experience of womanhood,” it accuses, further alleging that TERFs have an “unhealthy fascination with trans kids and work especially hard to make the lives of trans kids miserable”.

In addition to dismissing biological sex as a “falsehood” invented to “reinforce white supremacy” in some ill-defined way, the training took issue with the “outdated” terms biological men and biological women, and even male-bodied and female-bodied.

This statement seems to be a direct shot across the bows at people like Harry Potter author JK Rowling, who has previously mocked the idea that a “penised individual” who perpetrates a rape should be regarded as “a woman”.

Commenting on the training, Susan Smith of the For Women Scotland organization — which might be described as a FART group by the trainers — asked how women could trust that “civil servants, potentially including those drafting legislation like gender recognition reform, have any care for our rights when they are being trained to call us offensive names and told we are hate groups?”

Smith also suggested that the training was unlawful due to its politically and ideologically biased nature: “Perhaps the Scottish Government think they are above the Equality Act and other laws on discrimination in the workplace — they are not,” she said.

However, Britain’s Conservative-led central government in London has until now proved reluctant to do anything about such apparent indoctrination in the public sector other than talk about it, if that.