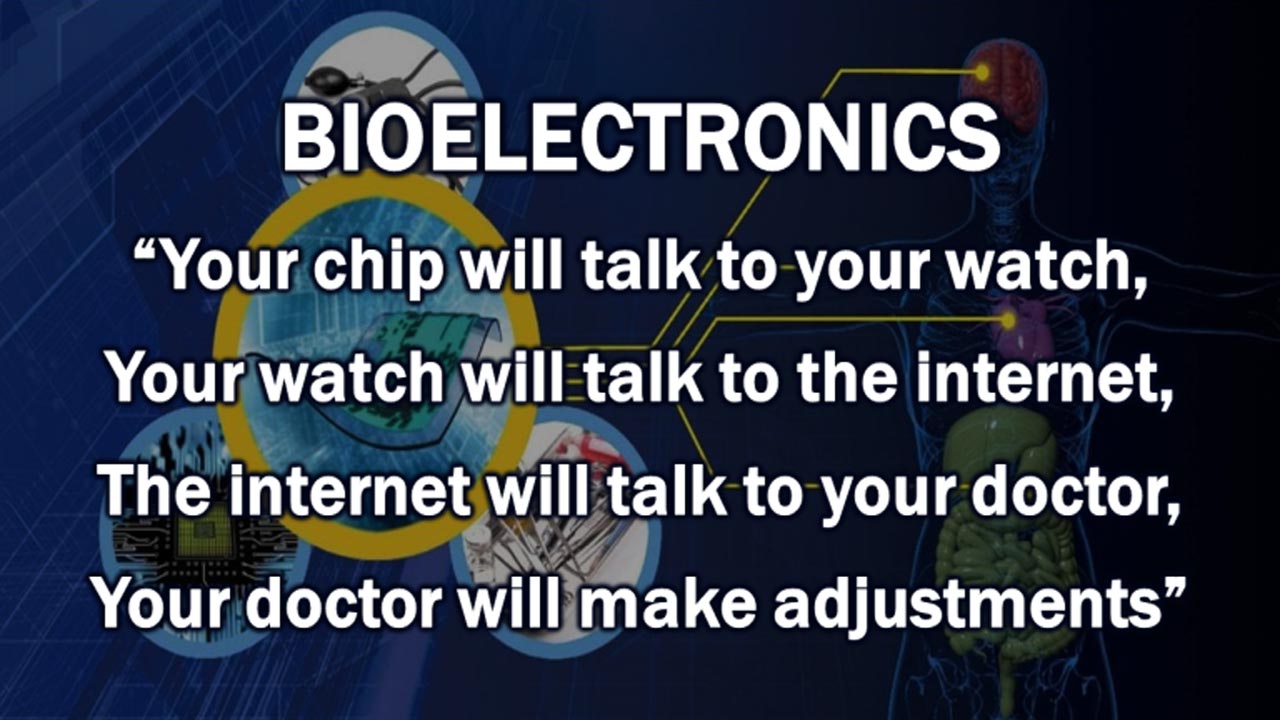 Bioelectronics is the convergence of biology and electronics. Biological activity can be measured and even harnessed using bioelectronic devices, with key applications in areas such as healthcare monitoring and disease treatment.  But bioelectronics reaches well beyond biomedicine.

In the description beneath a 2014 promotional video, The Future of Medicine states: “GSK believes that these [bioelectronic] devices could be programmed to read and correct the electrical signals that pass along the nerves of the body.”

They claim bioelectronics will transform the future of medicine – for our health.  But is it?

Francis Collins will be stepping down as director of the US National Institutes of Health (“NIH”) at the end of this year after more than 12 years leading the agency.  He is the former head of the Human Genome Project.

Collins announced he was stepping down from his NIH role at the beginning of October “following a number of investigative reports into Collins and his underlings,” The National Pulse reported. One such investigation was that Collins served on the advisory board of a conference sponsored by a Chinese military-linked genomics firm – BGI Genomics – that had been flagged by US intelligence officials for its robust efforts to “collect, store and exploit biometric information” on American citizens through Covid test kits.

Two weeks later an NIH official corrected untruthful assertions made by Collins and Anthony Fauci that NIH had not funded gain-of-function research in Wuhan.  Despite this revelation, in an interview with Nature last week Collins defended EcoHealth Alliance’s gain-of-function research on coronaviruses. “This term ‘gain-of-function’ has caused so much confusion and so much misunderstanding, some of it rather intentional, to distort the facts of what happened. This is why we’re trying to just avoid the use of that term. Let’s talk instead about ‘enhanced pathogens of pandemic potential. [EcoHealth was] not crossing the line into the area that required that extensive kind of oversight,” Collins said.

When asked about the role NIH had in “pushing back against misinformation about science,” Collins responded: “This has turned out to be a much more severe situation than I would have imagined a year ago. I wish we had more insights from behavioral social science research into how this has come to pass, and why it could have gotten so completely widespread. I want to call this out as one of my most major concerns.”

Only those who are being untruthful will find open debate a “most major concern.”

Moncef Slaoui was chief science adviser to Operation Warp Speed, and as such “is a key figure in the federal government’s aggressive Covid-19 vaccine development and distribution program. Slaoui previously spent 30 years as the head of GlaxoSmithKline’s vaccines department,” the Washington Post stated on 1 December 2020

In March 2021, Slaoui was dismissed “effective immediately” as Chair of the Galvani Board of Directors by GSK – the majority shareholder of Galvani Bioelectronics (“Galvani”).  The other partner in Galvani is Verily Life Sciences (formerly Google Life Sciences), a subsidiary of Alphabet Inc.  Slaoui’s dismissal was after an independent investigation that found he sexually harassed one of its female employees.

Kevin Tracey is a neurosurgeon and president and CEO of the Feinstein Institutes for Medical Research, the science arm of Northwell Health – New York’s largest health care system. He helped create the Institute for Bioelectronic Medicine which New York State gifted with a $30 million grant in 2020. The Institute is “working to develop devices to control the electrical signal used by the nervous system.”

In the video clip below Tracey demonstrates how bioelectronic implants are used.

The Aspen Institute summarised the 2015 discussion between LaPook, Collins, Slaoui, and Tracey as follows:

“Biology and electronics are converging to create a new generation of therapies with so much potential that some wonder if they will eventually replace pharmaceuticals altogether. Bioelectronic medicine could offer a pathway to treat diabetes, hypertension, asthma, rheumatoid arthritis, and perhaps even cancer and the common cold. Building on new knowledge of how nerve cells and immune cells communicate, some especially exciting experiments stimulate the vagus nerve in order to tame the inflammatory response implicated in many diseases. If bioelectronic devices can be remotely controlled, is there a risk of “body hacking”? And could the drug industry truly be headed for extinction?”

Notable points, with timestamps from the video that follows, are listed below:

During a 2018 speech in Davos, Matt Hancock, the former UK Health Secretary, said: “Now the task is the next generation of emerging technologies, like the Internet of Things, artificial intelligence and Blockchain. You could call it the fourth industrial revolution for Government …”

According to the UK government, The Fourth Industrial Revolution “is characterized by a fusion of technologies – such as artificial intelligence, gene editing, and advanced robotics.”  Although the word “transhumanism” is not used on this particular page, the term “human augmentation” is used elsewhere on the UK government’s website.

“[The Dawn of a New Paradigm Strategic Implications Project] incorporates research … to understand how emerging technologies such as genetic engineering, bioinformatics and the possibility of brain-computer interfaces could affect the future of society, security and Defence.

“There are mature technologies that could be integrated today with manageable policy considerations, such as personalised nutrition, wearables and exoskeletons. There are other technologies in the future with promises of bigger potential such as genetic engineering and brain-computer interfaces.”

It would seem bioelectronics is transhumanism that characterizes the Fourth Industrial Revolution.  It will, of course, be sold to us as biomedicine, for our health. But who will be controlling the signals and to whose benefit?  And how convenient it would be for its proponents to rush experimental biosensors and bioelectronic devices onto a population who have been injured by the experimental Covid injections.