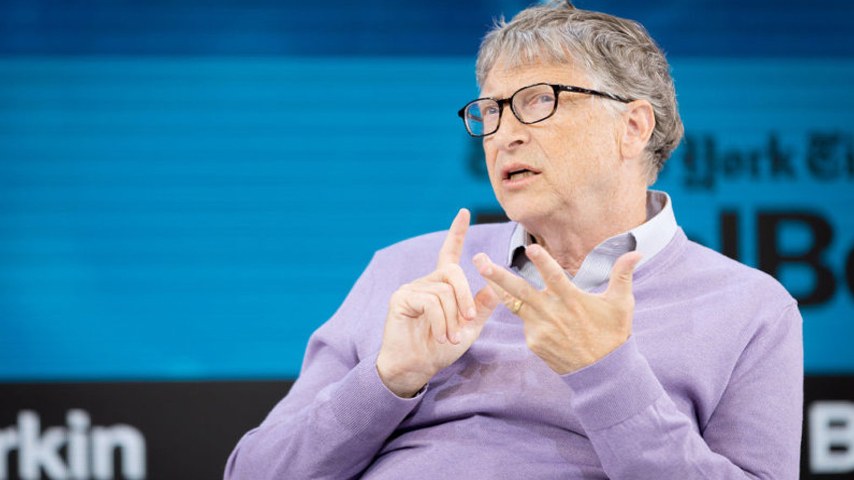 Oh great. Bill Gates has another idea. We thought he had gone into hiding since his divorce or that he’d been advised to keep a low profile. He hasn’t said much since that squirmy interview last summer when he admitted to “several dinners” with his pedophile pal Jeffrey Epstein.

“Well, he’s dead,” Gates said glibly of the child trafficker who died in a prison cell awaiting trial. He was only talking to Epstein (reportedly on Epstein’s private plane, the “Lolita Express”) to get billions for “philanthropy,” he explained. Oh yeah, and for advice about his “toxic” marriage to Melinda.

Maybe she’s lucky to have made it out alive — and with $60 billion — but you’ve got to wonder how long ago she figured out he’s not what she thought he was.

But Bill is back. And unapologetic as ever.

He told a TED audience in Vancouver this month that he had been thinking about Emperor Augustus and how he established the first permanent fire brigade, a team to be ready to put out fires as they happened. Just so, the world needs a permanent, tax-funded $1-billion-a-year global pandemic fire brigade, said Gates, to stomp out viruses as they emerge.

He called it a Global Epidemic Response and Mobilization team (“GERM” for short) and described how its members would be stationed at Centers for Disease Control and Prevention (CDC) offices throughout the globe and parachute into hot zones, just like in the movies. In fact, Bill showed a clip from a 1990s-type outbreak film with men in orange hazmat suits jumping out of a helicopter somewhere to investigate dead bodies. Although obviously, there are the CDC, the World Health Organization, and a massive global network of agencies and offices that already exist to do this job and which executed the COVID lockdowns and extended COVID theater globally, Gates said we don’t have this kind of drama team yet, and we should have it.

Bill’s GERM people sound more like a permanent pandemic police force. He even referenced Australia, which became a draconian island prison of mandates, forced quarantines and police brutality, as his model of COVID success. It’s not, as this video comparing COVID deaths in the lockdown capital of the world before Shanghai to unvaccinated Niger illustrates.


Never mind. Since GERM is his idea — or at least he is taking credit for it — Gates seemed to be likening himself to Emperor Augustus. It’s not the first time he’s revealed his emperor complex.

For a non-scientist with no medical degree — a college dropout, in fact — he sure does have a lot of interest in running everything. He’s spent a lot of his money (and ours, via channeling tax funds to his ideas like GERM) buying influence in every arena he takes a fancy to control — from agriculture and education, to “family planning” and how many children people in Africa should have, to fake food, weather control, tropical disease, technology, media,  public health, and many more, not least of all, vaccines.

Vaccines, which he boasted also give him a whopping 20:1 return on investment, are a big interest for Dr. Bill Gates (who went to the same medical school as most of the rest of us). He wields incredible power over global health as the second biggest funder of the WHO, who also underwrites universities, foundations, and research in whatever happens to grab his wandering interest, leaching money along the way from taxpayers across the globe to run Gavi, the global Vaccine Alliance, and lots and lots of little health NGOs that carry out the myriad tasks on his emperor wish list.

Still, not everything has gone precisely to plan.

Remember how Gates was pushing COVID vaccines before they were even invented? He said they were our ticket back to “normal,” and we would all have digital passports when we got them. And remember how the media howled when “anti-vaxxers” and “conspiracy theorists” objected to being tracked and traced and said that warp speed COVID vaccines wouldn’t stop infections or work against variants?

Well, Gates conceded to the TED crowd that the COVID shots don’t really work that well.

“We need vaccines that actually block infections,” he said. (That would have been a good idea.) “In this case, there were lots of breakthrough infections.”

Lots and lots of them. As in, prepare to get COVID even if you were vaccinated four times.

“We need vaccines that are broad-spectrum, so they work against most of the emerging variants, which we did not have this time,” he added.

Nope. We didn’t. This is why people who listen to Bill Gates are taking their fifth “booster” dose now, even though that doesn’t work any better than the original shots.

Never mind. When you are a woke genius as Gates is, you don’t apologize when you push ideas that fail. You simply don’t mention the 27,000 reported deaths from your COVID shots and the hundreds of thousands of other people afflicted with disease and disability as side effects. You just repeat the original preposterous claim without any scientific basis and add a modifier. Like this:

“When we look at vaccines, they were the miracle of this epidemic. They saved millions of lives,” Gates said, “but they can be far better.”

It’s like the people who say, “I have COVID and I’m really, really, sick – I’m so sick I can hardly breathe. Thank God I got the shots!”

But you don’t need hard evidence when you are Bill Gates. Or humility.

He told the TED crowd that he predicted a pandemic at a TED2015 event but that 90% of the views on his talk came “after it was too late.” If only we had listened to him then, everything would be so much better.

Notwithstanding the mainstream media’s fawning interviews (listen to the lady at TED gush),  everything Gates touches does not turn to gold. In fact, he’s a  sort of anti-Midas – everything he touches becomes fly-covered sludge.

One philanthropy disaster after another

The Los Angeles Times wrote in 2007 about the “dark cloud” over Gates’s good deeds, cast by the conflicts of his massive investments in big corporations whose practices were killing and maiming people, including children, in the poorest countries where he was profiting from his philanthropy.

Later, he had big ideas about transforming America’s public schools (though he and his kids went to private schools, of course.) He told a Harvard University interviewer in 2013 that he wouldn’t know for “probably a decade” if his “education stuff” worked. It took only three years before it was obvious his stuff was a dismal failure. School boards were left footing the bill for his big ideas, and Bill walked out on the payments when the program capsized. Oops. Never mind.

Same with his agricultural reforms. When he and Melinda partnered with the Rockefeller Foundation in the $424 million Alliance for a Green Revolution in Africa (AGRA) to increase food productivity and incomes, they forced local farmers to abandon their traditional techniques, and instead use imported commercial seeds, petroleum fertilizers and pesticides while Gates pressured African governments to massively fund his whims and penalize farmers who wouldn’t comply.

Just like the Gates-funded initiatives to test contraceptives on women and to reduce fertility in poor nations while reaping profits from drug companies who make birth control – all under the language of improving women’s options, of course.

Polio is not gone

There is a big virus in Bill’s polio eradication program, too. He boasts about it in one of his recent blogs. “Thanks to investments made by governments, the private sector, and philanthropy, wild polio cases are at a historic low, and the disease is endemic in just two countries: Pakistan and Afghanistan.”

Notice he said “wild polio” is just about gone. That’s because something called “circulating vaccine-derived poliovirus” (cVDP) has flourished in place of wild polio. That’s right – it’s a disease that looks and paralyzes just like original polio but it’s called “vaccine-derived” because it comes from the oral polio vaccine that was canceled by the West for causing the disease it is meant to prevent but is proffered all over poor nations by technocrats like Bill Gates (and Pope Francis). It’s flourishing. There were outbreaks of cVDP in 25 countries last year, including Nigeria, the Democratic Republic of the Congo (DRC), Malawi and Israel last month. They occur in vaccinated and unvaccinated children, caused by the virus in the vial that sheds from inoculated children. The answer of technocrats to the failure of their polio vaccines: vaccinate more. Sound familiar?

It also happens that in India, where Bill Gates claims polio has been wiped out because of his interventions, there are tens of thousands of cases of non-polio acute flaccid paralysis (NPAFP) which doctors describe as “clinically indistinguishable from polio paralysis but twice as deadly” and which they report the incidence of is “directly proportional to doses of oral polio received.”  When vaccination stops, the non-polio polio incidence drops. Thanks Bill.

Never mind his kooky ideas of blocking out the sun to cool global warming or his inhalable vaccines.  Do you see the pattern of Emperor Bill here? So enamored with his own genius, so surrounded by sycophants,  so psychopathic that he doesn’t see the stupidity of his big ideas or the tidal wave of injury in their wake. Unless, of course, he intends it.

Bill said he hasn’t got someone to put forward his big GERM idea yet at the WHO. You can bet he’s lying, and all his toadies are in line to secure the “global consensus” for his GERM police force and its funding by the “rich countries” (which means you and me), too.

Will we have to suffer through this next stupid idea from this unelected self-declared genius with an emperor complex, too? And not just pay for it with our tax dollars but, as always, with lives, with health, with freedom, and with human dignity? How long before you break his teeth, Lord? How long?

How To Protect Yourself From Long Term Pandemic Lockdown