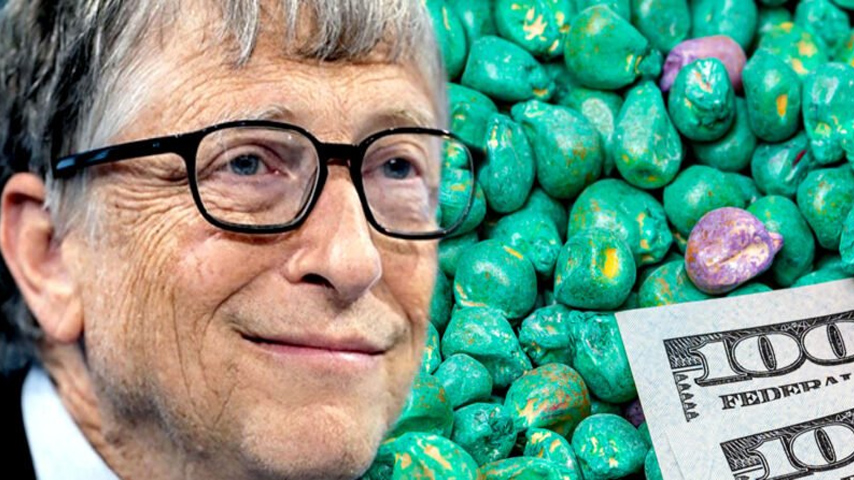 Bill Gates is rebranding genetically engineered seeds as “magic seeds” and says they’re the answer to world hunger, but according to Vandana Shiva, Ph.D., a “failed, clumsy crude manipulation of living systems does not create ‘magical seeds.’ It creates an ecological disaster.”

Bill Gates said he believes the global community must invest in engineered crops using what he calls his “magic seeds” to solve world hunger.

What is needed, he said, are “magic” seeds that have been genetically engineered to be resistant to hot and dry climates or to grow three weeks faster than natural seeds.

“Temperature keeps going up,” Gates said. “There is no way, without innovation, to come even close to feeding Africa. I mean, it just doesn’t work.”

“This is patently false and an example of spin doctoring by public relations companies to rebrand products that are widely regarded as Frankenfoods,” Leu told The Defender.

According to Vandana Shiva, Ph.D., environmental activist, author and founder of Navdanya International, “[Natural] seeds as the source of life are magical. They hold their implicate order within them, and unfold to relocate the unique patterns and structures of life in its diversity.”

In contrast, Shiva said, “Genetically engineered seeds have been made to own life through patents.”

“A failed, clumsy, crude manipulation of living systems does not create ‘magical seeds.’

“It creates an ecological disaster of monocultures of GMOs [genetically modified organisms] displacing the rich diversity of crops that we need for the health of people and the health of the planet.”

According to Gates, he’s concerned about the planet — at least how it may be impacted by climate change.

The BMGF on Sept. 6 released an “Agriculture Adaptation Atlas” that uses predictive modeling to estimate how climate change may affect growing conditions for crops in African countries.

The BMGF is also promoting the use of artificial intelligence (AI) that processes the genome sequences of crops along with this environmental data to conjure up a data-based vision of what farms should look like in the future.

“From this computer model, researchers can identify the optimal plant variety for a particular place,” Cambria Finegold, director of digital development for CABI, an intergovernmental organization that is developing models for the BMGF, earlier this month told The Associated Press (AP). “Or they can do the reverse: pinpoint the optimal place to grow a specific crop.”

“It’s not just, ‘how do we get through this crisis and get back to normal?’ It’s, ‘what does the future normal look like?’”

But critics pointed out that this reliance on AI and genetically modified seeds would exacerbate environmental issues because the modified seeds require heavy use of fossil-fuel fertilizers, which must be transported across great distances, and pesticides that threaten biodiversity.

According to Alliance for Food Sovereignty in Africa and AGRA Watch, a group that “works with partner organizations in Africa and the US to support sustainable, agroecological, socially responsible, and indigenous alternatives,” the BMGF’s industrial agricultural programs in Africa, including its Alliance for a Green Revolution in Africa (AGRA), cause biodiversity loss, hurt small-scale farmers and cause environmental harm — all while failing to solve hunger.

Rachel Bezner Kerr, a professor of global development at Cornell University, told the AP there are existing alternatives — such as locally managed seed banks, composting systems that promote healthy soil and non-chemical pesticide interventions — that can build more resilient farming systems and reduce the need for food aid.

Kerr, a lead author of the food chapter of the latest report from the United Nation’s Intergovernmental Panel on Climate Change, said that although the panel doesn’t make recommendations, “overall, the kind of focus on a few technologies and reliance on fossil fuel-based inputs isn’t in line with ecosystem-based adaptation” or a biodiverse future.

However, BMGF CEO Mark Suzman contended fertilizer is necessary. “You simply cannot meet overall productivity gains without it,” he said on a call with reporters, according to the AP.

“If there’s some non-innovation solution, you know, like singing ‘Kumbaya,’ I’ll put money behind it,” Gates told the AP in an interview. “But if you don’t have those seeds, the numbers just don’t work.”

Gates said, “When researchers in Kenya compared plots of this new [genetically modified] maize, which they called ‘DroughtTEGO®,’ with the old one, they saw the DroughtTEGO farms were producing an average of 66% more grain per acre.”

“To end world hunger we must stop treating food as a commodity and seeds as corporate ‘intellectual property,’” she told The Defender.

“To solve world hunger every farm must become biodiverse and ecological. Biodiversity intensification produces more nutrition per acre, with no dependence on external inputs of seeds and toxic agrochemicals as our report ‘Health Per Acre’ shows.”

“We can feed the people while regenerating the biodiversity of the planet,” Shiva said.

Leu agreed. “The scaling up of regenerative organic agriculture based on the science of agroecology would easily solve the global food insecurity crisis. It is low-cost, proven, and effective, and scaling it up globally would be less than the cost of developing one GMO crop.”

“Despite more than 40 years of hype that GMO seeds were going to dramatically increase yields, solve pest and disease problems, reduce pesticide use, drought-proof crops, allow them to be grown in saline soils, and numerous other extravagant claims, this has not been achieved.

“The research by independent scientists — not by the scientists employed by the biotech companies who have an obvious conflict of interest — clearly shows that there have been no yield increases over conventional breeding.

“The only two things GMO crops have succeeded in doing are dramatically increasing the use of toxic pesticides such as glyphosate (Roundup) in our food, bodies, and environment and the profits of the large agribusiness pesticide companies.”

“The majority of food-insecure people are smallholder family farmers and others who depend on them in rural communities,” he said.

“We have proven many times that teaching good organic farming practices can increase their yields by over 100% so they can feed their families and local communities. They also get an income to pay for healthcare, education and many other things that are important for a good quality of life.”

Who really suffers and who profits from ‘philanthrocapitalism based on biopiracy’?

The BMGF and the Gates-led AGRA say they aim to transform agriculture in Africa by increasing incomes and food security for millions of smallholder farmers.

On July 13, Gates pledged to donate $20 billion to the BMGF so it can increase its annual spending to “mitigate some of the suffering people are facing right now.” The donation brought the foundation’s endowment up to $70 billion, CNBC reported in July.

The BMGF has spent $1.5 billion on grants focused on agriculture in Africa, according to Candid, a nonprofit that researches philanthropic giving.

But an independent evaluation of AGRA’s efforts, released in late February by the consulting firm Mathematica, found “mixed” outcomes on inclusive financial, output markets and farmer outcomes, The Defender reported.

According to Joeva Rock, Ph.D., assistant professor of development studies at the University of Cambridge who wrote a not-yet-released book about food sovereignty in Ghana, activists in Africa questioned whether the funds could have been better spent elsewhere.

“What would happen if those went into increasing funds to the national research centers in Ghana, to building roads, to building storage, to building silos or helping to build markets?” Rock said.

Food insecurity is not caused by low yields, Leu told The Defender. “It is caused by unfair and inefficient food distribution systems.”

“Industrial farming systems are not designed to feed the poor. The COVID-19  pandemic lockdowns and war in Ukraine are examples of why it is the wrong model.

“Growing food thousands of miles away from where it is needed instead of growing it locally is the problem. People are dependent on supply chains that can easily be disrupted.

“Also, food-insecure people are the poorest on the planet. Even if the food gets to their country, they can’t afford to buy it.

“On the other hand, we now have an obesity epidemic in the more affluent countries and regions due to an oversupply of calories empty of nutrition from industrial agriculture.”

In 2006, the BMGF joined with the Rockefeller Foundation to spur a “green revolution” in Africa by creating AGRA.

“Over the long term, the partnership, called Alliance for a Green Revolution in Africa (AGRA), intends to improve agricultural development in Africa by addressing both farming and relevant economic issues, including soil fertility and irrigation, farmer management practices, and farmer access to markets and financing,” the groups said.

At its inception, AGRA declared Africa deficient in what it referred to as “improved inputs,” such as fertilizer and “advanced” seeds, and has worked to implement policies that would make African farmers use manufactured fertilizers, pesticides and engineered seeds — which are all patented products that generate profits for their owners.

Although the BMGF and AGRA claim to be “pro-poor” and “pro-environment,” their alignment with transnational corporations such as Monsanto, and foreign policy groups such as the U.S. Agency for International Development (USAID), makes their motives suspect, according to AGRA Watch:

“[BMGF] takes advantage of food and global climate crises to promote high-tech, market-based, industrial agriculture and generate profits for corporations even while degrading the environment and disempowering farmers.”

A three-part video series “Rich Appetites: How Big Philanthropy Is Shaping the Future of Food in Africa” explains why exporting the U.S. agribusiness model to Africa is a “grave mistake” and exposes how “Big Philanthropy” — namely the BMGF — is destroying farming and food in Africa by seizing control from local interests.

Crushed Bug ‘Additive’ is Now Included in Pizza, Pasta & Cereals Across the EU