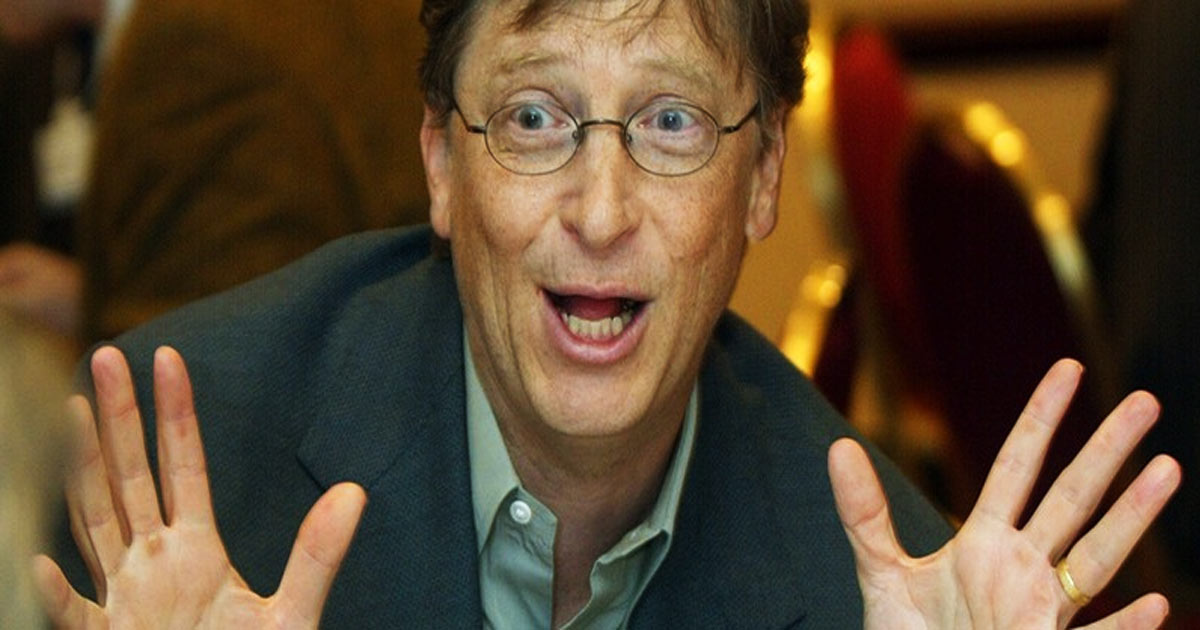 In a recent candid interview, Bill Gates outlined that, despite the comparatively small threat of Coronavirus, he and his colleagues “don’t want a lot of recovered people” who have acquired natural immunity. They instead are hoping we become reliant on vaccines and anti-viral medication.

Shockingly, Gates also suggests people be made to have a digital ID showing their vaccination status, and that people without this “digital immunity proof” would not be allowed to travel. Such an approach would mean very big money for vaccine producers.

Did Bill Gates Just Reveal the Reason Behind the Lock-Downs?


On March 24 Bill Gates gave a highly revelatory 50-minute interview (above) to Chris Anderson. Anderson is the Curator of TED, the non-profit that runs the TED Talks…At 33:45, Gates drops this bomb:

We don’t want to have a lot of recovered people […] To be clear, we’re trying – through the shut-down in the United States – to not get to one percent of the population infected. We’re well below that today, but with exponentiation, you could get past that three million [people or approximately one percent of the U.S. population being infected with COVID-19 and the vast majority recovering]. I believe we will be able to avoid that with having this economic pain.”

It appears that rather than let the population be exposed to the virus and most develop antibodies that give them natural, long-lasting immunity to COVID-19, Gates, and his colleagues far prefer to create a vast, hugely expensive, new system of manufacturing and selling billions of test kits, and in parallel very quickly developing and selling billions of antivirals and vaccines. And then, when the virus comes back again a few months later and most of the population is unexposed and therefore vulnerable, selling billions of more test kits and medical interventions. Right after that, at 34:14, Gates talked about how he sees things rolling out from there.

Eventually what we’ll have to have is certificates of who’s a recovered person, who’s a vaccinated person […] Because you don’t want people moving around the world where you’ll have some countries that won’t have it under control, sadly. You don’t want to completely block off the ability for people to go there and come back and move around. So eventually there will be this digital immunity proof that will help facilitate the global reopening up.”

[Sometimes on the afternoon of March 31 the last sentence of this quote was edited out of the official TED video of the interview. Fortunately, recordings of the complete interview are archived elsewhere.]In the October 2019 Event 201 novel-corona virus-pandemic simulation co-sponsored by the Bill & Melinda Gates Foundation, the World Economic Forum and a division of the Johns Hopkins Bloomberg School of Public Health, a poll that was part of the simulation said that 65% of people in the U.S. would be eager to take a vaccine for COVID-19, “even if it’s experimental.”This will be tremendously lucrative. Vaccines are very big business: this Feb. 23 CNBC article, for example, describes the vaccine market as six times bigger than it was 20 years ago, at more than $35 billion annually today, and providing a $44 return for every $1 invested in the world’s 94 lowest-income countries. Notably, the Bill & Melinda Gates Foundation – which has an endowment of $52 billion – has given more than $2.4 billion to the World Health Organization (WHO) since 2000, according to a 2017 Politico article. (While over the same time frame countries have reduced their contributions to the world body, particularly after the 2008-2009 depression, and now account for less than one-quarter of the WHO’s budget.) The WHO is now coordinating approximately 50 groups around the world that are working on candidate vaccines against COVID-19. The Politico article quotes a Geneva-based NGO representative as saying Gates is “treated liked a head of state, not only at the WHO but also at the G20,” and that Gates is one of the most influential people in global health. Meanwhile, officials around the world are doing their part to make sure everyone social distances, self-isolates, and/or stays locked down. For example, here’s Toronto’s Medical Officer of Health, Dr. Eileen de Villa, at her and Toronto Mayor John Tory’s March 30 press briefing:

“We find ourselves in the midst of a global pandemic. We should expect some more people will get sick – and for some, sadly, will die. This is why it is so important to stay at home to reduce virus spread. And to protect front-line workers, healthcare workers and our essential workers, so they can continue to protect us. People shouldn’t have to die, people shouldn’t have to risk death taking care of us because others won’t practice social distancing or physical distancing.”

Yet look how close Ontario’s Chief Medical Officer of Health, Dr. David Williams, is sitting to Haley Chazan, Senior Manager, Media Relations, for Christine Elliott, Deputy Premier and Minister of Health of Ontario. This was on Friday, March 27, just before the start of that day’s daily press conference by Dr. Williams and Ontario’s Associate Medical Officer of Health Dr. Barbara Yaffe: They were sitting two seats, or just a couple of feet, apart. A short time later Chazan got up and stood even closer to Dr. Williams for a little while: Dr. Williams and Chazan do not live together. Rather, Dr. Williams very likely knows – just as Gates knows – that there is little if any reason to worry about being in close contact with other people unless you or they are vulnerable to developing a severe illness from COVID-19. He surely knows, also, that if you contract COVID-19 and you’re otherwise healthy you’ll very likely have few symptoms, if any, and recover quickly. And that this exposure in fact is beneficial because in the process you will develop antibodies to the virus and have natural, long-lasting immunity to it. Yet in the March 27 press conference, just like all the others he has participated in during the COVID-19 crisis, Dr. Williams lectured the public about maintaining social distancing. He told people not to go outside on the coming weekend to enjoy the nice weather because, otherwise, they might walk past someone and not be two meters apart. Dr. Williams is among the large cadre of powerful officials who’ve crashed the global economy by forcing tens of millions of small- and medium-sized businesses to close in the name of the need for forced, severe, social distancing and lock-downs. They’ve shattered society, suspended most civil liberties, and prohibited most activities and connections that keep people mentally and physically healthy. At the same time the officials have prioritized COVID-19 care over everything else and, as a result, severely limited billions of people’s access to life-saving healthcare services ranging from acquiring medication and blood transfusions to having organ transplants and cancer surgeries.

Rosemary Frei has an MSc in molecular biology from a faculty of medicine and was a freelance medical journalist for 22 years. She is now an independent investigative journalist in Canada. You can find her recent detailed investigative analysis of COVID here and follow her on Twitter.