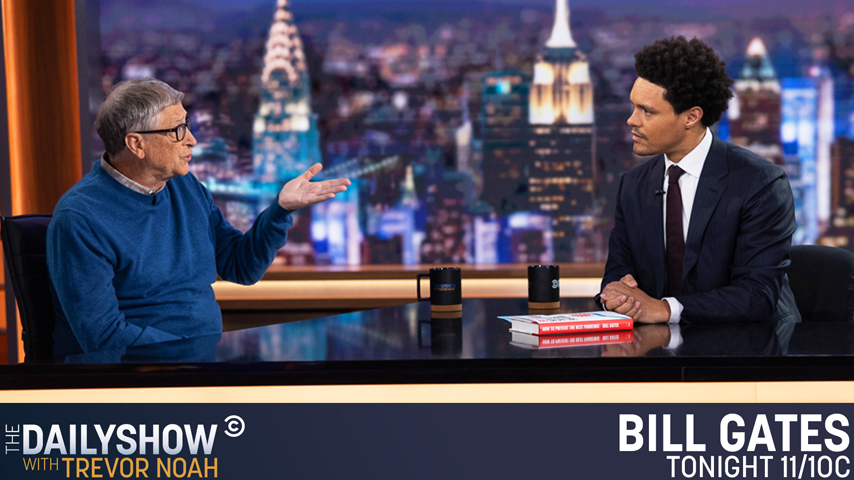 Bill Gates: “It’s quite clear in this case, [Covid] came across through animals. And almost all our diseases, like HIV, crossed over from chimpanzees in Africa quite some time ago; Ebola came from bats, this also, with one step in between came across from bats.” – “So it’s going to keep happening, particularly with climate change where we’re invading a lot of habitats. And you want to catch it as soon as you can.”

.@BillGates: “It’s quite clear in this case, [Covid] came across through animals. And almost all our diseases, like HIV, crossed over from chimpanzees in Africa quite some time ago; Ebola came from bats, this also, with one step in between came across from bats.” pic.twitter.com/TVfWdUJ1dt

Cont’d: "So it’s going to keep happening, particularly with climate change where we’re invading a lot of habitats. And you want to catch it as soon as you can."

Bill Gates in 2022: ‘If every country does what Australia did,’ the world could prevent the next pandemic

“Climate change is creating a new age of infectious dangers.” Climate Change Could Spark Future Pandemics – “The research, published in Nature, uses modeling to map how climate change could shift the geographic ranges of 3,100 mammal species and the viruses they carry by 2070. … The findings suggest that climate change could “easily become the dominant [human] driver” of cross-species virus transmission by 2070, the authors say.”

Marc Morano: “They want to keep both climate and COVID fears humming along to push their so-called solutions, so what better way than to merge the two issues!? Worried about COVID-19, then support the UN Paris climate pact, the Green New Deal, carbon taxes, etc. or else you are a gramma killer!”

Rebuttal: Science Crushes Claimed Link Between COVID & Climate– In reality, if a modestly warming Earth has any impact on viruses and pandemics, it is to make them less likely and less severe…Historically, we know that the Black Plague arose and ran rampant in Europe and elsewhere during the Little Ice Age.

H. Sterling Burnett: Climate alarmists and major media outlets are deceitfully exploiting the coronavirus pandemic to tell the public lies that climate change makes pandemics more likely and severe. In reality, the evidence is quite clear that warmer temperatures make pandemics and underlying outbreaks of viruses like the flu less frequent and severe. In a March 24 editorial in The Hill, Vinod Thomas, former direct-general of the Independent Evaluation Group at the World Bank Group, writes, “There is a link to pandemics, like COVID-19, and a warmer world….” Thomas’s claim follows many others in the media. For example, a recent Time magazine article states, “I have no evidence that climate change triggered this particular virus to jump from animals to humans at this particular time, or that a warmer planet has helped it spread. That said, it’s pretty clear that, broadly speaking, climate change is likely to lead to an uptick in future epidemics caused by viruses and other pathogens.” …

Numerous studies demonstrate that transmissible diseases like the flu and the coronavirus are far more prevalent and deadly during the late-fall, winter, and early spring, when the weather is cold and damp, rather than in the summer months when it is warm and dry. That is a reason the flu season runs from fall through early spring, and then peters out. And colds, while not unheard of, are less common in the summer as well.

Chapter 7 or the Non-governmental International Panel on Climate Change’s report of Climate Change Reconsidered: Biological Impacts details the results of dozens of peer reviewed studies and reports showing premature deaths from illness and disease are far more prevalent during colder seasons and colder climate eras rather than during warmer seasons and warmer climate eras.

In 2010, British Broadcasting Channel’s health correspondent Clare Murphy analyzed mortality statistics from the UK’s Office of National Statistics from 1950 through 2007 and found, “For every degree the temperature drops below 18C [64 degrees Fahrenheit], deaths in the UK go up by nearly 1.5 percent.”

In an article published in the Southern Medical Journal in 2004, W. R. Keatinge and G. C. Donaldson noted, “Cold-related deaths are far more numerous than heat-related deaths in the United States, Europe, and almost all countries outside the tropics, and almost all of them are due to common illnesses that are increased by cold.”

More recently, in a study published in the Lancet in 2015, researchers examined health data from 384 locations in 13 countries, accounting for more than 74 million deaths—a huge sample size from which to draw sound conclusions—and found cold weather, directly or indirectly, killed 1,700% more people than hot weather. No, that is not a typo – 1,700% more people die from cold temperatures than warm or hot temperatures.

Contrary to the fear-mongering assertions in The Hill and Time, the overwhelming scientific evidence shows it is cold, not heat, that kills. Therefore, a modestly warmer world, with shorter, less severe winters, should result in fewer premature deaths from disease, viruses, pandemics, hunger, and other natural causes.

What about the lab leak theory?

He is not qualified to comment, it is not quite clear… pic.twitter.com/CzTEErHfHS

Grand Solar Minimum: The Sun Has Entered Its ‘Lockdown’ Period Which Could Cause Freezing Weather, Famine, Increased Earthquakes and Catastrophic Volcanic Eruptions

WEF: Eco-anxiety a Driver of the Mental Health Pandemic