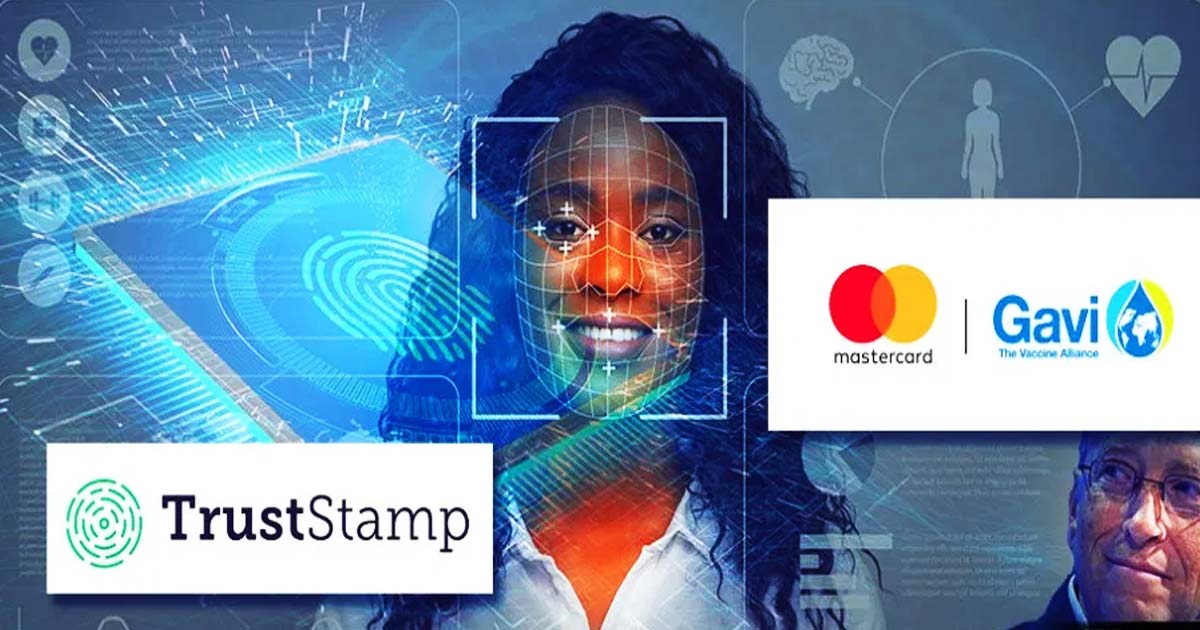 A biometric digital identity platform that “evolves just as you evolve” is set to be introduced in “low-income, remote communities” in West Africa thanks to a public-private partnership between the Bill Gates-backed GAVI vaccine alliance, MasterCard and the AI-powered “identity authentication” company, Trust Stamp.

We have been warning you night and day since March that this was coming, now it’s here, the first iteration of Bill Gates fever dream masterpiece of a vaccine tied to digital identification. Under the banner of his GAVI Vaccine Alliance and through a partnership with MasterCard, AI is being used from a company called TrustStamp that ‘creates tokenized identities from any biometric modality, or other identity data, from any source’. Of course, Bill Gates is launching this in Africa where his bought and paid for credentials from the WHO give him an open door to use the people of Africa as guinea pigs. Welcome to Phase 1, in just a little under 4 months from the date we told you it was ‘coming soon’.

In the old-time baseball games, stadium hawkers would walk up and down in the stands shouting, ‘Get your programs here! Can’t tell the players without a scorecard!’ So with that in mind, let’s unpack what we’re looking at here. Bill Gates created the GAVI Vaccine Alliance in 2000, he created the ID2020 Alliance in May of 2016, you can read the ID2020 UN Manifesto here. MasterCard, the company who has vowed to ‘take the world cashless‘ created the ‘Digital Wellness Pass‘ in 2018, and shortly after began financing an AI biometric ID company called TrustStamp. With me so far? Good.

All of these forces have been swirling together for quite sometime, but it took the manufactured hysteria surrounding the real virus COVID-19 to pull it all together. Now Bill Gates and company had advanced things to the point where they have a working model combining a vaccine with biometric digital identification, and it is rolling out in West Africa right now. After Africa it will be launched in Europe, Asia and then the United States. You can expect it to hit sometime between the end of 2020 and the first few months of 2021.  Are you ready for what comes next?

FROM MINT PRESS NEWS: The program, which was first launched in late 2018, will see Trust Stamp’s digital identity platform integrated into the GAVI-Mastercard “Wellness Pass,” a digital vaccination record and identity system that is also linked to Mastercard’s click-to-play system that powered by its AI and machine learning technology called NuData. Mastercard, in addition to professing its commitment to promoting “centralized record keeping of childhood immunization” also describes itself as a leader toward a “World Beyond Cash,” and its partnership with GAVI marks a novel approach towards linking a biometric digital identity system, vaccination records, and a payment system into a single cohesive platform. The effort, since its launch nearly two years ago, has been funded via $3.8 million in GAVI donor funds in addition to a matched donation of the same amount by the Bill and Melinda Gates Foundation.

In early June, GAVI reported that Mastercard’s Wellness Pass program would be adapted in response to the coronavirus (COVID-19) pandemic. Around a month later, Mastercard announced that Trust Stamp’s biometric identity platform would be integrated into Wellness Pass as Trust Stamp’s system is capable of providing biometric identity in areas of the world lacking internet access or cellular connectivity and also does not require knowledge of an individual’s legal name or identity to function. The Wellness Program involving GAVI, Mastercard, and Trust Stamp will soon be launched in West Africa and will be coupled with a Covid-19 vaccination program once a vaccine becomes available.

The push to implement biometrics as part of national ID registration systems has been ongoing for many years on the continent and has become a highly politicized issue in several African countries. Opposition to similar projects in Africa often revolves around the costs surrounding them, such as the biometric voter management system that the Electoral Commission of Ghana has been trying to implement ahead of their 2020 general election in December. Bright Simons, honorary VP of the IMANI policy think tank, has questioned the “budgetary allocation” for the new system, claiming that the “unnecessary registration of 17 million people all over again” represents millions of dollars “being blown for reasons that nobody can explain in this country.”

Trust Stamp’s biometric identity system, largely funded by Mastercard’s massive investment in the company in February, utilizes a technology it calls Evergreen Hash that creates an AI-generated “3D mask” based on a single photo of a person’s face, palm or fingerprint. Once this “mask” is created, much of the original data is discarded and encryption keys are created in place of a person’s name or other more traditional identifiers.

“ONLY A SMALL PERCENTAGE OF THE DATA THAT ORIGINALLY EXISTED IS IN THE HASH,” TRUST STAMP CEO GARETH GENNER HAS STATED. “WHAT YOU HAVE IS SOMETHING SAFER FOR STORING BECAUSE IT CAN’T BE USED TO DIRECTLY IDENTIFY YOU. NO ONE WOULD RECOGNIZE YOU IN THIS HUGE JUMBLE OF NUMBERS.” THE RESULT, ACCORDING TO GENNER, IS AN “IRREVERSIBLE NON-PERSONALLY IDENTIFIABLE INFORMATION” SYSTEM THAT “PROTECTS PRIVACY, REDUCES POTENTIAL FOR MISUSE AND ALLOWS EFFECTIVE INCLUSION WHEN THERE IS NO OTHER FORM OF LEGAL RECORD.”

Genner also explained in a recent press release that the unique “hash” is capable of “evolving” as a new hash with updated health information is created every time a child or individual gets a vaccine. Trust Stamp’s AI algorithms can accurately determine if different hashes belong to the same individual, meaning that “the hash evolves over time just as you evolve,” said Genner.

It is unclear how much the Wellness Pass initiative is motivated by public health concerns as opposed to free market considerations. Indeed, the GAVI alliance, largely funded by the Bill and Melinda Gates and Rockefeller Foundations, as well as allied governments and the vaccine industry, is principally concerned with improving “the health of markets for vaccines and other immunization products,” rather than the health of individuals, according to its own website. Similarly, Mastercard’s GAVI partnership is directly linked to its “World Beyond Cash” effort, which mainly bolsters its business model that has long depended on a reduction in the use of physical cash.

Trust Stamp also shares this market-focused vision for its digital identity system as the company has stated that it is looking for new commercialization options for its Evergreen Hash technology, specifically with prison systems. Talks with private and public prison systems have revealed an interest in their utilization of Trust Stamp’s technology to provide identification for individuals on parole “without making them pay for pricey ankle bracelets that monitor their every move,” as Trust Stamp’s platform would ostensibly provide that same function but in a “touchless” and less expensive manner.

For instance, contact tracing software originally introduced as part of the COVID-19 response has since been used by police departments across the U.S. to track protesters during the country’s recent bouts of protests and civil unrest. Similarly, a controversial Israeli tech firm currently being used in Rhode Island offers AI-powered predictive analytic to identify likely future COVID-19 hotspots and individuals likely to contract COVID-19 in the future, while also offering governments the ability to predict future locations of and participants in riots and civil unrest.

What is perhaps most alarming about this new “Wellness Pass” initiative, is that it links these “dual use” digital solutions to cashless payment solutions that could soon become mandated as anything over than touchless, cashless, methods of payment have been treated as potential modes for contagion by GAVI-aligned groups like the World Health Organization, among others, since the pandemic was first declared earlier this year. READ MORE


Bill Gates Starts The Gavi Alliance With One Billion Dollars

How long until New World Order with the present scenario?