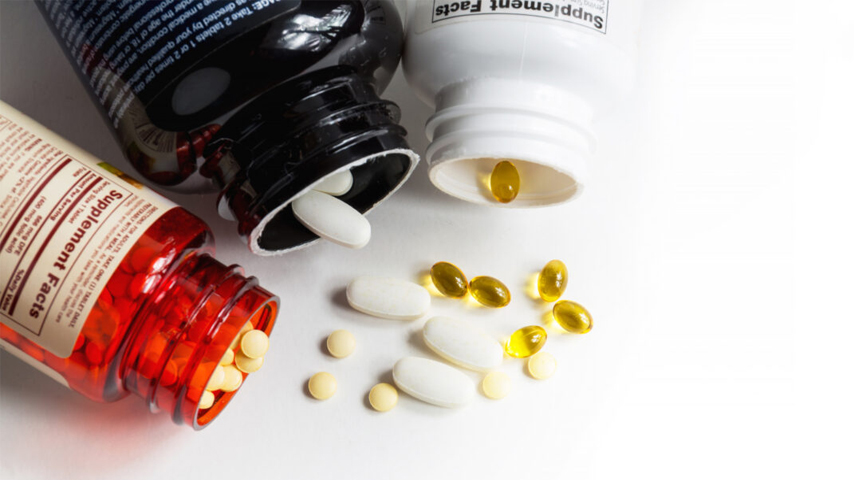 This new proposed legislation would technically ban most supplements, as few supplement makers have the financial resources required to meet drug approval requirements. (By Kudriavtsev Aleksei/Shutterstock)

The pharmaceutical industry wants nothing more than to put an end to one of its biggest competitors – vitamins and supplements. They’ve been trying for years to do it, but now they’re pulling out the stops to make it happen. Take action now to safeguard your access to supplements.

In the video above Alexis Baden-Mayer, political director for the Organic Consumers Association (OCA), interviews Gretchen DuBeau, the executive and legal director for the Alliance for Natural Health, who in addition to being a lawyer also has a master’s degree in applied healing arts, talk about Big Pharma’s efforts to eliminate one of its greatest competitors, namely nutritional supplements.

A discussion draft of the legislation was released by the United States Senate Health, Education, Labor, and Pensions Committee (HELP) in mid-May 2022. As reported by Vitamin Retailer:1

“On May 17 [2022], the United States Senate Health, Education, Labor, and Pensions Committee (HELP) released a discussion draft of its legislation to reauthorize FDA user fees for drugs, biologics and medical devices package, which includes the controversial and divisive Durbin-Braun premarket approval concept and more that would be damaging to the industry, according to the Natural Products Association (NPA).2

‘The NPA is significantly concerned with Chair Murray and Republican Leader Burr who failed to reject the radical and dangerous legislation from Senators Durbin and Braun that would require premarket approval for dietary supplements and weaken key privacy protections of the Bioterrorism Act, which protects the dietary supplement supply chain,’ said Daniel Fabricant, Ph.D. president and CEO of the NPA.

‘Last time I checked, dietary supplements are not drugs, biologics or medical devices, so why Congress or anyone supporting nongermane legislation that will only add costs to consumers who are doing all they can to stay healthy is extremely troubling.

Groups who [sic] have supported this legislation, have stated there are protections for technical disagreements with the FDA like those with hemp, CBD, NAC, and several other products. However, if this legislation were to pass, it is abundantly clear these products would be eliminated from the market.’”

For years, the drug industry, with the U.S. Food and Drug Administration’s support, has tried to get nutritional supplements off the market. One of the most often used tactics has been to try to reclassify them as drugs.

Usually, they would target specific nutrients that stood in their way of profits, but legislation such as the Durbin-Braun premarket proposal would allow the drug industry to monopolize the market in one fell swoop.

The fight over vitamin B6 (pyroxidine) is one example of how Big Pharma tried to eliminate a natural substance that stood in the way of a drug patent. In 2007, Medicure Pharma submitted a citizen’s petition to the FDA in which it argued that any dietary supplement containing pyridoxal 5′-phosphate — vitamin B6 — were “adulterated” under the Federal Food, Drug and Cosmetic Act, article 402(f).3

In essence, Medicure wanted all vitamin B6 products banned, because they undermined the company’s incentive to continue the development of its drug version of B6.

Medicure had gotten wise to vitamin B6’s effectiveness against ischemia (inadequate blood flow), and decided to make a drug out of it by simply renaming the vitamin “MC-1.” They entered it into the drug bank and then argued that B6 supplements contained “their” MC-1. The drug bank even admits the renamed vitamin B6, i.e., MC-1, is:4

“… a biologically active natural product which can be regarded as a chemical entity that has been evolutionarily selected and validated for binding to particular protein domains.”

The main reason why drug companies engage in this kind of sleight of hand is that once a substance is classified as a drug, you can jack up the price by 1,000% over the supplement’s typical retail.5

FDA Cracking Down on NAC

Perhaps the most recent example of the FDA trying to shut down easy access to nutritional supplements was its 2020 attack on N-acetylcysteine (NAC). NAC has been a widely-used dietary supplement for six decades, yet the FDA suddenly decided to crack down on it in late July 2020 — right after it was discovered how useful it was for the prevention and treatment of COVID-19.6

According to the FDA, NAC was excluded from the definition of a dietary supplement because it had been approved as a new drug in 1963.7 But if that was the case, why did they wait until 2020 to take action?

As reported by NPI at the time,8 there were more than 1,170 NAC-containing products in the National Institutes of Health’s Dietary Supplement Label Database when the FDA started sending out warning letters9 to companies that marketed NAC as a remedy for hangovers.

Members of the Council for Responsible Nutrition also worried the FDA might start to target NAC more widely. So far, that hasn’t happened, but Amazon immediately stopped selling all NAC products after those warning letters went out, whether the sellers marketed it as a hangover remedy or not.

Also, the selection of “hangover” for those warning letters seemed arbitrary at best. The fact is that several scientists had called attention to NAC’s benefits against COVID, and shortly afterward, the FDA came up with this ridiculous excuse to limit its availability of it. It just smacked of conflict of interest.

Another Way Big Pharma Is Seeking to Take Over

Bountiful, in turn, owns brands like Solgar, Osteo Bi-Flex, Puritan’s Pride, Ester-C and Sundown, all of which are now under Nestlé’s control. The Bountiful brands alone generated net sales of $1.87 billion in the 12 months ending March 31, 2021, so the $5.75 billion agreement to acquire a majority stake, signed in August 2021, didn’t necessarily burn a big hole in Nestlé’s pocket. According to J.P. Morgan analyst Celine Pannuti, quoted by Natural Products Insider:11

“Through the acquisition of The Bountiful Co., Nestlé can build a ‘leading position’ in the ‘fragmented category’ for vitamins, minerals and supplements, which ‘has delivered the highest and most consistent growth in consumer health care over the past 10 years.’”

In all, a mere 14 mega corporations — many of them drug companies — now own more than 100 of the most popular supplement brands on the market. The graphic below is from Neal Smoller, PharmD, the holistic pharmacist’s website.12

It doesn’t show the ownership of all available brands, but it gives you an idea of just how small the ownership circle has become. As noted by Smoller, many competing brands are even owned by the same corporation, rendering the notion of free market competition null and void. 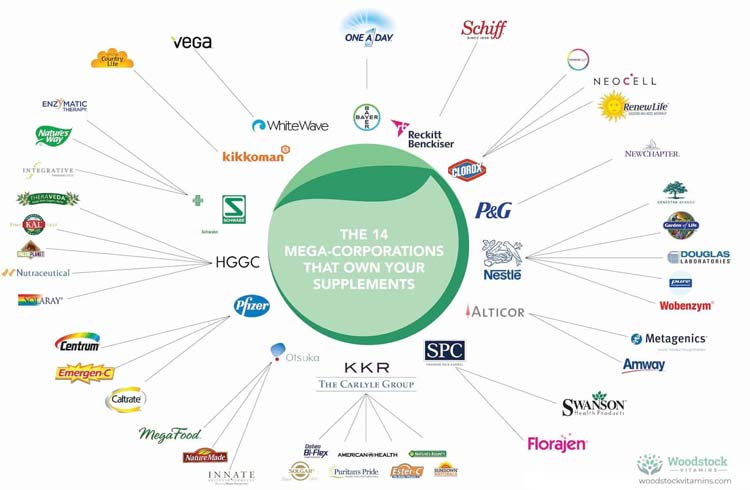 Importantly, owning the lion’s share of supplement companies puts the drug industry in a unique position to get rid of them whenever they so desire. They could intentionally make the company tank simply by cutting advertising, for example. Cutting quality could have a similar effect, while simultaneously cheating customers who rely on dietary supplements for optimal nutrition and health.

Most important of all, however, this monopoly over the supplement industry gives drug companies enormous regulatory influence, and that’s a way by which they could eliminate independent supplement makers who can’t compete financially. Indeed, that seems to be what the Durbin-Braun proposal is all about.

This new proposed legislation would technically ban most supplements, as few supplement makers have the financial resources required to meet drug approval requirements. The only ones with pockets deep enough to do that would be the mega-corporations.

Putting vitamins and nutrients through the drug evaluation and approval process would automatically eliminate many supplements from the market and result in higher retail prices for whatever remains. It would also allow drug companies to rename basic nutrients, label them drugs, and jack up the price even further.

We cannot let this happen. Dietary supplements are FOOD, plain and simple. They should not be treated as drugs, which must undergo rigorous testing to evaluate effects and safety. Supplements have a long history of near-spotless safety and don’t need drug-style testing.

Supplements Are the Safest Foodstuffs Available

Deaths associated with the use of dietary supplements are extremely rare compared to the death toll from prescription drugs, yet supplements are routinely singled out as being potentially dangerous,13,14 either due to lack of testing, lack of regulation, or both. The thing is, supplements don’t need safety testing, as they are food, and they are, in fact, fully regulated.

In 2015, CBC News published a Marketplace report15 in which they claimed a number of supplement makers had ripped off customers by failing to live up to the claims on their labels. Two months later, they had to retract report,16 when it was proven their tests were inaccurate. That’s just one example of how the pharma-owned media tries to give supplements a bad rap.

Meanwhile, in the real world, not a single death has ever been reported as a direct result of taking a supplement. On the contrary, data provided in a 2012 report by the UK-based Alliance for Natural Health International (ANHI), showed nutritional supplements are the safest foodstuffs available.

Your risk of dying from an herbal product or dietary supplement is less than 1 in 10 million, comparable to your risk of being killed by lightning. ANHI also calculated that adverse reactions to pharmaceutical drugs are 62,000 times more likely to kill you than nutritional supplements.17

So, the one thing that can be conclusively said about supplements is that they may be the safest category of any consumable product. On the whole, junk food and drugs are FAR more likely to harm or kill you.

What’s more, the lack of human trials does not mean supplements are unregulated. They’re regulated by both the FDA18 and the Federal Trade Commission19 (FTC). The FDA regulates the finished product and individual ingredients, while the FTC regulates the advertising of supplements. So, while not regulated as drugs, but rather as food, they are fully regulated.

Take Action NOW to Protect Your Supplements From Disappearing

As noted by NPA president and CEO, Daniel Fabricant:20

“The war is far from over. We need America’s health and wellness advocates to continue writing their members of Congress through the NPA Action Center. Grassroots involvement over the coming weeks is absolutely critical to defeating this radical and dangerous proposal.”

I join Fabricant in urging you to contact your senators and urge them to oppose the Dietary Supplement Listing Act of 2022, and its inclusion in the FDA Safety Landmark Advancements Act. A list of contact numbers can be found here. On that same page, the NPA also has a sample script with key talking points.

If you take supplements and you want to continue the freedom to take them in the future, it is VITAL that if you live in the U.S. that you let your representatives know. Not only would I email them in the link below (be sure to customize it and change it) but I would also call your representatives! It worked previously and will work now, but you need to be involved.