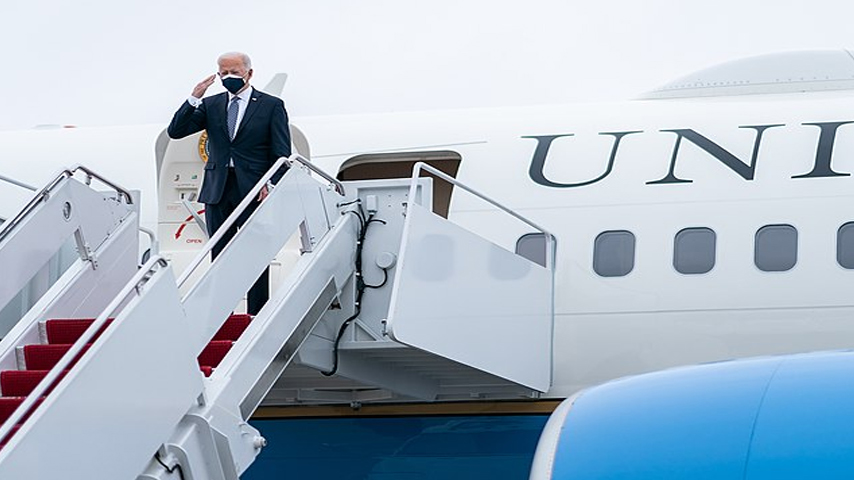 Joe Biden announced on Monday that the US would go to war with China if they were to invade Taiwan.

When asked by a reporter if the U.S. would defend Taiwan if it were attacked by China, Biden responded: ‘Yes … That’s the commitment we made.'”

His handlers quickly rushed to put out a statement walking it back, as the AP reports:

A White House official said Biden’s comments did not reflect a policy shift for the United States, a point echoed more firmly by Defense Secretary Lloyd Austin, asked by reporters if Biden’s answer indicated the U.S. would do more to help Taiwan than it has done to help Ukraine and whether the U.S. was making a commitment to send troops to help Taiwan in the event of an invasion.

“As the president said our One China policy has not changed,” Austin said at the Pentagon. “He reiterated that policy and our commitment to peace and stability across the Taiwan Strait. He also highlighted our commitment under the Taiwan Relations Act to help provide Taiwan the means to defend itself. So, again, our policy is not changed.”

But Biden’s words drew a sharp response from mainland China, which has claimed Taiwan to be a rogue province.

He added, “China will take firm action to safeguard its sovereignty and security interests, and we will do what we say.”

The White House moved swiftly to clarify President Joe Biden’s comments, but his assertion Monday that the U.S. will militarily defend Taiwan in the event of a Chinese invasion attempt may actually pave the way to conflict in the Taiwan Strait.

It’s the second time since October that aides have had to walk back Biden’s comments that appear to reverse the longtime policy of “strategic ambiguity” regarding U.S. willingness to defend Taiwan. […]

Observers say Biden’s verbal commitments to defend Taiwan may encourage rather than deter Chinese aggression against Taiwan. Some analysts argue that it could prompt preemptive military action by Beijing while China’s military offensive capabilities outstrip U.S. capacity to defeat them.

“I still think this is Biden’s gut instinct reflected in mindless wording, not a policy reversal, but it is needlessly unsettling … if Biden keeps doing this, it could be a ‘big deal’ indeed,” Winston Lord, former U.S. Ambassador to China, told POLITICO in a statement. “We should maintain strategic ambiguity. We can deter Chinese attacks on Taiwan without destroying our ambiguous one-China policy, which has been a core element of our relations with Beijing for a half century.”

The U.S. relationship with Taiwan is spelled out in the U.S.-China Three Communiqués, the 1979 Taiwan Relations Act and the 1982 Six Assurances. The TRA commits the U.S. “to maintain the capacity of the United States to resist any resort to force or other forms of coercion that would jeopardize the security, or the social or economic system, of the people on Taiwan.” None of those documents specifically obligate the U.S. to military intervention to protect Taiwan in the face of a PRC invasion. But the TRA suggests an active U.S. role in maintaining the island’s status quo.

“It’s simply not correct to say that we have a commitment to come to Taiwan’s defense … the fact that [Biden] keeps misstating the policy ends up undermining deterrence,” said Bonnie Glaser, Asia Program director at the German Marshall Fund of the United States. “It might well provoke the attack that we are trying to deter because Xi Jinping could conclude that China should act while it still has a conventional advantage. He might feel pushed into a corner by a U.S. direct challenge to Beijing’s claim to sovereignty over Taiwan.”

A Rand Corporation report published Monday backs Glaser’s assessment of the balance of power across the Taiwan Strait. The report warns that the U.S. currently lacks the capacity to deter and defeat an economic blockade of Taiwan, let alone a full-scale invasion of the island. “The force requirements for the United States are likely to be heavy. The majority of U.S. reactions require sizable military forces. This force needs to be available shortly after the United States decides to react if the response is to be in any way effective,” the report said.

Biden seems to be constantly baited by reporters into agreeing with anything they ask but the prospect of the US intervening militarily in defense of Taiwan sounds quite likely to me. If anything, this was a “senior moment” where he slipped up and told the truth (like we saw with George W. Bush last week).

Biden’s pledge not to put boots on the ground in Ukraine and risk World War III with Russia was clearly a lie. The White House in yet another provocation is now reportedly debating sending troops to Kyiv as cannon fodder to “help guard” our reopened embassy.

We’ve seen this song and dance before.

"For god's sake this man can not remain in power!"

After denying NATO enlargement has anything to do with destabilizing Russia, Biden closes his Poland address with a stentorian demand for regime change in Moscow.

Last week, the Times of Israel reported that the Biden regime, in a first, will hold military exercises with Israel “simulating a strike on Iran’s nuclear facilities.”

The US Air Force is joining apartheid Israel to do military exercises simulating entering Iranian territory and launching airstrikes.

The US and Israeli militaries are blatantly threatening Iran with war.https://t.co/j8upZD96FR

An IRGC Colonel, allegedly identified as Hassan Sayad Khodayari, has been shot 5 times and killed in Tehran by Israeli Mossad.

Iranian media claims "to have arrested some of the plotters" pic.twitter.com/8dg2Tr0EA5

In related news, the CIA added two stars to its Memorial Wall that “commemorates officers who gave their lives in service.”

CIA added two stars today to its Memorial Wall, which commemorates officers who gave their lives in service. There are now 139 stars on the wall. pic.twitter.com/4gI8hiusOo

The officers were not named and no information has been shared on where they were killed.

The New York Times reported last year that the CIA was getting their ass handed to them by China, Russia, Iran and Pakistan, with dozens of informants/agents being captured, executed, or turned into double agents.

One would think that after the debacle in Afghanistan our occupiers would take a step back from picking fights and antagonizing the Eastern world but instead, they’re just doubling down.