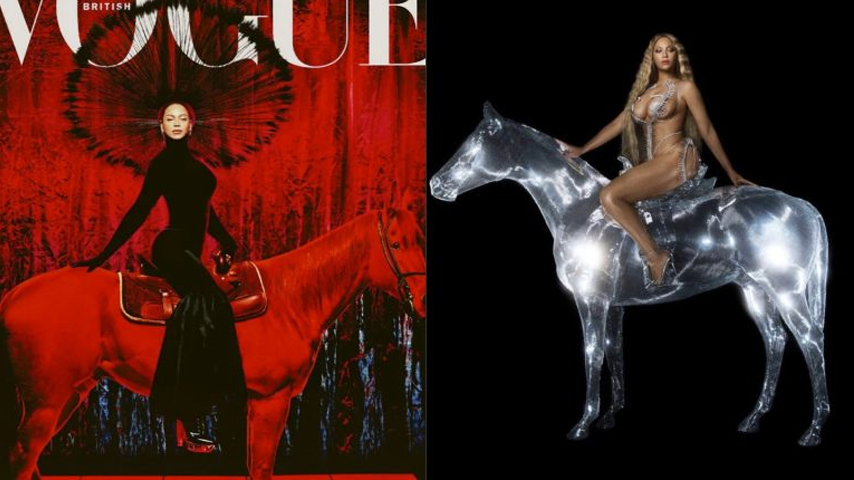 We first had the red horse (war) and released today, Beyoncé is on a black/ pale (holographic) horse (famine & death).

Stars and other popular MSM’s are currently full on the Four Horsemen of the Apocalypse theme, especially the Red (War; Vogue UK July 2022) and black/pale (holographic) (Famine & Death).

Is this a coincidence? No. It’s more like a subliminal message sent to the crowds!

They are trying to convince people we’re in the end times hence all the symbolism. They want you to believe this is the apocalypse because they will try to make us worship their fake savior (anti-christ). This all connects with project Bluebeam and the whole NASA UFO hype lately.

The truth is we aren’t but once we get to the end times they’ll be trying to convince people we’re in the age of grace (the time we’re living in now).

1 The next thing I saw was this. When the lamb had opened one of the seven seals, I heard one of the four living creatures say in a voice like thunder, ‘Come!’

2 And, as I watched, there was a white horse. Its rider was holding a bow. He was given a crown, and he went off winning victories, and to win more of them.

4 And another horse went out, fiery red this time. Its rider was given permission to take peace away from the earth, so that people would kill one another. He was given a great sword.

5 When the lamb opened the third seal, I heard the third living creature say, ‘Come!’ As I watched, there was a black horse. Its rider held a pair of scales in his hand.

6 I heard something like a voice coming from the midst of the four living creatures. ‘A quart of wheat for a denarius!’ said the voice. ‘And three quarts of barley for a denarius! But don’t ruin the oil and the wine!’

7 When the lamb opened the fourth seal, I heard the voice of the fourth living creature say, ‘Come!’

8 As I looked, there was a pale horse, and its rider’s name was Death. Hades followed along behind him. They were given authority over a quarter of the earth, to kill with the sword, and with famine, and with death, and by means of earth’s wild animals.

They actually represent the four ways in which the powers that be make $$$ and control the world.

Prepare for the end times!