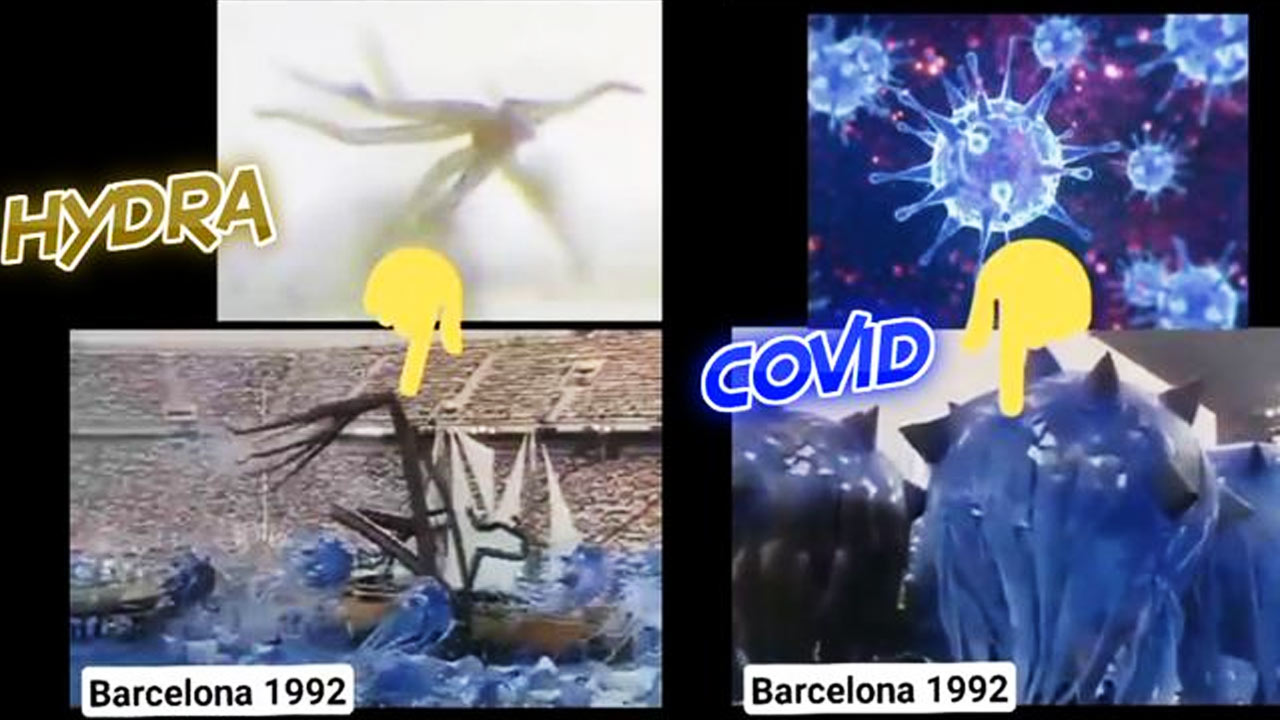 Just when I thought the COVID-19 deception couldn’t get any darker, the video clip below from Barcelona’s 1992 Olympic opening ceremony actually features COVID-19 and Hydra Vulgaris.


The Hydra is named after the serpent in Greek mythology that grew two new heads for each one cut off.  Hydra Vulgaris is a tiny, tentacled, palm tree-shaped, sentient freshwater invertebrate, comprised of stem cells that appear to renew themselves. In other words, Hydra Vulgaris contains the genomic code for eternal life. Over a period of twenty days, the organism recreates itself.

Dr. Carrie Madej first discovered the entity while examining numerous vials of the injection.” I looked at both the Moderna mRNA and Johnson & Johnson viral vector DNA “vaccines” under a compound microscope. I used white light and it was normal room temperature in the lab. Colors appeared over time in what I was observing. Then all of a sudden, purple, blue, and green lights appeared and disappeared. Some nanotech engineers told me afterward that the liquids have the properties of superconducting materials, analogous to “injectable computer systems.” “It was alive. It lifted itself up off the glass slide and its tentacles were moving. The organism pointed its tentacle up through the lens like it was self-aware. It knew we were looking at it. Some people contacted me and Stew Peters and said the creature looked like something called Hydra Vulgaris, one of six model organisms that cannot die. It continually regenerates itself. You can put it in a blender and it will re-assemble itself afterward. I was so shocked by what I saw that I cried most of that night.”

According to Assistant Professor Celina Juliano, with the Department of Molecular and Cellular Biology,

“As far as we can tell, it doesn’t age or die, You can cut little pieces out of the animal and it will regrow and maybe the most amazing thing is that you can dissociate the animal into single cells, mix them all up, put them back in a ball and a new Hydra will just grow out of it.”

Discovered in 1744 by Abraham Trembley the creatures ability to regenerate itself is still an unknown.  Professor Juliano added “If you or I were injured, say our hands were cut off, there’s a specific genetic program that is activated and is required to heal the wound, but the hand wouldn’t grow back. That same genetic program is activated after injury throughout the animal kingdom, but in some cases, instead of triggering scarring, it triggers regeneration and thus the missing body part is replaced.”

Hail Hydra! Immortal Hydra! We shall never be destroyed! Cut off one limb and two more shall take its place! We serve the Supreme Hydra, as the world shall soon serve us!” This was the catchphrase first used in a comic book called Strange Tales #135, dating back to August 1965, and the premiere of S.H.I.E.L.D, the arch enemy of Hydra. “Hail Hydra!” was also proclaimed in 2014 Captain America: The Winter Soldier”.  Isn’t it strange how fiction is but a reflection of reality?

Stem cells are the cornerstone of any living entity. As the embryo grows, stem cells take on individual characteristics. Over time they lose their ability to replace aging cells and eventually die. Conversely Hydra stem cells regenerate and are also known as Hydra the eternal embryo. Somehow the Hydra is able to keep it’s genome while experiencing large scale cell division. The Hydra is in a constant state of rebirth.

So what is the purpose of injecting Hydra Vulgaris into the human body? Could it be consuming the nervous system? Considering each Hydra has four to twelve tentacles which extend from it’s mouth, grabbing ahold of an internal food source isn’t an obstacle. Anything that cannot be digested is regurgitated through the mouth. Because it lacks a backbone the Hydra Vulgaris can bend  over and attach itself to other surfaces.

The injection is also filled with a cornucopia of elements and metals detrimental to the human body. Aluminum, a leading cause of Alzheimer’s disease. Formaldehyde, also known as embalming fluid. Thi-mer sal, which is forty-nine point six percent mercury.  Acetone, an element present in nail polish remover.  And of course the aforementioned aborted fetus stem cell lines.

Follow the symbols. The world is ruled by symbols. For example, the symbol of medicine is the caduceus. The traditional symbol of Hermes features two snakes winding around a winged staff.  I’m sure it’s just another coincidence the symbol of the Baphomet has a staff protruding from his crotch, and two snakes winding around the staff. The Baphomet also features two female breasts. In essence, the Baphomet is a hermaphrodite, a person or animal having both male and female sex organs. On the arms of the Baphomet are the words “Solve” and “Co-ag-ula” which means to break down and rebuild or “The Great Work of Alchemy.” Spiritually, Alchemy is the occultic science and black magic art of unifying matter and spirit.

Smart dust is the embedded hidden ingredient in chemtrails. It is a system of many tiny micro-electromechanical  (MEMS) nanobots or microscopic robots that can detect light, temperature, magnetism, chemicals, and vibrations. These nanobots can be operated on a wireless Wi-Fi computer network and broadcast their unique radio-frequency identification.

Was Wuhan a beta test for smart dust activation via the 5G network?  And is it possible the human body could be internally digitized and controlled remotely?  Imagine man transformed into a radio antenna.

To give credibility to the idea of vaccine via inhalation, a Nebraska virologist SHi-Hua Ziang is developing a COVID-19 vaccine that would be delivered directly to the respiratory tract as a nasal spray, prompting an immune response directly at the site where the virus is causing COVID-19.

And for those who don’t opt for the vaccine injection or nasal spray is there is a possible non-voluntary option of forced vaccination via smart dust contained within chemtrails?

The end game for the Luciferian elite is to control the remaining serf class from a centralized Quantum Beast Computer. Web searches, contacts, social media, thoughts, and emotions will be uploaded into a collective hive mind. Segmented algorithmic patterns will accurately predict future behavior. This will also supplant speech with organic telepathic communication. It will be a singular, collective, universal New World Order, spiritually plugged into Lucifer’s matrix. Shared knowledge without individual thoughts or opinions. Uncritical conformity creates a technological singularity of collective intelligence. A seven year technocratic tribulation.