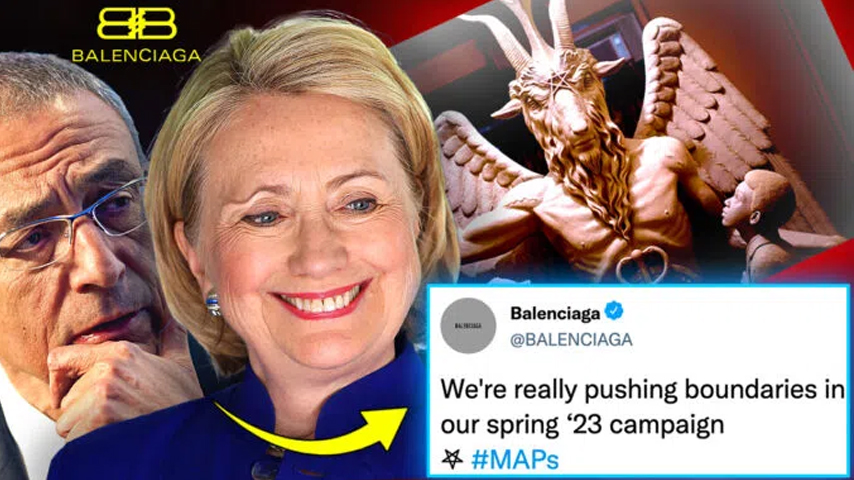 The case struck down a portion of the Child Pornography Prevention Act (CPPA) of 1996, ruling that “virtual” child pornography must be considered protected speech.

In an Instagram post, Balenciaga wrote, “We sincerely apologise for any offense our holiday campaign may have caused. Our plush bear bags should not have been featured with children in this campaign. We have immediately removed the campaign from all platforms.”

“We apologise for displaying unsettling documents in our campaign,” the company stated. “We take this matter very seriously and are taking legal action against the parties responsible for creating the set and including unapproved items for our Spring ‘23 campaign photoshoot.”

I thought people were trolling, but nope. It’s real. Maybe this is why Balenciaga left Twitter. They don’t want to be held accountable. Yes, these are children holding teddy bears dressed in bondage outfits. pic.twitter.com/zBlACUiZjo

The company also claimed ignorance when it came to the Supreme Court case prop, adding that it would be pursuing legal charges against those responsible for featuring it.

Fact checkers and mainstream media came to the defense of the luxury brand, claiming the scandal is nothing but an “absurd conspiracy theory.”

Pedophiles in the media called the reporting on Balenciaga a “conspiracy theory.”

Meanwhile in reality, Balenciaga is either appalled or pretending to be, as the campaign was real. pic.twitter.com/hF56JcBR9Y

But if that was the case, why would Balenciaga apologize and delete their social media accounts?

#Balenciaga 2022 deleted their posts once again on Instagram pic.twitter.com/UywmqWh05E

Image is everything for luxury fashion brands. Ad campaigns are major events involving months of work for thousands of people and millions and millions of dollars in budgets. Are we really supposed to believe Balenciaga didn’t know what they were putting out into the world?

“Frightening how many adults must have been involved in this,” one Twitter user remarked. “Parents, photographers, creative directors, copywriters, design agency staff, producers, managers, advertisers… and not one of them thought, ‘hang on a minute?’”

Don’t hold your breath waiting for an apology or explanation from Balenciaga’s muse, Minttu Vesala.

Balenciaga had previously departed Twitter, presumably in protest against Elon Musk, with critics pointing out that the decision could have been influenced by Musk cracking down on the platform being used to facilitate child exploitation.

Because the deeper you dive into this scandal, the worse it gets.

Let’s track back to Balenciaga’s claim that they were unaware of the unsettling nature of the campaign and are pursuing legal action against those responsible.

The fashion photographer hired by Balenciaga for the collection has claimed that he is being made a scapegoat.

Galimberti responded to Balenciaga’s threat of legal action by telling Newsweek: “I am not in a position to comment [on] Balenciaga’s choices, but I must stress that I was not entitled in whatsoever manner to neither choose the products, nor the models, nor the combination of the same.”

In other words, Galimberti is claiming Balenciaga threw him under a bus and that the company itself was responsible for creating the pedo-friendly photo shoot setup.

The argument that the scandal represents something rotten within Balenciaga is bolstered by other evidence.

As a Twitter user highlighted, in a separate Balenciaga photo shoot, a book by Michael Borremans appears on the desk next to a model. Borremans is a Belgian artist obsessed with child sacrifice, cannibalism, and couture, and he is very popular in high society.

Some of Borremans’ paintings depict naked children who appear to be traumatized or involved in some kind of abusive environment.

#Balenciaga had this Michael Borremans book laying out in the office desk to the side of red-head model… look at these themes yall… can’t make this up even if I tried!!! pic.twitter.com/GaFACxtviJ

If you go to these tweets and click on the photos, you’ll see that there are images from that Michael Borremans book, documenting an exhibition of his called “Fire From The Sun”. From a review of the Hong Kong exhibition:

The perceived meaning of the works is difficult to voice or uncomfortable to admit.

In some of the paintings the children are in the process of disappearing: phantom bodies not quite removed from their gruesome acts. These ghostly figments remind us of the artist’s hand (another detached extremity) and its control over what we see and what we don’t. More poetically, the visible existence of “disappearance” suggests the impossibility of a clean escape from a bloody episode. Importantly, Borremans chose to depict children too young to have clear memories. In some fictional future, they might be unreliable carriers of this formative origin story or trauma. Are these portraits of what it means to try and erase the past, unsuccessfully?

… While the fire and (probable) cannibalism imply some sort of ritual, the works are most chilling as sketches of random violence, causal and instinctual. The depicted characters break with one typecast (angelic) while fitting another (demonic).

Borremans artwork is undeniably disturbing, but those who have been paying attention to the tastes of the elite will be having flashbacks to the art found in the Podesta brother’s homes.

But it gets even worse. We all know the elite like to use signs and symbols to flaunt their depravity to the world and mock ordinary people they consider nothing more than “useless eaters.”

Balenciaga’s campaign is loaded with subtle messaging of this kind. For example, one of the photos from the campaign has Balenciaga spelled on tape as BAALenciaga…

Baal was the ancient Canaanite god, to whom children were sacrificed – usually the first-born child of the sacrificer, who would be incinerated alive. One of his titles was “Baal-zebub,” or Lord of the Flies.

Look at this drawing on the right side of that photo, on the wall:

Balenciaga knew exactly what it was doing here. It is simply not possible that one of the most sophisticated global high fashion brands was fooled.

Do you want to know why Jeffrey Epstein was still celebrated by the rich and famous, even after he was convicted of sex with minors? There’s probably a connection between that and what Balenciaga has done here. Among the super-rich, this stuff is normal.