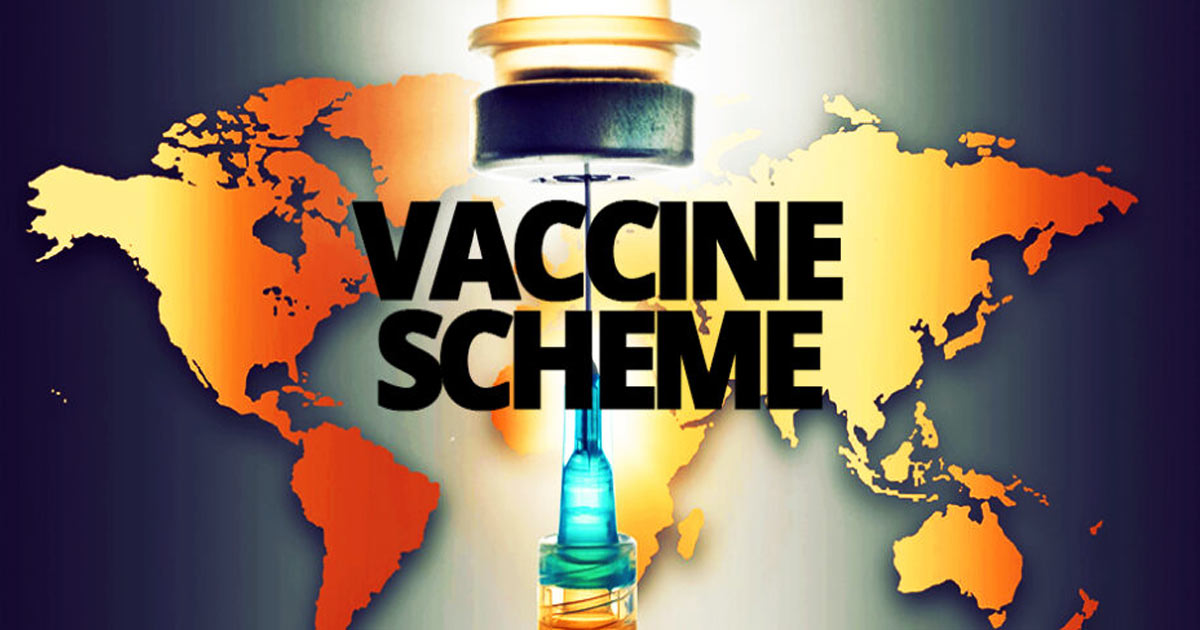 The planet could have a year or less before first-generation Covid-19 vaccines are ineffective and modified formulations are needed, according to a survey of epidemiologists, virologists, and infectious disease specialists.

This is so funny, and by ‘funny’ I mean deadly, end times, super-serious and life-threatening kind of funny if there is such a thing. Now that they have convinced half a billion people to take two rounds of the COVID jab, including people who swore last year they would never take it, today comes the ‘update’ that within a year all those jabs will be ineffective, and it will all have to be done over again. And again, and again, and again, I think you see where this is leading, don’t you?

“So they poured out for the men to eat. And it came to pass, as they were eating of the pottage, that they cried out, and said, O thou man of God, there is death in the pot. And they could not eat thereof.” 2 Kings 4:40 (KJB)

Let me break it down if you’re still a tad puzzled about all this. Bill Gates has sworn he will not rest until all the world receives his jab, and his jab will rock your world. His jab will come with implantable biometric identification from his other company called the ID2020 Alliance. They spent all of 2020 making us afraid, now you can expect to have the permanent vaccine that never goes away no matter what happens with the COVID virus.

This is global grooming for the Mark of the Beast for those people who will be left behind after the Pretribulation Rapture of the Church takes place. Make sure that’s not you by clicking here.

IF YOU’RE LEFT BEHIND AFTER THE PRETRIBULATION RAPTURE OF THE CHURCH, YOU MAY NEVER GET ANOTHER CHANCE TO GET SAVED

FROM THE GUARDIAN UK: Scientists have long stressed that a global vaccination effort is needed to satisfactorily neutralize the threat of Covid-19. This is due to the threat of variations of the virus – some more transmissible, deadly, and less susceptible to vaccines – that are emerging and percolating.

The grim forecast of a year or less comes from two-thirds of respondents, according to the People’s Vaccine Alliance, a coalition of organizations including Amnesty International, Oxfam, and UNAIDS, who carried out the survey of 77 scientists from 28 countries. Nearly one-third of the respondents indicated that the time-frame was likely nine months or less.

Persistent low vaccine coverage in many countries would make it more likely for vaccine-resistant mutations to appear, said 88% of the respondents, who work across illustrious institutions such as Johns Hopkins, Yale, Imperial College, London School of Hygiene & Tropical Medicine, and the University of Edinburgh.

“New mutations arise every day. Sometimes they find a niche that makes them more fit than their predecessors. These lucky variants could transmit more efficiently and potentially evade immune responses to previous strains,” said Gregg Gonsalves, associate professor of epidemiology at Yale University, in a statement.

“UNLESS WE VACCINATE THE WORLD, WE LEAVE THE PLAYING FIELD OPEN TO MORE AND MORE MUTATIONS, WHICH COULD CHURN OUT VARIANTS THAT COULD EVADE OUR CURRENT VACCINES AND REQUIRE BOOSTER SHOTS TO DEAL WITH THEM.”

The current crop of vaccines that have received emergency authorizations in different parts of the world is a mix of old and fresh technologies. Of particular interest is the mRNA approach, employed by the companies Pfizer/BioNTech and Moderna, which can be tweaked at speed (within weeks or months) to accommodate new variants – however, manufacturing hiccups are always a potential problem.

But crucially, they are unlikely within reach of poorer countries, given that this set of vaccines are far more expensive and have comparatively onerous temperature storage requirements.

Meanwhile, resource-rich countries like the UK and US have administered at least one vaccine dose to more than a quarter of their populations and have secured hundreds of millions of supplies. In contrast, nations such as South Africa and Thailand haven’t even managed to get shots in the arms of 1% of their populations. Some countries are yet to administer their first dose.

Covax – the global vaccine initiative coalition aimed at countering so-called vaccine nationalism – hopes to be able to supply at least 27% of the population of lower-income countries with vaccines in 2021.

“THE URGENCY WE SEE IN RICH NATIONS TO VACCINATE THEIR POPULATIONS, AIMING FOR ALL ADULTS BY THE SUMMER, IS SIMPLY NOT REFLECTED GLOBALLY. INSTEAD, WE HAVE COVAX AIMING FOR PERHAPS 27% BY THE END OF THE YEAR IF WE POSSIBLY CAN MANAGE IT – THAT IS SIMPLY NOT GOOD ENOUGH,” SAID MAX LAWSON, HEAD OF INEQUALITY POLICY AT OXFAM AND THE CHAIR OF THE PEOPLE’S VACCINE ALLIANCE, WHICH IS CALLING COVID-19 VACCINE DEVELOPERS TO OPENLY SHARE THEIR TECHNOLOGY AND INTELLECTUAL PROPERTY TO BOOST PRODUCTION.

“Where is the ambitious global goal? A goal that the science tells us is needed?’ I think that’s the key point – we just don’t see the ambition that would go along with it, widespread recognition that limited vaccination is quite dangerous.” READ MORE