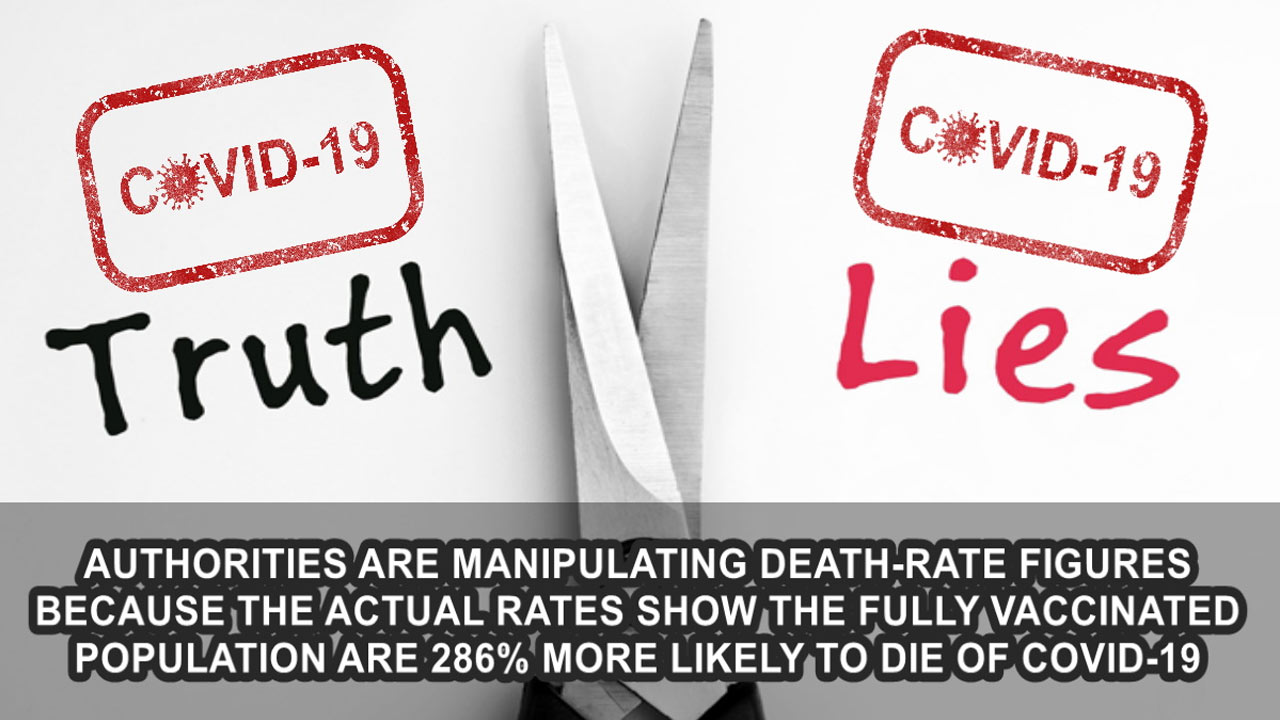 Age-readjusted Scottish Death Rate figures from Public Health Scotland combined with age-stratified English Infection Rate Figures from the UK Health Security Agency in a Grand Union to show that fully vaccinated over the 30s are over 286% more likely to die of Covid-19 than unvaccinated over 30s.

* Denotes data taken from the November 17th report in which PHS found 80,000 more Scots in total than they found a week later – which is a tragedy.

PHS should remove all those under 12 from the unvaccinated group because they are ineligible for vaccination and they do not die in significant numbers. But instead, it leaves them in and then applies the terrible Age Standardised Mortality Rate formula, which we have seen, by comparison with ONS all-cause mortality rates, skews the data in favor of vaccination considerably – see https://dailyexpose.uk/2021/11/06/uk-gov-lying-and-hiding-the-fact-covid-19-vaccinated-are-developing-ade/

So instead we use the government vaccination stats to remove the under 12s – https://coronavirus.data.gov.uk/details/vaccinations.

The English Death figures from Weeks 42-45 are 675 unvaccinated and 2,875 vaccinated- https://assets.publishing.service.gov.uk/government/uploads/system/uploads/attachment_data/file/1034383/Vaccine-surveillance-report-week-46.pdf

Here are the English Case figures for Weeks 43-46, which are October 25th – November 21st from the UKHSA Vaccine Surveillance Report of Week 47. We take the midpoint as Nov 7th.

Scottish deaths are defined as being with Covid listed as an underlying or contributing cause of death and taken from table 20 of the PHS Covid-19 Statistical Report November 24th.

English deaths are defined as being within 28 days of a positive Covid test and taken from table 10 of the UKHSA Vaccine Surveillance Report week 47.

3. The Death Rate Ratio unvaxxed to doubly vaxxed is 1.45 in England and 1.04 in Scotland. This will be due to England using the daft metric of anyone who dies from anything within 28 days of a covid test, whilst Scotland uses the more medically sound definition of anyone who dies with covid-19 on the death certificate as either the underlying cause or a contributing cause of death.

So PHE (now the UKHSA) has been effectively exaggerating the life-saving performance of the vaccines by using a daft definition of Covid death. The more accurate position, taken by Scotland, is that being unvaccinated gives one presently a 4% greater chance of dying from Covid than being vaccinated in raw data terms rather than a 45% greater chance (having removed the under 12s from both groups).

So that removes a further 2.35m from serious contention for death in the unvaxxed out of 6,236,935 in England, which is 38% of them. So we can make the data pretty age-independent by regarding the unvaxxed group as being perhaps 45% smaller than it actually is (to account for the lower vaccination percentages in all the younger age groups – bearing in mind that delta is not the same as alpha and beta. It is less lethal to older people and more lethal to younger people).

The figure ignores deaths due to vaccine side effects, which Pfizer, Moderna the CDC, the FDA, the UKHSA, and PHS all studiously ignore. These can easily overcome that 89% in the short term and can swamp it in the medium term, with the vaccine-mediated cardiovascular, immune system, and nervous system degradation. Indeed UK ICUs have recently reported an increase in immune-compromised patients – https://www.dailymail.co.uk/health/article-10224691/Has-jab-farce-landed-hundreds-intensive-care.html

4. The Death rates per 1,000 cases are the truly astounding result from this analysis. The English figure is fairly meaningless due to the daft definition of a Covid death. But the Scottish figure is far more reality-based and shows that doubly vaccinated people are 520% more likely to die if they get Covid-19 than unvaxxed people. Admittedly that figure is again confounded by age in the same way that the death rate per million people is. But again that confounding will be largely fixed by regarding the unvaxxed group as being 45% smaller than it actually is, which reduces the Death rate per case ratio from 520% to 286%.

So all things considered doubly vaccinated people are 286% more likely to die of Covid after infection than unvaccinated people. That does drive a coach and horses through the concept that vaccines do not prevent infection but do stop people dying from Covid. With the proper definition of a Covid death, the Scottish figures show the reverse.

What is happening here is that the vaccines do prevent infection and death immediately after vaccination. more by putting the immune system on red alert when it is overwhelmed by genetically programmed spike protein production, than by teaching it to recognize and attack the Wuhan alpha spike protein, which it is never going to see these days.

It is true to say on average that, throughout the 4 week period, the vaccinated are less likely to be infected and less likely to die of Covid. But this statistical whitewash is only achieved because Pfizer is cannily (and despicably) arranging for a continual supply of vaccine virgins in the form of younger and younger children, who benefit from the initial vaccine efficacy, for a long enough time to keep the overall figures just above the water.

The children make it easier for government stats departments to hide the longer-term detrimental effects of the vaccines. The young are not being sacrificed to protect the old. They are being sacrificed to cover up the danger to the old and to them.

Make no mistake. When the US government bans discussion of election fraud it is because they have committed election fraud and need to hide it. In fact, whenever a political election is very close, the chances are that the side that just wins has cheated just enough to win. Because true polls do not give 49.9% to 50.1% results very often at all.

Likewise, when Pfizer stops its 3-year trial after 6 months, and when Moderna stops its 2¼ year trial 28 days after the 2nd jab, it is because they are committing medical fraud and need to hide it. They, more than anybody, know how dangerous these vaccines are. That is why they stopped the trials. Nobody spends fortunes on big expensive clinical trials without doing a small mini-trial for their own benefit first to see what the truth is.

I must reiterate two fundamental principles of immunology here which the media have canceled completely.

1. You never start a vaccination program during a pandemic. Because you massively increase the chances of teaching the virus to evade the vaccine. That may be the origin of the delta variant.

2. Vaccines cannot lose efficiency. They are a digital switch, a quick training course for the immune system. They are supposed to operate for a couple of weeks, the length of a typical viral infection, and then they are supposed to clear off. They have no work to do after that. It is not possible for them to lose efficacy over time because they are one-shot devices. Either they train the immune system or they do not. That training is finished in the first 2 weeks after injection.

Global Depopulation and the Botswana Variant

Here is how you kill billions of people with biological warfare.

1. Release a souped-up flu which requires a vaccination.
2. Design the vaccine to be a Trojan, which protects against the souped-up flu but also progressively destroys the immune system’s capability to fight future viruses.
3. Vaccinate as many people as you possibly can
4. Once the Trojan has had enough time to destroy most of the viral defenses of most vaccinated people, and just when people are beginning to realize what is going on, release your piece de resistance. A gain of function super deadly flu with a massively increased death rate.

On Wednesday, November 24th the UK Daily Mail, which has been doing a sterling job on Covid, reported that the Botswana Variant has been discovered. It is called the nu variant. Nu is the Greek letter for n. It has 32 mutations, many of which are to the spike protein and improve its lethality and infectivity. It is a dead ringer for a man-made ultimate gain of function terminator 2 viruses. Time will tell if it is the viral solution.