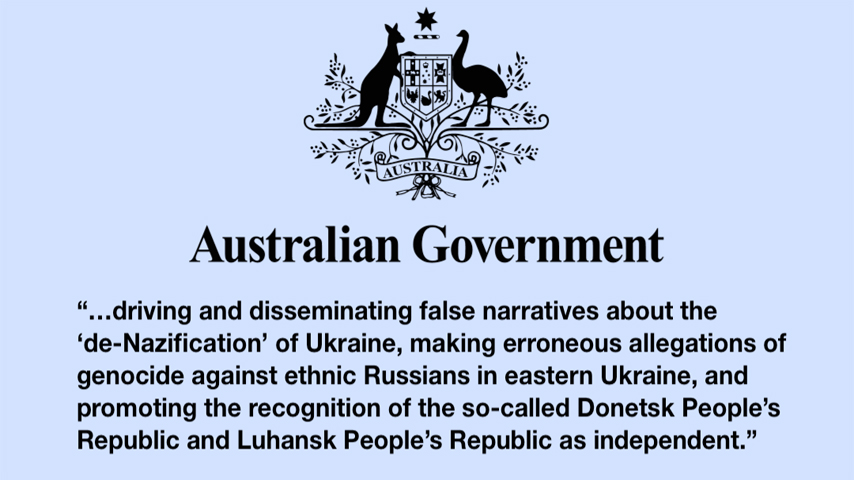 In the western world’s mad rush to ramp up censorship and dangerous cold war escalations against Russia over its invasion of Ukraine, the Australian government has done what it always does and raised the bar of authoritarianism a click above everyone else in the room.

“The Australian Government is sanctioning 10 people of strategic interest to Russia for their role in encouraging hostility towards Ukraine and promoting pro-Kremlin propaganda to legitimize Russia’s invasion,” reads a new statement from Australian Foreign Minister Marise Payne. “This includes driving and disseminating false narratives about the ‘de-Nazification’ of Ukraine, making erroneous allegations of genocide against ethnic Russians in eastern Ukraine, and promoting the recognition of the so-called Donetsk People’s Republic and Luhansk People’s Republic as an independent.”

A report by the Australian Associated Press and the Daily Mail says that the men targeted with these new sanctions are “journalists, authors or Putin’s press officers.” This move follows earlier waves of sanctions directed at the Russian government, military and financial institutions, as well as economic sanctions on the Luhansk and Donetsk regions in Ukraine.

Obviously, a government in a purportedly “free” country sanctioning anyone for sharing any ideas anywhere on earth is outrageous, no matter how stupid or fictional they might be. Anyone on earth should be free to say that Ukraine is ruled by reptilian space wizards orchestrating a global conspiracy to steal the earth’s ivermectin if they want to without being sanctioned by the Australian government.

But the fact that the ideas cited by the Foreign Minister — de-Nazification, the genocide of ethnic Russians, and independence for the DPR and LPR — are fairly common opinions that can be argued using facts and evidence makes this move a lot more disturbing.

I personally don’t find it truthful to claim that the invasion of Ukraine has anything to do with “de-Nazification” myself; that just sounds like the sort of thing you say to make a bloody invasion look noble, and Ukraine’s neo-Nazi issues would surely have been a non-issue for Putin if Kyiv was aligned with Moscow rather than Washington. But even MSNBC is reporting that “Ukraine has a genuine Nazi problem” that cannot simply be ignored, and a recent report by The Grayzone details how intimately neo-Nazi militias are intertwined with the nation’s power structure. So this isn’t some preposterous conspiracy theory; it arises from known facts that people do need to talk about.

The claim of genocide in the Donbas may not be a consensus reality that has been firmly established via official channels, but neither is the claim of genocide in China’s Xinjiang province, yet we saw that assertion waved around as absolute fact by the entire western political/media class in the lead-up to the Beijing Olympics. It’s just a simple fact that 14,000 people have died in the fighting against Donbas separatists since a US-backed coup toppled Ukraine’s government in 2014 and that most of those deaths have been on the side of the ethnic Russian separatists. Whether or not this technically constitutes genocide has not been established, but it’s a debate that is both valid and worthwhile.

According to UN figures, from 2018 to 2021, 81.4% of civilian casualties in the Donbas war came in rebel-held territory. 16.3% were in Ukrainian gov't-controlled territory.

This is one key reality of the war that US media doesn't report. Too inconvenient. https://t.co/Pjf7fg30af pic.twitter.com/KSMHwdaR6K

The most egregious citation on Payne’s list is “promoting the recognition of the so-called Donetsk People’s Republic and Luhansk People’s Republic as an independent.” The idea that rebel-held regions in eastern Ukraine should be recognized as independent republics is pure political opinion; the Australian government has no more legitimacy in labeling it “propaganda” than they would on people’s opinions about the morality of abortion. Yet it’s being cited as a justification for targeted sanctions.

This comes after Australian television providers SBS and Foxtel dropped RT in the frenetic push to expand censorship throughout the western world, a move Payne explicitly praised in the aforementioned statement with an acknowledgment that the Australian government is working with online platforms to censor unauthorized content.

“The Australian Government continues to work with digital platforms such as Facebook, Twitter and Google to take action to suspend the dissemination of content generated by Russian state media within Australia. SBS and Foxtel have already announced the suspension of Russia Today and NTV broadcasting,” the statement says.

This is getting so, so ugly so very, very fast. Just the other day a young Australian-Russian man was ejected from the audience of the popular television show Q+A simply for expressing his support for Putin’s war, something we’ve never seen happens in any of the controversies about the insane American military invasions that this country has gotten itself involved in over the years.

Stan Grant kicks an Australian-Russian man out of #QandA for questioning the media's pro-Ukraine/anti-Russia coverage. pic.twitter.com/tKylsWVeCK

Whether you agree with these opinions or not, you’d have to be blind not to see the dangers of speech getting stomped out which doesn’t align with the authorized opinions of the government and the globe-spanning empire of which it is a member state. It is not valid to simply label dissenting ideas “propaganda to legitimize Russia’s invasion” and then shut them down; in a free society, we’re meant to debate ideas and explain our positions to convince others that they are correct.

An ostensibly free and democratic nation labeling basic political opinions and ideas about points of geopolitical contention “pro-Kremlin propaganda” and implementing punitive sanctions in response has implications that are uncomfortable to think about. As an Australian who frequently disagrees with Canberra about unaligned foreign governments including Moscow, I am frankly feeling a bit nervous that I might myself be designated a person “of strategic interest to Russia” and penalized in some way for “disseminating false narratives”.

Securing more and more control over the ideas and information that people share with each other is an objective of unparalleled importance of the oligarchic empire loosely centralized around the United States. It is an intrinsically valuable goal; anywhere control of speech can be expanded is strategically useful for that expansion in and of itself, independent of the excuses made to justify it. Hopefully, we all collectively find a way to unplug each other from the imperial narrative matrix before they can secure total control.