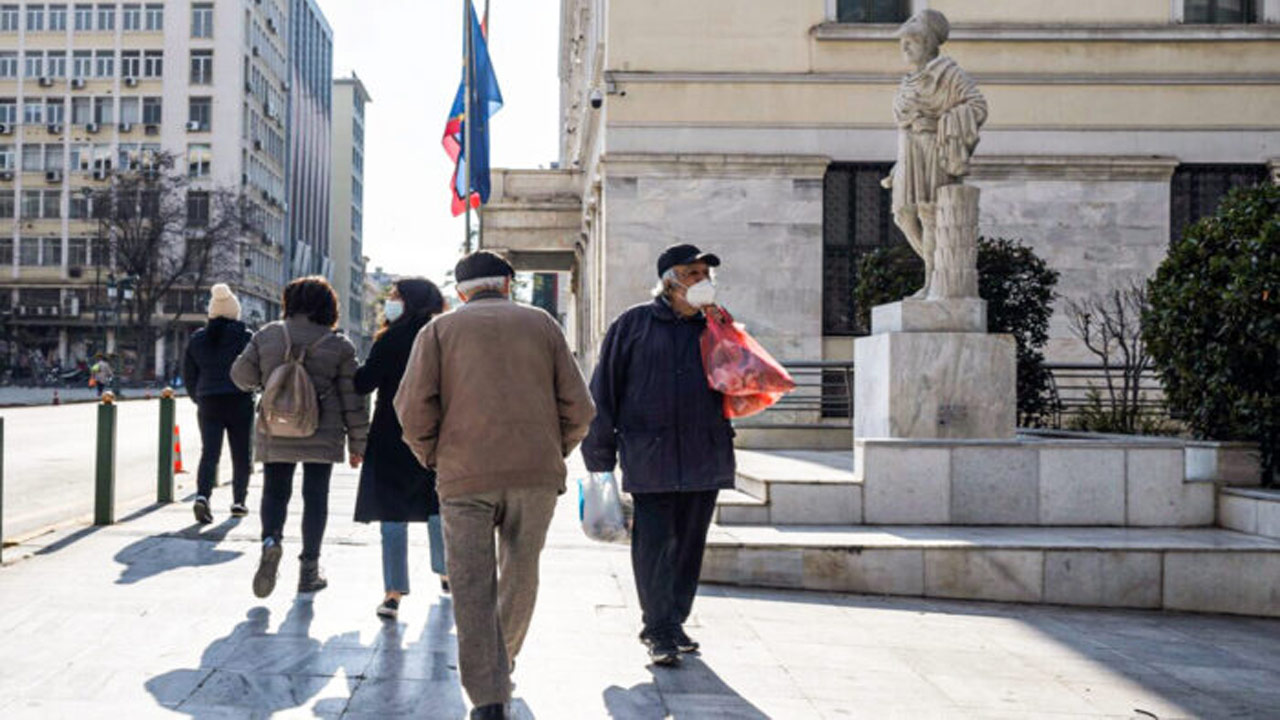 An elderly man wearing a face mask to curb the spread of coronavirus, walks past Athens’ municipality building and in front of the statue of the ancient statesman Pericles of Athens’ Golden Age, on Jan. 17, 2022. (Petros Giannakouris/AP Photo)

Greece imposed a vaccination mandate Monday for people 60 and older, as the country’s vaccination rate remains below the European Union average and a spike in infections has put sustained pressure on Greek hospitals.

Older people failing to get vaccinated will face penalties, starting at a 50-euro ($57) fine in January and followed by a monthly fine of 100 euros ($114) after that.

About two-thirds of Greece’s 10.7 million people are fully vaccinated, while the EU average is just over 70 percent. But COVID-19 deaths and daily hospitalizations have increased following the arrival of the highly contagious omicron variant, though pressure on ICU capacity has eased slightly.

Health Minister Thanos Plevris said the fines would be collected through the tax office with the money going to help fund state hospitals.

“The age factor is important because of its impact on the public health service,” Plevris told private Open TV on Sunday.

Greece imposed a vaccination mandate for health care workers last year. And starting Feb. 1, vaccination certificates for adults will expire after seven months unless the holder receives a booster shot.

New infections surged sharply in early January but have eased over the past week.

The vaccination mandate for the 60 and older age group was announced in late December and, according to government data, 41.5 percent of the 530,000 people targeted by the measure are now fully vaccinated. Opinion polls suggest strong public support for the mandate, but some lawmakers across party lines have questioned the legality of singling out a specific group. The government defended the measure as constitutional, citing a 2020 high court decision allowing public daycare centers to refuse children who had not been vaccinated for childhood illnesses.

Government spokesman Giannis Oikonomou said only people with legitimate health exemptions, those who had suffered a recent infection and applicants for home vaccination appointments that were delayed would be spared the fine.

“The law will be fully enforced,” Oikonomou said.

Greece has the seventh oldest population in the world, as measured by the share of residents aged 65 and over, according to the U.S.–based Population Reference Bureau. It has seen nearly 22,000 virus-related deaths in the pandemic.

In Europe, things are so bad that the unvaccinated have been forced to create underground groups that signal the location of vaccination police just to be able to eat a meal, buy groceries or have any semblance of a normal life. The persecution of the unvaccinated is so bad that a two-class system has erupted, much like the societal split that came about in the 1930s when Nazism was imposed on a large section of European society. It grows worse by the day, and Emmanuel Macron likes it like that.

Europe’s loud, rule-breaking unvaccinated minority are falling out of society

FROM CNN: Now he leads Mass-Voll, one of Europe’s largest youth-orientated anti-vaccine passport groups. Because he has chosen not to get vaccinated, student and part-time supermarket cashier Rimoldi is — for now, at least — locked out of much of public life. Without a vaccine certificate, he can no longer complete his degree or work in a grocery store. He is barred from eating in restaurants, attending concerts or going to the gym.

“PEOPLE WITHOUT A CERTIFICATE LIKE ME, WE’RE NOT A PART OF SOCIETY ANYMORE,” HE SAID. “WE’RE EXCLUDED. WE’RE LIKE LESS VALUABLE HUMANS.”

As the pandemic has moved into its third year, and the Omicron variant has sparked a new wave of cases, governments around the world are still grappling with the challenge of bringing the virus under control. Vaccines, one of the most powerful weapons in their armories, have been available for a year but a small, vocal minority of people — such as Rimoldi — will not take them.

Faced with lingering pockets of vaccine hesitancy, or outright refusal, many nations are imposing ever-stricter rules and restrictions on unvaccinated people, effectively making their lives more difficult in an effort to convince them to get their shots. In doing so, they are testing the boundary between public health and civil liberties — and heightening tensions between those who are vaccinated and those who are not.

“WE WILL NOT ALLOW A TINY MINORITY OF UNHINGED EXTREMISTS TO IMPOSE ITS WILL ON OUR ENTIRE SOCIETY,” GERMANY’S NEW CHANCELLOR, OLAF SCHOLZ, SAID LAST MONTH, TARGETING THE VIOLENT FRINGES OF THE ANTI-VACCINE MOVEMENT.

Vaccine passports have been in place for months to gain entry to hospitality venues in much of the European Union. But as Delta and Omicron infections have surged and inoculation rollouts have stalled, some governments have gone further. Austria imposed Europe’s first lockdown for the unvaccinated and is scheduled to introduce mandatory shots from February 1. Germany has banned unvaccinated people from most areas of public life, and the country’s Health Minister, Karl Lauterbach, warned in December that: “without mandatory vaccination, I do not see us managing further waves in the long term.”

AND FRANCE’S PRESIDENT EMMANUEL MACRON LAST WEEK TOLD LE PARISIEN NEWSPAPER THAT HE “REALLY WANTS TO PISS OFF” THE UNVACCINATED. “WE’RE GOING TO KEEP DOING IT UNTIL THE END,” HE SAID. “THIS IS THE STRATEGY.”

“On Monday I was with 50 people eating in a restaurant — the police wouldn’t be happy if they saw us,” Rimoldi told CNN, boasting of illegal dinners and social events with unvaccinated friends that he likened to Prohibition-era speakeasies — but which public health experts describe as reckless and dangerous. Attendees will hand in their phones to avoid word of their meetings getting out, and will visit restaurants, cinemas or other venues whose owners were sympathetic to their cause, he said. “Yes, it’s not legal, but in our point of view the certificate is illegal,” Rimoldi added unapologetically.